Rob Catteneo takes charge of his family’s business, selling ice cream in a British seaside town, and finds their oldest competitor, Bianchi’s, is now being run by the youngest son, Chez. Chez was once a schoolmate but never a friend, because of their old family rivalry.

Rob’s interested in both a business partnership with Bianchi’s and a more personal relationship with Chez. But Chez is deep in the closet, terrified his very traditional family will discover he’s gay. A night together in a hotel gives Rob insight into Chez’s fears and vulnerability and he’s sure he can help, but Chez resists further business and personal overtures.

On an important summer weekend for both firms, Rob keeps a cool head in an ice cream emergency and helps Chez out, leaving Chez open to future propositions. Will this be the first step on the road to a sweet future together? 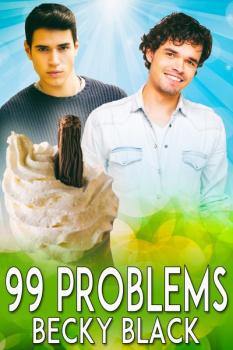 "You're being very generous with your advice," Chez said. "Considering we're rivals."

"A good rival keeps me on my toes."

"Right. I --" Chez stopped and stared as they heard the sound of a car outside the roller door. "Who's that?" Rob saw a look of panic in his eyes and on instinct hurried over to turn off the light. A car door slammed. In the moonlight from the skylights above, Chez took on a deer-in-the-headlights expression of frozen terror. "I can't have anyone see me here. If it gets back to my family ..."

"Come here." Rob grabbed him by the arm and steered him to the ice cream van awaiting its service. Fortunately the back door was unlocked. Rob urged Chez inside and climbed in after him. Both ended up kneeling on the floor, peeking over the sliding window serving hatch. A small door beside the big roller door opened and a man came in. Rob relaxed. Just one of his drivers, Sam. He had one of his kids with him, a teenage girl.

He headed off across the floor. At Rob's side, Chez ducked down out of sight, his breathing very fast. Sam went on through to the staff areas. Probably picking up something from his locker. The kid stayed by the door, messing about on her phone. Neither of them noticed the two men in the van.

"Why are you hiding?" Chez whispered.

Good question. Rob was the boss and could be here any time of the day or night.

And the thought of being in close quarters with Chez had been an incentive. He dropped lower, below the level of the window, sitting on the floor beside Chez. He felt the heat of him, and the scent. Vanilla. He must have been working in the parlour's kitchen with Liliana and carried the scent in his clothes and hair. A man couldn't grow up in the ice cream business and not find the scent of vanilla evocative of home, of love.

Chez shouldn't make him think of home. Twenty years ago the Catteneos and the Bianchis would have called themselves worse than rivals. Enemies. But those times were long gone. Such nonsense belonged in the past. Rob reached out for a handful of Chez's shirt and pulled him in close for a kiss.

Chez gasped and made a brief movement as if to pull away. For a second Rob feared he'd misread the other man, that he wasn't gay, despite the looks and the vibe Rob got from him. If he'd got it wrong, he might revive all the bad feeling between their families.

But no. After the initial shock, Chez responded. He sighed, lips parting, eyes closing, inviting, eager. Rob pulled him closer until they pressed together. He wanted Chez so badly he'd happily forgo a comfy bed and take whatever Chez offered right there on the floor of an ice cream van. Rock it till the chimes jingled "The Teddy Bear's Picnic" at full blast.

Lost in the kiss, the scent and feel of Chez, the surging of desire in his belly, he was only aware they'd ended up on the floor with Chez on his back and Rob on top of him when the slam of a door made Chez gasp and push him away.

They heard footsteps across the concrete floor, some barely coherent words, then the outside door closing. Silence. Rob looked down at Chez.

"Want to take this back to my flat?"

"No!" Chez moved suddenly, scrambling out from under him. "I can't."

"Chez ..." Damn. Was that old family rivalry too strong? Would it feel like sleeping with the enemy for him? "Nobody has to know."

He climbed out of the van and brushed dust from his clothes. He dug his car keys out of one pocket, patted the others, then looked around in a worried way. Rob spotted his phone lying on the floor of the van and handed it to him. "Thanks. And thanks for the advice. I have to go." Rob knelt up and watched him almost run across the floor to the door. He peeked out. Outside, the sound of Sam's car leaving faded away. Only when it was silent out there did Chez give Rob one last look and leave.

An Arranged Mating for Micah (MM)
Marcy Jacks
In Shelf
$3.99
Tweets by
sirenbookstrand