After Joey Bacelli’s father passes away he becomes the Boss of the Bacelli crime family. The “family” is made up of violence, gore, and death, and it’s all Joey has ever known. He always gets what he wants, except for the one woman that continuously denies him.

Marra Santos knows who Joey really is, but she wants him regardless of the fact he is a dangerous mob Boss. When she witnesses a murder and Joey comes to the rescue, he isn’t the Knight in Shining Armor she hopes for. In fact, he kills the man that was about to put a gun to her head.

Once back at Joey’s place he can’t let her leave, not until the threat to her has been dealt with. He wants her, badly, and will show her they are meant for each other, despite the dark and dangerous life he leads. 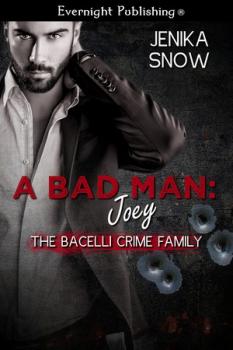 “For the past year you’ve been refusing me, Marra, and making me want you even more because of it.” He cupped her cheek with his other hand, and smoothed his thumb over her bottom lip. “So red and swollen from my kiss,” he said while looking at her mouth. “I can’t tell you what that does to the possessive side of me, baby, knowing that I was the one to make your lips look like that.” He slowly lifted his gaze back to her. While looking at her, he took his hand, slid it over her collarbones, down between her breasts, and stopped for a second. The weight of his hand just resting there, adding a bit of pressure, made her nipples harden further.

He moved his hand down to her belly, left it there for a second, and then to her utter shock he placed his hand right down her pants. She didn’t wear a bra and panties, because the ones she’d had on were either covered in blood or felt nasty on her body. But right now she was wishing she had another barrier on. He moved his hand right through her folds, and she grew wetter at the fact he could feel how aroused she really was despite her situation. He touched her pussy as if he owned it. And God, did it feel good.

He growled low in his throat, as if an animal had been released inside of him. “I can feel how much you want me, and even if you want to deny it with your mouth and words, this right here,” he slipped a finger deep inside of her and she gasped out. “This right here, shows me that you want everything that I am.” He kissed her again, hard, possessively, and with so much force that their teeth clashed together. He broke the kiss for only a second and said in this deep growly voice, “This pussy is mine.” He moved his mouth down her neck, over the top of one of her breasts, and then he was sucking her nipple right through the shirt. He growled again. “And these are mine.” He cupped her other breast, and tweaked the nipple while he continued to suck on her. “You’re all mine, to own, to control, to pleasure, and to protect.”

Marra didn’t know what to say. He was still thrusting a finger in and out of her, and all she could do was hold onto the counter behind her and bite her lip to stop from telling him to give her more. But his rough breathing, the way he pressed his body to hers, letting her feel how hard he was for her, had Marra opening her eyes. Realization moved through the thick haze of arousal, and she pushed him back. He was resistant at first, groaning out obscenities, but finally he relented. The bulge that pressed against his slacks was impressive, but when he advanced again, she held her hand up to stop him. 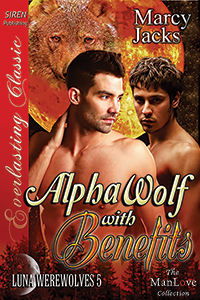 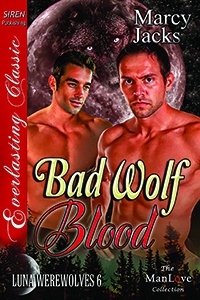