Handsome, confident, a touch arrogant, Prince Orlando thinks that now he has found Sleeping Beauty, his kiss will wake her at once. When it does not, he realizes he has much to learn about life, and love.

Princess Rosie, trapped in her enchanted sleep, dreams of a mysterious man. Is he a rescuer, or a nightmare? She must fight to recover herself, and all before Christmas, for time is running out. 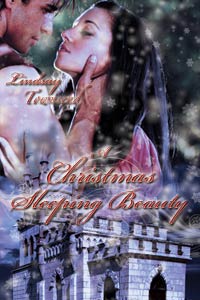 The girl curled on her side, fast asleep in the middle of the twilight-blue silken sheets, was glorious, fit for any prince, even for him. Small, with long, glossy black hair, she had a lithe, flawless figure and the most perfect pink little mouth. Lips sweeter than sugar cane, he wagered, congratulating himself for a third time.

He rolled her onto her back and straightened out her slim, taut limbs. She did not stir. Her breath was sweeter than peppermint and her skin like ivory, tinted faintly with rose. In this gloomy chamber, unlit by windows or torches, she glowed like a pearl, as if lit from within. Her nightdress was white and trimmed with lace, the kind of old-fashioned gown his grandmother used to wear. He imagined himself ripping it from her, plundering those lush pink lips for kiss after kiss as she gasped her thankfulness and gratitude, and he made her his, right here in the great bed. And after that, of course, the kingdom would be his, for her parents would make him their heir.

A swift marriage in the cathedral before Christmas, and all would be well. He would hire tutors for her, to teach her the modern ways, but if she was as soft and obedient as his grandmother had been, then all would be very well indeed.

And I am going to marry her, he thought.

He tugged off his boots and sank onto the bed. He would kiss her forehead first and then her mouth, he decided. He caught her wrists in one of his large hands, so she would not scratch him when she woke.

Her flesh was warm and fragrant. A small pulse thudded in her temple as she responded to him. The weariness of his long hunt for this fabled kingdom dropped away as he knelt on top of her, careful not to crush her with his weight, and lowered his head.

A snap behind him had him sprawling off her, knife ready, shielding his prize.

He relaxed, realizing a log had collapsed in the fireplace, and turned back.

"None shall take her from you, eh, Prince?"

Out of nowhere, a woman had appeared beside the carefully laid fire. She was nearly as tall as himself, with iron-gray hair and a handsome, if sharp, face. She was robed in the latest fashion and carried a sheath of yellow iris which she proceeded to arrange into a tall blue vase beside the bed. "I suppose you tried to defend her, at least."

Orlando fingered his dagger. "Who are you, woman? Some kind of ghost?"

"There." She gave the flowers a final shake. "These are some of her favorites. Have you brought flowers?"

"For the princess!" She gave him an expression he had last seen on the harassed face of his Latin tutor. "Do you expect to woo her with nothing?"

Cursing under his breath, even as he felt the heat of his temper pound in his head, Prince Orlando decided things had gone far enough. He slammed his knife back into its sheath. Next, defying the mysterious stranger, or rather ignoring her, he lifted the sleeping young woman into his arms and kissed her firmly on the lips.
Her head fell back a little, but she slept on.