I have everything. Rich parents, popular friends, hot boyfriend. An expectation to be a colorless, snobby stereotype. I don’t like maintaining that image, but I get it. I know the drill. Until one day when I can’t stop bleeding, and that shell of a charmed life shatters in the wake of my new reality.

I have everything. Including leukemia.

As soon as I get rid of this cancer, things can be normal again. Denial. It‘s such a beautiful thing until that thin veil crashes down. But left standing in the debris is a boy who brings color into this dying girl, who is there at my lowest and teaches me what it really means to live. A boy who urges me to fight a losing battle because my death would tear him apart.

A boy who is not my boyfriend. And a death that will find me anyway. 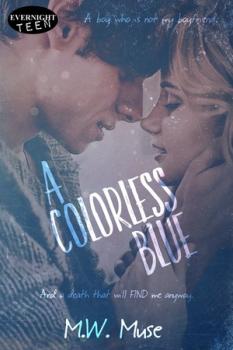 I blinked aside my tears and saw green scrubs. When I looked up, blurry brown eyes stared down at me. How had he found me, the guy I’d been thinking about much too often since I’d met him?

And why did his strength surrounding me comfort me? I cried harder now. It was just another confusion I couldn’t process. I had too much other crap to wrap my head around.

Because I hadn’t really tried to do so until today.

Until I woke up, sweating and puking, knowing I’d been in some serious denial before then.

He gently rocked me, stroking my hair and murmuring words I couldn’t hear through the blood rushing in my ears, but still it soothed me. He soothed. Not a lot—I was still freaking out—but the breaths I took began to get deeper, my hysteria dropping to a more manageable level of despair.

And still the one person who was comforting me in this world was the one I knew the least about.

“I don’t even know your name,” I said through sobs.

“It’s Fallon.” My hair ruffled when he spoke.

Squeezing him tighter, I let go of the final thread of my composure. I only thought I’d accomplished that before while screaming, but apparently, I hadn’t. I cried until my throat was sore, my body completely depleted, but accepting my new lot in life hadn’t come quickly. I’d lost track of time. At some point, I was lifted onto his lap and cushioned against his chest. It was more comfortable than the cold, hard concrete and brick I’d been clinging to before he’d arrived and enveloped me.

Maybe it was easier to sob like this with a stranger than it would’ve been with someone I knew better, but the thought of holding on to anyone else but this guy didn’t feel right. For whatever reason, I needed him, this boy I barely knew. He hadn’t tried to stop me—rather he’d just been here, a shoulder for me to cry on.

I was completely and totally exhausted by the time my crying turned into soft whimpers, my grip on his arms waning. When my tears finally dried, my eyelids were too heavy for me to keep open, so I didn’t. I snuggled into him, my hitching breaths slowing as sleep consumed me.

I jostled awake briefly when I was lifted, but I was too tired to actually open my eyes. The air turned cold once again as the sun disappeared and florescent lights illuminated from outside my closed lids. I should be embarrassed that he was carrying me inside.

Carrying me at all.

But I was too tired to worry about that right now. I was sure humiliation would come later, and over more than the current happenings.

I heard the elevator ding, and we turned as he dipped slightly, probably bending to press the button to my floor.

Or to my doctor’s floor. I wasn’t sure where he was taking me. The way I’d been just moments ago, I wouldn’t be surprised if he was taking me to the psych ward. Surely, this hospital had one.

He lifted me a little higher, his lips brushing against my ear.

“I know you’re on the third floor, but what room?”

So, my room then. “Three twelve,” I muttered into his chest. He squeezed me a little tighter. I felt it was his approval of me for responding.

When the elevator signaled our arrival, he moved again. My room wasn’t far from the elevator, so it didn’t take long for him to reach it. After he pushed in, the stench of my morning reached me and I groaned, digging my nose into his scrubs, trying to ward off the smell.

He moved suddenly. A sound of something scraping and me tilting slightly forced me to open my eyes. We were out of the room before I saw what had caused that noise. The chair that had been inside my room by the door. It was now outside of the room with me.

He put me down onto the padded seat and reached for something on his belt. His other hand, though? That was stroking my hair as his eyes bored into mine. He pulled free a phone and punched something in it before bringing it to his ear, not taking his gaze off me.

“I have a code brown in three twelve. Can you send up janitorial to sanitize? Thanks.” After several seconds, he cursed and said, “Yeah, I can check it out. Give me a few.” He pocketed his phone and squatted in front of me, putting his hands on my knees to balance himself. It made my heart race now for a completely different reason than before. “Who’s your doctor?”

“Eichmann,” I whispered without hesitation.

He nodded. “I have to go, but I’ll have his nurse paged.” He hesitated, then added, “I’ll be in the cafeteria after I get off. If you feel up to it, you should come down. We can talk. Around six.”

I didn’t say anything, just stared back at him.

When he stood, I immediately missed his touch. “Get some rest, Blue.”

I watched as the man in green walked away. But I didn’t have to think of him like that anymore.

The meanie turned savior had a name, a name that I could now use when my thoughts drifted toward him.

He was Fallon, and he had saved me. Found me drowning in my tears and protected me while I learned to swim again. I was sure that it wasn’t the last time I would cry about this. I’d been in denial for so long that I had a lot of accepting to do. Maybe next time, I wouldn’t completely lose it when I crumbled. Because I would. Again.

Yes, he’d saved me today, if only for a little while.