A Dark and Stormy Promise

The house Ellen and Gary bought in the country seems to radiate a curious and sexually arousing energy. Being in the house re-energizes their marriage and then some.

Ellen invites friends to come from the city for a weekend of sex. A huge thunderstorm blows in, making travel impossible and the friends cancel.

A couple arrives at their door, stranded by the storm. Ellen and Gary invite them in and finds out the couple once owned the house.

Ellen and Gary fall under their spell and Ellen is swept into the powerful currents of her wildest sexual fantasies. 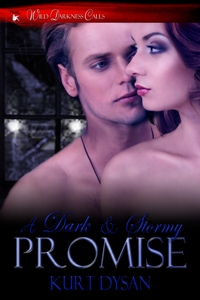 A Dark and Stormy Promise

“Sorry to disturb you,” the woman said. “Our car went off the road about a mile down the road. It’s pretty messed up.”

“Holy shit!” Gary opened the door wider. “Come in. Are you all right?”

“Our bodies are fine,” the man said. “My ego is shattered. I’m feeling damn stupid for driving in such foul weather. The road is like ice. I lost it on the big turn.”

“I know that ditch.” Gary shut the door once the couple stood inside. “It’s pretty steep. You are fucking lucky.”

Ellen grabbed her cell phone. “Do you have a tow service?”

The man laughed. “I’m afraid it will take more than that to get the car back up.”

Ellen liked his casual laugh and the way he didn’t blame someone else for fucking up. He was a big man but in good shape. There was nothing special about his face, but she found him rather attractive. The woman was thin and dark and nearly as tall as Gary. She wasn’t pretty, but had a definite sexy look. If Ellen cared to guess, she’d say they were in their late thirties—a few years older than she and Gary.

“I better call the police,” she said. “If they see the car, they’ll start searching for you.”

“Good idea,” the woman said. “We don’t want them sending a search party out in this shit for no reason. Our phones aren’t working.”

Ellen flicked her phone open and saw that she had no service. “Damn. Just when you need it, there isn’t any service.”

Gary pulled his from his pocket. “Me either.”

“Before we crashed, the radio was talking about mud slides in the area,” the man said. “Maybe it took out the cell tower.”

“I have no idea how that stuff works.” Gary slipped his phone back in his pocket. “Maybe so.”

Ellen stepped over to them and smiled welcomingly, accepting that her plans for the weekend had taken a new turn. “Well it looks as if you will be our guests tonight,” she said.

The woman appeared embarrassed, but pleased. An odd sensation ran through Ellen as the woman looked her over. It was the kind of look she got from men—men who wanted her.

“You are incredibly kind,” the woman said. “I’m so sorry for intruding on you.”

“It isn’t like you had much choice. We can’t send you back out in this. Now we need to get you dry. I’ll get some towels.”

“Can I come with you?” the woman asked. “I’d like to get out of these in the bathroom and start them drying.”

“Ellen and Gary,” Ellen told her. “Welcome to our home.” Tina gave her a strange smile. “I was wondering what you were doing out on this road. There are just a few homes out here and nothing else. Did you get lost?”

“No. We were coming back from a party at a friend’s house.” Tina looked around. “It’s so odd.”

“Seeing it this way.” Tina grinned. “The fact is we used to live here.”

“That was over two years ago.”

Tina gave her a thin smile. “Sometimes you don’t have a choice.”