A Death That Lingers

A wife leaves her abusive husband, but soon realizes nothing will keep him away. Not even death.

Josie Collins is the wife of a world famous rock star and the envy of nearly every woman in the country. But the horrific truth is her husband wants nothing more than to see her dead.

Josie finally summons the courage to leave her famous, abusive husband and returns to her hometown among the winter wheat of Kansas. When her husband is killed in a fiery car accident while on his way to find her, she thinks she has escaped him at last, but she's wrong. It quickly becomes clear that even in death he has no intention of letting her go.

As Josie develops a rapport with sexy police chief, Paul Stark, trouble begins to brew. There's something special about the tall, mysterious officer with the long jagged scar down his face. But Josie soon learns that he's haunted by a nightmarish past.

Sparks fly in their small, Midwestern town, and as their attraction grows, so does a dead husband's fury. In order to smother this dark, sinister spirit, and perhaps find true and lasting happiness with each other, the living must learn to let go, give in, and leave their ghosts in the past. 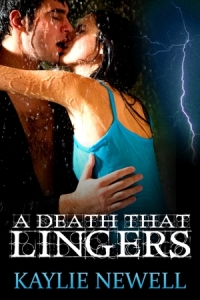 A Death That Lingers

"This debut release by Kaylie Newell will linger in your mind long after you read the last page." Lisa at A Tasty Read

"...I truly enjoyed this book and look forward to reading more from this wonderful, talented author. If you're a fan of realistic contemporary with characters who have flaws and quirks that make them real, then you have to give this book a try." Sage at Long and Short Reviews

Josie jammed an accusatory finger in Paul's direction, the robe coming loose at her shoulder and gaping at the neck. "You're afraid."

He raised his dark brows, his lips set in a solid line.

She tossed her head and smiled bitterly. "You're afraid of anyone depending on you."

She jerked away. "Don't touch me. And don't tell me to calm down. I think I've earned the right to be a little upset, don't you? I mean, we sleep together and then you move on, is that it?"

"You know what you are?"

"Oh, I won't regret anything I'm saying. The only thing I regret is letting myself fall so hard for you."

He flinched as if she'd slapped him, but she didn't care. It was all coming so fast, she wouldn't have been able to stop it if she'd tried.

He was getting mad now. Color crept up his neck and into his face. His scar showed white hot against the prickly black stubble on his cheek.

"You didn't kill Samantha," Josie continued undaunted. "Someone else did. But you're going to pay for it the rest of your life. I'm willing to bet that every time someone tries to get close to you, you back away. I'm not the first, and I sure as hell won't be the last. You're afraid to feel anything. Afraid to form any kind of meaningful relationship."

"You don't know me." His voice was a low rumble.

His gaze was so intense that she took a step back and stumbled over her sandals where she'd left them on the floor.

She backed up against the bed, lost her footing, and plopped down unceremoniously. Her robe slid off one shoulder and she snatched it back with both hands.

His heated eyes shot down to her bare skin before coming back to her face again. They practically smoked with fury. "You don't think I can feel for another woman again, is that it? You don't think I feel anything for you?"

Josie scooted backward on the bed as he approached like a tiger. Her throat ached with angry tears.

"I said get out." She came to the other side and stood up, trying to rearrange the slippery robe which was barely covering her hind end.

His eyes raked over her, but it was impossible to tell what he was thinking. "What exactly is it that you want from me?"

Raising her chin defiantly, she locked her knees in place, refusing to answer.

He stalked around the bed, the veins in his neck bulging. "Is this what you want?" He reached down to the bottom of his t-shirt and pulled it over his head in one ferocious swipe.

She stood there panting with fury, trying her hardest not to stare at his naked torso in front of her.

The long hard muscles of his arms and shoulders strained against smooth, olive skin. His pectorals twitched as he balled up the shirt and threw it on the bed.

Her eyes lowered to the line of crisp dark hair that ran down the firm ridges of his abdomen, to disappear below his worn leather belt. She tore her gaze away, blushing.

He stepped closer. "Is this what you want? Because this is the only thing I'm capable of right now."

She held her ground. She'd be damned if she was going to let him bully her. If she could just keep her eyes from falling to his waist. And below…

"I couldn't care less what you're capable of. I told you to leave—"

He reached out, grabbed her by the wrist, and pulled her to him. His heat engulfed her. She struggled against his body, but it was like trying to wriggle against a brick wall.

"Get your hands off me! Let me go this minute or I'll—I'll…"

His eyes burned, his pupils huge dark orbs which swallowed her whole. His chest rubbed against the flimsy robe and her stomach tightened instantly. "You'll what? You'll call the police?"

Arrogant bastard. She lifted her other hand to slap him, but he caught it in a flash.

Gritting her teeth, she glared at him. He pressed against her and leaned closer so she could smell the soap and musk on his skin. Her back arched, as if reacting on its own.

"I would never hurt you…you know that," he said, his voice low, his fury giving way to something else altogether.