A Fork In The Road

Phil's girlfriend Mary was a successful fantasy writer, but then she got sucked into one of her own stories. Now Phil has to contend with the police who think he is responsible for her disappearance, and with the problem of getting her back ... 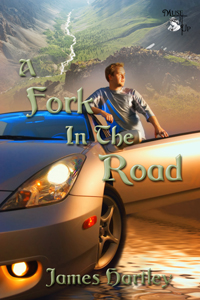 A Fork In The Road

"Carole told me you sold another story," I said. "Congratulations."

"Yeah, to one of the most prestigious fantasy magazines in the country. I'll get you a copy so you can read it." I guess I didn’t answer quickly enough, because she looked at me and said, "You do read the stories I give you, don't you, Phil?"

I mentally crossed my fingers as I answered. "Most of them, at least the shorter ones." In truth there had been quite a few I couldn't make it all the way through. "It's just…well, I wish they could be something other than fairytales. Not even fairytales for kids, I know kids like fairytales, but you write fairytales for adults. Mary, you're a very good writer, you could end up on the bestseller lists, if only you'd write something real!"

Mary shook her head. "Real? What's so special about 'real'? Didn't you ever read any fantasy when you were a kid? The Wizard of Oz, Lord of the Rings, that sort of stuff? Or even comic books? I just about lived those stories when I was a kid."

"No, I never read any of those," I replied. "I saw the Oz movie on TV, but it never turned me on, it was so outrageous. Talking scarecrows and tin men! Sheer nonsense. That sort of thing could never happen. What do you mean, you 'lived those stories'?"

"Oh, I was a terrible daydreamer when I was a kid. I guess I still am, many writers are. But most of the girls in my class at school wanted to grow up to be a ballerina, or a movie star, or the first woman president. I dreamed about growing up to be a sorceress, or a princess, or a super heroine. Or even that I was some kind of changeling and would eventually discover I was really a fairy or an elf. You really never had those kinds of daydreams?"

She shook her head again. "Poor deprived Phil. You just don't know what you're missing. But let's drop it for now. Today is too nice a day to argue about this."
I nodded agreement. I also told myself silently I had to make another try, a really serious try, to read all the way through some of Mary's stories.