A Glimpse Beyond the Veil

We've all known those people who seemed a little strange, a little weird. Your third-grade teacher. The old man down the street. People you were sure just couldn't have been human.

A believer in the potentials of the unknown, Dr. Kyle Perrin – fringe anthropologist, traveler, and theorist – never expected to be given the opportunity to explore that unknown directly. But when a detective asks for his advice regarding a mysterious pair of coins found in the eyes of a weeks-dead corpse, he becomes hurled into a waking nightmare, guided by a stoic former Army ranger and an enigmatic benefactor. What begins as a grisly investigation becomes personal once Gina, Dr. Perrin's street-walking lover, gets entangled in the mire, hurtling them all toward a nailbiting showdown. 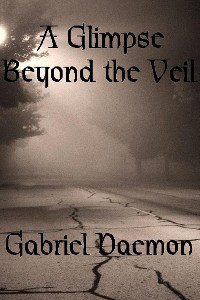 A Glimpse Beyond the Veil

Kyle was just popping the top off a pair of beers when the doorbell rang. Ah, pizza! he thought, leaving the bottles on the counter. He grabbed the twenty-dollar bill he had set aside on the breakfast bar near the door and pulled the portal open. His attention was immediately focused on the large padded bag the man carried, not the man himself who stood on the doorstep. Eagerly, he offered the twenty . . . and stopped.

“Jesus!” exclaimed Kyle, scuffling back quickly. The twenty-dollar bill fell to the floor before the abomination's advance.

With a hollow-sounding emission that was like wind passing through a fissure in a graveyard, the figure marched forward, tossing the pizza bag aside. Kyle stared with a mixture of horror and fascination, wondering if what he saw was real, while at the same time making instant connections with what he had seen in the morgue just days before.

Reacting quickly, Kyle dove out of the way of the monster, reaching for the first weapon of opportunity he could – a standing lamp with a six-foot pole, atop which was an inverted dome that housed the bulb. Tucking the pole beneath his arm, he whirled about and faced the creature, which lumbered clumsily, hands balled into fists at its sides.

A loud gasp sounded from the bedroom doorway, making the monster hesitate and Kyle to glance back. Clad only in a towel, arms and legs glistening from her recent shower, Gina stared in abject shock at the scene before her. “Who the fuck is that?”

Kyle said nothing, deciding instead to take advantage of the walking corpse's apparent confusion. Valiantly, he charged forward, aiming the lamp pole like a makeshift lance. Both the glass bowl and light bulb shattered against the creature's chest, and the pole itself bit into rancid, dry, decayed flesh.

The monster barely staggered on its feet, grumbling. It reached up to the pole, ripping it free and jerking it from Kyle's grip. It lashed out with a powerful punch that sent Kyle stumbling backward, against the back of his couch. Stunned, Kyle touched his nose and pulled back fingers smeared with blood. The metallic aroma filled his senses, mingled with the faint odor of decay.

A glass punch bowl filled with matchbooks collected from dozens of bars and restaurants sailed through the air, crashing against the monster's left shoulder. “Leave him alone!” shrieked Gina, forgetting her towel. It lay on the ground behind her as the naked young woman looked for another impromptu missile.

The monster bellowed again, making them both wince. But Kyle was determined not to go down without a fight. Desperately, he took a step and threw his weight into a single punch, which cracked against hard, dry skin and stony teeth. The monster paused, dead lips twitching. A single tooth fell from its mouth to the floor. It grumbled menacingly.

In response, his attacker raised both pummeling fists and bellowed once more.