Nick works as a re-enactor at a Colonial America site. One foggy night he meets David Henry, just about the sexiest man in colonial garb Nick has ever seen. Because Nick's missed the last bus into town, David invites him to stay the night with him at the colony's inn.

Though there's definitely a spark between them, David is gone when Nick wakes. When David's claim of working as an apprentice at the glass shop doesn't pan out, Nick begins to wonder about the guy he's met and the ghost stories circulating around the colony, stories he always believed untrue ...

NOTE: This story originally appeared in the anthology "Cupid's Arrow" published by Aspen Mountain Press in 2007. It has been newly edited and the republished version more in line with my vision for the story as I originally wrote it. 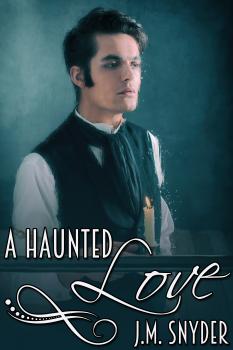 Bitten by Books: 4 out of 5.
"I was riveted by every story ... [A Haunted Love] is absolutely my favorite J.M. Snyder story to date."

Bitten by Books: 4 out of 5.
"A very enjoyable story that raises some interesting questions and leaves the reader wanting more."

Fallen Angel Reviews: 5 out of 5.
"A different kind of a ghost story that tangles the two main characters up in an impossible relationship ... The two are sweet together, searching for each other by day and coming together by night, both equally confused by the situation they are in but wanting very much to be together ... Overall this is a sweet story and well worth the read for those who love a ghost story."

Joyfully Reviewed:
"It was a happy ending but not a very telling ending ... as a JM Snyder fan, I am glad that I read it."

Literary Nymphs Reviews: 4 out of 5.
"The creative J.M. Snyder lures you into the minds of Nick and David, two lonely gay men from different times finding a loving connection, but is it real or fantasy? Step into the intriguing world of A Haunted Love and draw your own conclusion."

Rainbow Reviews: 5 out of 5.
"A fascinating story [with] a paranormal flair that adds depth and mystery to the plot line ... Nicholas wanted someone of his own so much that he was able to find a love that may not exist today, but will he choose his love or will they remain just figments of each other’s imagination?"

I unlace my shirt further, pull it open a bit, and recline in the chair with my eyes closed. I hope he’s watching me. My fingers trail down my chest, my stomach, over my crotch, until my hand rests on my thigh. I ease open my eyes and look over at him.

He stares baldly at me, as I hoped he would, and there’s a naked hunger in his eyes I put there, me.

Damn but he’s pretty, have I mentioned that yet? By the firelight his skin glows, his hair darker than it looked outside, his eyes like sapphires, faceted and sparkling. He sinks into the other chair slowly, not taking his steady gaze from me. If he knew I saw him looking he’d blush because I can almost taste how bad he wants to touch me.

“Can what?” His voice is deep and throaty as if he just woke up.

His hand stretches out before he can stop it, and his fingers brush across my knee, then pull back. Suddenly he clears his throat and stares into the fire as if we’ve done something wrong and he can’t bear to look at me any longer. “You can have the bed,” he says, his voice strained. “I’ll stretch out on the floor. It’s only one night.”

“You can sleep with me.” I keep my voice soft because I don’t want to scare him away. When his cheeks redden, I add, “I’m not talking about that. I don’t fuck guys I just met.”

He doesn’t answer. Instead he stares at the fire and toys with the loose sleeve of his shirt. In the low light, his hair matches the color of the flames, and a muscle pulses in his jaw where he’s clenched his teeth to keep silent.

I nudge his foot with mine playfully. “David, it’s a full. That means two people fit on it. All we’ll do is sleep.”

“I don’t know.” He glances at me and there’s that muscle again, throbbing as he takes in my lips, my eyes, my curls. It’s as if he’s undressing me in his mind, and I hope he likes what he sees.

I tug at the laces on my breeches that tie up my crotch and sigh. “You said it yourself,” I point out. “It’s only one night.”

His blush deepens. “I’m not the sort of man who does something like that.”

I study him. I can’t be wrong—I’m never wrong, I can spot boys like him a mile away, boys who like other boys, boys like me. I can pick them out of a crowd. I see the interest shine in his eyes…he wants me. Even if he doesn’t know it yet, there’s something about me that will haunt him until we meet again.

I already know I’m going to get his number first thing in the morning, and I’m going to ask him out, maybe take him to the movies. I’ve waited a long time to meet someone like him and I’m not going to let him slip away so easily. “Something like what?”

“You don’t like guys?” His lips twist as he tries not to smile. He still isn’t seeing things my way. I want him to see me. Reaching across the table between us, I touch his arm. “Come on, David. I see the way you look at me. You’re the sexiest boy I’ve seen in all the time I’ve been here. I’m thinking we need to hook up, you and me, and I know it’s not going to be tonight but I can wait. Shit, you look like the type who’s worth waiting for, you know?”

He smiles and runs his forefinger across my knuckles, his touch light and feathery. “You aren’t from around here, are you?”

Now he’s snickering and his hand is on mine, he’s holding it to his arm as his fingers ease into my palm. I don’t think he knows he’s doing it.

“You use a lot of funny words, and you talk so fast. I don’t know half of what you mean but I like the way you say it.”

“I’m saying we can both sleep in the bed.” Now that he’s smiling, I can’t keep from grinning myself. “No fooling around, I promise. I like you, David. I’d be lying if I said I didn’t, and I’m hoping we can get to know each other better. You work at the glasshouse?”

He nods. That’s not far from where Jeremy works at the smithy. “Shit,” I drawl, closing my fingers around his. “I’ve been wanting to meet a boy like you for a long time now.”

“Why?” The way he looks up at me, not quite so shy anymore, suggests he knows exactly what I have in mind.

A Spooky Delight
Jessie Colter
In Shelf
$0.00
Tweets by
sirenbookstrand