A Hitch in Time (MM)

Shane’s parents drop him off at the train station with money and instructions to take the train to his Aunt Sophie’s place for the holidays. The minute they drive off, he walks out again, leans against a pole, and throws out his thumb.

Having just turned eighteen, he is, as he regularly reminds himself, now a fully legal adult and quite capable of having his own adventure.

In the few days and nights it takes him to hitchhike all the way, he gets to know some very interesting people. Hippies, conmen, an ex-teacher ... and also the dog Jimmy. He learns there are more to people than meets the eye, and the world is rather bigger than his cosseted upbringing led him to believe.

By the time he arrives at Aunt Sophie’s place, he has lost his virginity, acquired a dog and a cousin, and has the pleasing probability of a sweet summer romance to look forward to. 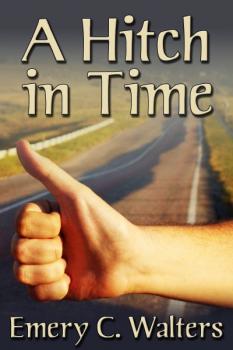 A Hitch in Time (MM)

And so I’m outside again, leaning against a pole, thinking, hmm, pole ... dancing. No. No more excitement, dull would be good. Although it’s supposed to be an adventure, right? And here comes my next ride. It’s a man and a dog. I see the dog first; he’s all white except for a black ring around one eye like he’s been cold-cocked (oh crap, how about a better term than that?) K O-ed. Punched. I can’t help thinking it’s the ugliest dog I have ever seen. Nonetheless, I climb in, shoving the dog over to make room. Gently of course, seeing the size of it. Him, yeah, definitely a him. He starts licking me.

Well back to normal. We ‘burn rubber’. Jimmy was now in my lap, licking my face. This thing weighed a ton. Maybe a ton and a half. He couldn’t sit still. His head was shaped like an egg. I don’t think I’d ever seen a happier dog, though.

“I just sold my white van to a buncha hippies.” He stared at me again. “They want it painted so I’m gonna meet up with them and detail it for them. Heh heh, I got some ideas for it.” He chuckled wickedly.

“You wanna beer?” he asked suddenly. Yes, yes I did wanna beer, dammit, so I took one and watched sideways as he opened his bottle with his teeth, or, tooth. I said, “Is your dog a boxer too?” I glugged beer. I’d meant to sip but the dog’s butt knocked the bottle into my mouth and it was swallow or die, well, glug or die. The dog farted.

“Hell no, he’s 90% bull terrier and 10% little black dog down the street. That’s a joke, son. The other part is pure bulldog, that’s why he’s got those fat jowls, don’t you sweetie pie? Who’s a good little doggy then?”

‘Little’? Where did that part come in? Jimmy farted again. I drank. Whip whip whop went the long white tail. Appropriately, the radio blared out, ''And now for 'Bungle in the Jungle!’'' and the driver cranked it up. “I love this song!” he shouted, banging his fist on the dashboard.

After an endless monologue, which I had tuned out, enjoying my first (as far as I knew) beer, and the music (who was Elton John? Gloria Gaynor? They seemed cool) when my driver snarled, “Shee-it.” Two syllables. “Look here, son, do me a favor. My name is ‘Frank’, got it? And that’s your dog now, not mine, nope. He’s uh, twelve years old, right? Actually he’s almost not quite a year, a puppy still, but he likes you and my real name is Chuck but you don’t know that.” He glared at me. Uh oh.