More From The Hunters

That has been his life.

Early on, he used to dream, he used to hope but that hope has long gone. The temptation to walk into the sun is with him constantly.

“Do you know?” he spoke to the air about him. “I stay out longer and longer each day. The pain from the sun on my body is all that reminds me that I am still alive. Each time I rise I wonder if it will be the day I finally take one risk too many.”

So he fights against those risks.

To stay that extra minute too long in the sun.

To drop his guard intentionally when he fights the strigoi.

At the moment he still constantly wages war with the strigoi but at the same time he also constantly wages it within himself. No one should have to live this long alone. He is afraid that if he were ever to meet his One, he could never return the love given. All his emotions are lost so deeply within that he doubts they even exist anymore. In fact, he has reached a point where he doesn’t think it would be fair to her or him—to love someone who could not love in return.

So now he thinks maybe it’s better to end it all now.

What chance does he have?

Yet once again he rises.

Once again he hunts.

Once again he battles within his heart and soul. Each day passes, each one the same—as the millennia flow past him.

And each time he wakes he wonders who will win this day, this month, this year, this century?

He wonders aloud, “How much longer can I do this?

“You look even more beautiful, Avril, a Hunter’s life suits you.”

“Thank you. It’s good to see you again, Martin.”

She led him to a comfortable chair on the balcony overlooking the distant mountains. She and Viorel were living in their house in Piteşti, Romania. Viorel walked in. Martin stood and greeted him.

Martin sat back down on the chair. Viorel sat nearby, pulling a smiling Avril onto his lap and kissing her cheek.

“How were your parents?”

“They’re both good.” Martin shook his head wryly. “My mother is talking about having another child and my Dad thinks she is crazy but in the end she’ll win.”

“Knowing your mother I’d have to agree. Did you visit your relations as well?”

“Yeah I spent a week with my great uncle, at least that’s what I call him.”

Martin grinned to himself when he thought about the old man. He was a descendant of Martin’s father’s brother. He was in his late eighties and complained he was getting older. He would call Martin by his true name, Omasekew, which meant “a fighter” in Cree. The old man would make Martin do things for him, telling the others that Martin had young feet while his were so ancient. Martin loved it.

The old man knew the truth and the pair laughed together when they were alone. To Martin “Uncle” was a baby. Only a few members of the tribe knew what Martin really was. Many thought he was a piyêsiw, a “thunderbird,” sent to watch over them. It made sense as he would often arrive as a bird and had destroyed a strigoi that had been preying on the people using a lightning bolt. They believed his father had married a piyêsiw-iskwêw, “thunderbird woman,” and that was how Martin came to be.

It saddened him to leave knowing the old one would not live for many more years.

“That’s the worst part of being a Hunter, losing so many friends and relations over the eons,” Viorel said sadly. “And it just doesn’t get any easier with the passing years either.”

The two men sat thoughtfully, both lost in thoughts of family and friends long gone. Avril wondered how she would cope when her mother passed. She didn’t have any other family alive and her mother meant the world to her.

They were all silent for a while, relaxing in the early evening twilight. The sun had set over the distant Ciucaş Mountains. Viorel broke their reverie.

“That strigoi in Smokey Hills was rather active wasn’t it?”

“I’ll say. At first, I thought there were two of them. It was only after I destroyed it and waited a week to see if there were any more deaths that I realised there was only the one.”

Avril got up to make tea leaving the two men to talk together.

Anthan could feel someone watching him. He carefully looked through slitted eyes. Erica was standing in the doorway. His heart leapt. He saw her bite her bottom lip. He opened his eyes fully to look at her.

He reached out a hand to her and she started. Giving him a silly grin, she came to the bed and took his outstretched hand.

Anthan pulled her down to him and kissed her lips softly. She fell into his arms and returned the kiss. He sucked on her bottom lip then pushed his tongue between her teeth. Her breathing increased, his was already racing. So this was what it felt like to be in love!

It felt like fireworks were exploding in his head. His stomach was tied in knots and his heart was almost leaping out of his chest.

She broke the kiss and looked down at him. He marvelled at her beauty as her long thick hair fell forward to cascade like a waterfall across his shoulders and chest.

“My Iubită, I still can’t believe it.”

He ran his hands up and down her arms, feeling her shiver of pleasure. She touched his face with the fingers of one hand, tracing his eyebrow and then moving down to his lips. Her finger ran across his top lip softly, his lips parted as she continued across the bottom one.

He caught it gently with his teeth. Her breath caught. He wrapped his hand around the finger and sucked it into his mouth. All the while, her eyes never left his.

She moaned lightly. He kissed the finger and she ran it across her own lips. He groaned.

She sat back on her heels. As he watched, she slowly unbuttoned her blouse and cast it aside. It was his turn to catch his breath. Her lovely full breasts were encased in filmy lace. He could see the dark outline of her areola and her nipples pressed hard against the fabric.

He stretched out his hand to run it across the lacy edge. She closed her eyes for a moment as he cupped one in his hand, brushing his thumb across the peaked nub.

He could feel his erection pressing against the bedclothes. He wasn’t sure what to do.

Should he tell her he was the oldest virgin on the planet or should he hope that he instinctively did the right things?

What if he did something wrong and disappointed her?

She opened her eyes and looked into his. Nervously she stretched her hands behind her back and unclasped her brassiere. Brazenly she pushed the straps off her shoulders and it fell forward. Those magnificent breasts fell free.

They were amazing, full and plump and ripe. He reached out to run his hand across them. The nipples pebbled even harder. He marvelled. Her breasts were so soft but the nipples so hard. He wanted to taste them. He sat up and leant forward to breathe in her fragrance. He ran a line of kisses down her throat until he reached the swell.

Carefully he took one pebbled point into his mouth. He rolled it around his tongue then he sucked it. He was rewarded by Erica’s moan. With his hand, he began to massage the other breast, playing with its peak. Erica’s hand moved to his head and held him tightly against her breasts. He continued to lave the nipple in his mouth with his tongue. All the while his cock felt harder and harder, till it hurt.

Erica dropped her hand from his head and Anthan stopped sucking. He sat back a little and looked at her. Her face was flushed and she was panting slightly.

“Anthan.” Breathlessly she spoke, her face blushed. “I… um…I’ve never been with anyone. I’m not sure...” she stammered nervously.

Anthan couldn’t stop the silly grin on his face. She looked worried. He leant forward and kissed her then took a breath.

Her eyes widened as she took in what he said.

“We can learn together.” 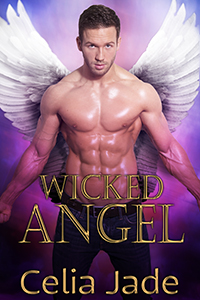