More From The Hunters

For a moment, Charlotte wondered what was happening, then she remembered the events of the night before, but foremost in her mind was the fact that he had forced her to sleep. She jumped to her feet, furiously grabbing the quilt to cover her nakedness.

“Never! And I mean never! Never force me to do something again. Do you understand?”

Charlotte was irate, her voice low but filled with fury.

“No, none of this Cara business, I mean it, Matei. If there is a chance that we will stay together…” Matei went to interrupt her but she held up her hand. “If we are going to stay together, I have to know whatever I do is of my own volition. I don't want to wonder whether you are directing my thoughts. You do that one more time and I don’t care if I ruin the rest of my life, I will walk away from you and not look back.”

She glared at him. “Get it, Hotshot?”

Matei had the good grace to look chastened. He nodded his head, not risking speaking. Charlotte’s eyes were flashing, her whole body was filled with anger, such charged emotion, and he was excited by it. In his mind, she was wonderful, standing up to him as if he were a mere child instead of a powerful immortal. She had no idea the power he had at his fingertips and even if she did, he thought she would still berate him.

He held out one hand, waiting for her to take it. He would not bend to her or take her hand, he needed to know that she would come to him.

No words were spoken as he waited. She searched his face and then he felt her enter his mind. She could see how he felt. He was sorry that he had caused her distress, sorry that he had forced his will on her, but upmost was the fact that she excited him and he was aroused by her.

He watched as she released her anger. He sat patiently, hand outstretched, for her to make that first move. She spoke quietly, trying to make him realize just how serious she was.

“Understand, Matei, I need this. I need to know everything I do is because I choose to. I'm  sure you would prefer that what I do is because I want to also. Promise me you'll  never compel me to do something.”

“Charlotte, I cannot promise that”—she drew a ragged gasp—“but what I will promise you is I will not compel you to do anything unless your safety is at risk.”

Looking into his eyes, she realized that was a great compromise for him. Thinking it through, she understood his caveat.

“Okay, I think I can live with that but later we may have to define what a safety risk is.” She reached out and took his hand.

As he pulled her to his chest and kissed her deeply, the quilt fell by the wayside.

Several minutes later Charlotte sleepily murmured into his chest, “What time is it?”

“It has just struck the hour of seven, I must leave you before the sun rises much further. I need to sleep.”

“Charlotte, we need to speak more. I need to answer all the questions that are in your mind, Cara, but it will have to be tonight.”

Charlotte looked at him. She was feeling overwhelmed by the feelings he generated in her and thought some time without him would give her a chance to think things through.

Reluctantly she sat up as he moved from her side. He kissed her gently then stood alongside the bed.

“Do not be afraid, we have the ability to disappear at will. May I return tonight?”

With those words, Matei disappeared. Charlotte’s eyes were wide with wonder. Now that was a neat trick, she thought.

Running her fingers the length of his shaft, she could feel the strength as it hardened completely. Charlotte decided if she was going to do this she may as well enjoy herself and do exactly what she wanted.

“Charlotte do you feel okay? I don't  want to make love to you if you are still tired.”

Instead of replying, she lifted up onto her side and eyed the glorious body in front of her. She felt Matei start to move to hold her so she looked at his face and shook her fingers at him. “Ah ah, my turn.”

He gave that cheeky grin with one raised eyebrow and Charlotte felt her stomach drop. Amazing how that little quirk was fast becoming something she adored.

So back to the inspection.

Running one hand across his pelvis and around his groin, she felt the muscles tense so she decided that a lick across the bows, so to speak, would be good. Leaning forward, she ran her tongue across his navel then down the line of hair that led downward, stopping just before his turgid dick.

Then bypassing it, she licked her way to the top of his thigh. Deciding to get comfortable and to be able to look at his face, Charlotte maneuvered herself so she was between his legs. Matei looked as if he wanted to drag her up his body, but she shook her head then leant forward to continue her tongue’s journey.

Now that she was in a better position to tease and explore, Charlotte place one hand on one leg and licked alongside his knee, then moving in sweeping circles upward she journeyed to the top of his inner thigh. She could feel his muscles tense as she got closer and closer to her goal. Her tongue briefly skimmed his testicles and she heard a quick gasp.

Smiling to herself, she looked at her prize. The head was standing proudly before her and a tiny pearl drop was running down the side of the shaft. She leaned forward and licked it off, Matei’s groans more audible.

Matei grabbed her hair with one hand, so she continued to lick across and then once more across his testicles and onto the swollen cock again. She ran her hand up his leg and felt the weight of his balls, caressing and gently squeezing them. Using her elbows to take her weight, she used the other hand to pull back the skin on the head and run her tongue across it.

Ever so slowly, she took him into her hot mouth, her tongue swirling across the tip and into the eye. Charlotte could taste the sweet salty taste of him as she began to slide his cock deeper into her mouth, all the while caressing his balls.

Knowing she could never fit the whole of his shaft in her mouth and throat, Charlotte decided to use her teeth and tongue to heighten his pleasure as she took his penis in and out of her mouth. Judging by the way Matei was moaning and tightening his grip on her hair, she knew he was enjoying the experience as much as she was. She stopped to look at his face.

“Merge with me,” he groaned in her head.

As she did, she drew a gasp, she could feel the sensations that Matei was feeling and it heightened her arousal.

She could feel her mouth on his penis as if she were him but at the same time she could still feel her own pleasure. She gave a few experimental licks. Not only could she feel what it was like to taste him, she could tell what it felt like to him to have her tongue running the length of his shaft. How it made him squirm with desire and arousal. How it made him want to roll her over and fuck her.

She rolled his testicles in one hand. She felt his increased pleasure at the way the balls moved with the pressure of her fingers.

Her whole perception of foreplay changed in that instance.

Now she had the perfect weapon and with a wicked grin at him, she lowered her head once more and took him into her mouth. Using her teeth she drew back the foreskin and licked, then slid the shaft into her mouth as far as she could before withdrawing back to the tip. Between her legs, she could feel herself getting wetter and wetter as she felt both his sensations and her own pleasure at sucking on his cock.

As she withdrew his penis, she sucked hard and let him feel her teeth running up the outside of the shaft, her tongue licking the eye and with her hand holding the base. Overwhelming sensations greeted her and she heard herself moan in the back of her throat in time with Matei. 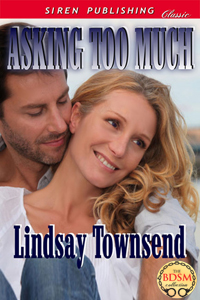 Asking Too Much (MF)
Lindsay Townsend
In Shelf
$2.99 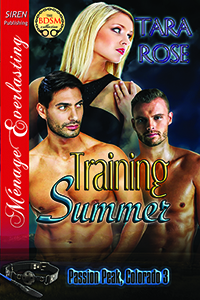 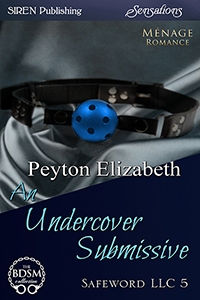