A Jaguar for Christmas

Jackson is a photographer looking for a big cat model for his new calendar. Instead of a wild animal he gets Peter, a shifter with no Christmas plans and all the time in the world to give him.

This short story has been previously published and was expanded.

A Jaguar for Christmas

Jackson heard the front door of his apartment open but ignored it as he finished getting ready. His client was early, which he liked, but not so much when he'd been running late. He threw a light t-shirt on over his loose jeans. He'd recently dropped some weight, so most of his clothes were baggy, but these were especially so. His sister complained that he needed to go clothes shopping to stop looking like such a bum.

He might agree, someday, when his clients started to complain about his fashion sense or lack thereof. After all, he was a photographer. He was supposed to look good most of the time. Or so his nagging sister kept saying. But his clients always seemed more interested in themselves and how good they looked in his photographs than what he was wearing.

He stepped out of his bedroom, eager to get started taking pictures of big cats for his latest project, but stopped as soon as he saw the shirtless blond man currently standing in his kitchen. "Uh. Hi. I thought Tonya would be coming by this morning," Jackson said, shifting his weight on his bare feet.

The guy came around the counter, and Jackson got his second surprise of the morning. Blondie was not only shirtless, he was completely naked. Jackson tried to remain professional as he looked anywhere but at the man's thick length. Not that he didn't want to, of course—he was plenty interested in hot guys as a general rule. But naked strangers in his kitchen at seven in the morning? Not quite. "Mind telling me why you're naked?" he asked in a clipped even tone.

The man blushed and came forward, extending his hand. Jackson shook his hand but took his own back as quickly as he could. "Sorry, Tonya was going to come up with me, but as she was finding a place to park, she started to feel a bit sick. I don't know why they call it morning sickness, since she gets it all the time."

Jackson nodded. He'd known that Tonya, a leading agent from one of the nearby modeling firms, was pregnant. She'd talked about it incessantly the last time he'd been in her office and taken her pregnancy photos. However, that didn't explain who the naked man was. "My appointment today was with a jaguar. So who are you?"

"Peter," he said, stepping back and swinging his arms over his head. "Sorry, stiff muscles. I'll be ready in a minute. And you're out of deli meat. I ate it. Needed the calories. Tonya will cover it for you."

Jackson blinked dumbly at him as questions raced through his mind. "Uh…ready for what?"

Well, that explained something, at least. Instinctively Jackson took a step back. He'd known that some of the agencies were starting to use weres as models. That had been the hot new thing once they'd started coming out a few years ago. He simply hadn't ever thought he'd be working with one of them. "So, you're a…and you can…oh."

He needed to sit down and quickly sank into his overstuffed lounge chair so he wouldn’t fall down.

Jackson pinched his nose and shook his head. "I am a professional. And I can do this," he mumbled.

"Sure you can. Watch this. It'll be easy," Peter replied, taking a few steps back.

Jackson had the clarity to realize that Peter moved like a dancer on the balls of his feet. Suddenly he’d vanished, and in his place stood a large spotted cat. They looked at each other for a long moment before Jackson finally moved again. Even then it was only to sit up a bit straighter in the chair.

"And can you understand me? Right now, I mean?" Jackson asked the jaguar, who nodded and twitched his tail. Well, that settled something at least.

Getting to his feet, Jackson made sure to keep his gaze on the big cat, who appeared to watch him back just as intently as he went to his bookshelf and pulled down his only book on big cats. He propped his shoulder up against the wall as he flipped to the section on jaguars.

After comparing the cat in front of him to the pictures in the book, he decided that the were in front of him would pass as the real cat he needed for this shoot. In fact, he couldn't see any difference between Peter and the picture of the big cat in the book in his hands. And he'd looked pretty closely. Shutting the book and putting it away, he tried to come up with a game plan.

"First, there are rules," Jackson began, coming forward and picking up his camera. "I'm the photographer. Being whiny doesn't really work with me. There are snacks and drinks available if you need them, but we won't be breaking every fifteen minutes. Phones aren't allowed in my studio, and neither are overbearing boyfriends, husbands, sisters, parents, or whoever else you have that would get in my way. I have one goal—to get the best shot possible. Make that happen and you're a gem. Nod if you understand."

The jaguar nodded, and Jackson nodded too, feeling far more in control now that they'd established those guidelines. He checked his camera for a full battery, grabbed an extra fully charged battery just in case this one ran out, and opened the door to what would have been the second bedroom if he hadn't converted the empty space in his condo to accommodate his career.

The jaguar trotted in without him having to say anything and stood in the center of the room, appearing ready to take direction. Jackson shook his head in surprise. No wonder people were starting to employ weres for roles that animals had traditionally been in if they were all that easy to work with. 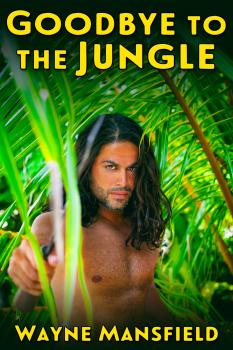 Goodbye to the Jungle (MM)
Wayne Mansfield
In Shelf
$3.99

Tied Up In Tinsel
Lark Westerly
In Shelf
$1.99