British werewolf Roderick Chase has been sent to Philadelphia to get married. Instead he finds himself the target of werecoyote assassins. His only hope: Darinda Lowell, a witch with a low tolerance level for arrogant alpha males. She agrees to act as his bodyguard and use her magic to find out who’s trying to kill him.

There’s no way the pushy wolf and the vegetarian witch can get along, or so Darinda tells herself. However, love tends to work a spell even a witch can’t ignore. Can she claim the wolf who’s won her heart, or will she lose him to a murderer?

"I like comedies. I like murder mysteries. I like paranormals. I like an evenly-matched hero and heroine engaged in snappy dialogue. And I just love me an English accent spoken in a deep sexy voice. I had a blast writing this book. Hope you have as much fun reading it." ~Pat A BookStrand Mainstream Romance 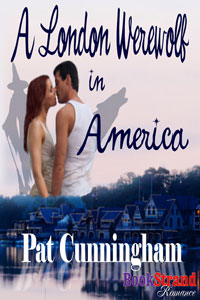 Heat Rating: Sensual
Word Count: 80,488
12 Ratings (4.0)
Contemporary Paranormal Vampires/Werewolves
In Bookshelf
In Cart
In Wish List
Available formats
Mobi
HTML
PDF
ePub
Cover Art by Jinger Heaston
Reviews
I really enjoyed the book, I hope there is a sequel or two, lots of secondary characters to love. plus it would be nice to check in with Darinda and Roderick.
CheriBlue
I absolutely love this book! I have ready many of Ms. Cunningham's books and she truly shines as an author in this one. I fell in love with the writing almost as much as the characters. I only have one regret about A London Werewolf in America, it does not have a sequel! She has so many engaging secondary characters that you just want to know what happens with everyone else!
deematthews
Read more...
Professional Reviews

5 DELIGHTFUL DIVAS: "The narrative and dialogue were witty and humorous. The plot was brilliant and had me turning the pages in record time. I wanted more and wasn’t bored for an instant. Rather, I savored every word. Every player has been brought to life so fully that I became one with the story. There is a mystery woven beautifully throughout that leaves you guessing until the end. Everything was done perfectly in A London Werewolf in America. The resulting romance melted my heart! Run, don’t walk, to pick up your copy of Ms. Cunningham’s newest release." -- Stacey, Dark Diva Reviews

5 TEACUPS, RECOMMENDED READ: "Pat Cunningham is a brilliant author that puts her heart and soul into every sentence. A witch and a werewolf make for a fun, interesting match. Pat Cunningham is hilarious! Her characters came alive for me and had me laughing out loud. This isn’t just a light hearted read. There is a full, rich plot full of suspense, mystery, and don’t forget the sexual tension. A London Werewolf in America was one of the best paranormal romances I’ve read in awhile. It has everything you need, from a great plot and dialogue, to a sizzling romance. Don’t forget the humor! I suggest you don’t waste time in picking up your copy!" --LynnMarie, Happily Ever After Reviews

"I really enjoyed Pat Cunningham’s A London Werewolf in America. The plot was rich with suspense, mystery, envy, betrayal, humor, lust, romance and most of all love. I will admit however, that there were times that I was somewhat annoyed with Roderick’s outlook towards humans. But, as the storyline progressed, Roderick won my heart as he evolved and learned to respect kinds that were different from him, especially with Darinda by his side. Wow! Darinda proved to be a powerful person both inside and out. She was a very likable character with a great sense of humor and witty, quick comebacks. She had a major flair to take on any challenge that came her way – particularly Roderick’s cocky attitude. She proved to be the perfect mate to tame Roderick. This is one story not to be missed." -- Nikita Steele, Joyfully Reviewed

Bloody doubtful. Roderick Chase—never “Roddy,” thank you very much—wrinkled his nose and growled under his breath, first at his Aunt Letitia’s never-ending perkiness, then at his first good whiff of America. Granted, London’s air was no fresh spring bouquet much of the time, but this! Even for an airport, it made his eyes water, and he’d thought himself inured to the stench of monkey. He didn’t even try to muffle his sneeze. “I don’t suppose she lives in the country?” he muttered.

“She lives with her family in Fairmount Park, but she’s getting an apartment soon.”

Aunt Letty fixed a scowl on him. “Don’t you make that face at me. Your mother went to a lot of trouble to arrange this meet.”

“Ah, yes. Always on the lookout for her favorite son’s best interests.”

“Yes,” Aunt Letty said shortly, “she is. New blood’s always good for the pack, and it’s long past time you were properly mated.”

“I’m quite capable of finding my own mate, you know.”

“Oh, we know. Found yourself a dozen in the last six months, I’ve been told. Usually in pubs. Human pubs.”

“I thought you just said new blood’s good for the pack.”

“That depends on the blood, and you know it.” She took his arm to haul him off to baggage claim, weaving them expertly through the mass of ill-smelling humans. “Your mother wants you mated and settled. The sooner the better, I say.”

“And we all jump when the Queen Mum yips.” Which wasn’t so far off the mark, he was forced to bitterly concede. His mother, Bernadette Chase, had ruled the pack with an iron paw since well before the death of his father. No one, not even Roderick, dared raise hackles in front of her. Playing the happy submissive had grown more difficult over the last several years. Rank as this Yank air was, he found it easier to breathe than the close, tension-filled atmosphere of Chase Manor, although he felt it could do with a lot less monkey-whiff.

A fat ape in a straining business suit nearly ran him down in his desperate lumber toward the boarding gate. Roderick didn’t know whether to snarl or shudder. “So what am I supposed to do with this bitch? Submit to the whole arranged mating, or just get a litter on her?”

“You watch your tone, puppy. I’m not afraid to nip you in public.” Aunt Letty flashed a fang to show she meant it. “Coraline comes from a fine old pack. Impeccable pedigree. No human blood in her veins.”

“She sounds delightful. Perhaps we ought to show her at Crufts.”

Aunt Letty reached up and cuffed him on the scruff of the neck. “There’ll be no more of that talk. You’ll marry this girl and there’s the end of it.” She stared about, her nose working as hard as her eyes. “Oh dear, where’s Eugene got to? He should have joined us by now. Ah well, let’s go fetch your bags.”

She snatched his claim ticket out of his hand and trotted toward the carousel. Roderick lagged behind. Inside his expensive, restrictive suit, he was seething. An arranged marriage, in this day and age. With some Yank, no less. Lycaon bite it, who did they think they were dealing with? He was alpha!

But so was his mother, and some alphas were more alpha than others, as his sister Tamra was fond of reminding him. One did not defy one’s pack leader unless one was prepared to face the consequences, possible death being foremost. Which is how he’d come to stand alone in a crowded airport, hemmed in by monkeys and their noxious stench in bloody Philadelphia. Why couldn’t his mother have found him a she in a more civilized country?

This is punishment, he decided. Her way of forcing him to show throat. All right, perhaps he deserved a cuff or two. He liked his romps. He’d never tried to hide the fact. However, he’d been discreet. No lovers sent to hospital, no half-human whelps left behind, no cries of werewolf to come back and haunt the pack. If the girls themselves didn’t object—and none had to date—then where was the harm? Better a human she than some protected daughter of the pack. The monkeys howled just as loudly and enthusiastically as any were. Or perhaps the Queen Mum expected her get to stay celibate? He shuddered and growled at the thought.

Well, Bernadette Chase was back home in England, and Aunt Letty was verbally tearing out the throat of the hapless baggage clerk, and cousin Eugene had yet to return, so there was no one to stop him from visually feasting on the bounty laid out before him.

Say what you would about humans, they bred themselves some fine, attractive shes, even here in the Colonies. Like that one in the flowered scarf, with legs longer than the Amazon. Or the blonde at the ticket counter, who kept flicking glances his way. Or the redhead alone in the seating area, perched on the edge of her plastic chair, who had placed a shallow clay bowl in her lap and was currently starting a fire in it.

Roderick blinked and narrowed his eyes. She wasn’t actually—

Yes, she was actually. The redhead had taken a white stump of candle out of a shapeless knit shoulder bag big enough to hold India. She murmured to the candle, and it burst into flame. With this she lit the scrap of parchment she’d placed in the bowl. A little wisp of purplish smoke spiraled up. She bent low over the bowl. He saw her lips move.

Now monkeys, the Yank breed especially, had been known to do some pretty queer things, but this was new even to Roderick. Intrigued, he ambled over for a closer look.

He crept up behind her on silent hunter’s feet. His keen ears picked up an unfamiliar language, similar to Gaelic but oddly accented. He risked a final, closer step and walked right into the scent of the smoke.

It wasn’t at all the type of odor he associated with burning paper. Tart and sweet at once, it conjured up images of thick, dark forests, a belly full of fresh-killed venison and, inexplicably, the color violet. Suddenly he felt invincible, as if nothing on earth could do him harm.

All this lasted only a second. Then the woman blew a kiss into the fire, murmured, “Be safe,” and snuffed the flame. The smoke billowed up in a final burst, straight up his sensitive nose. He couldn’t stop his sneeze.

The woman gasped and nearly dropped her bowl. She twisted around in her seat. The most striking cobalt eyes he’d ever gazed into widened at him. Her full and perfect lips formed a full and perfect O. Would those eyes darken during love, he wondered? What cries would she make? What cries would he make in response when those long-fingered delicate hands took their wicked liberties with his flesh?

The left side of his mouth quirked upward. “Of course not.” He nodded at the bowl and its smoldering contents. “So why dispose of the evidence?”

“It’s not evidence of anything. It’s a—” She cut herself off. Her eyes got thin. So they could darken. Fascinating. “You’re not airport security.”

“No,” he admitted with a graceful shrug. “Merely a concerned citizen.”

His first concern at this point was how best to bring down this delectable prey. This involuntary trip across the pond had just become infinitely more interesting. 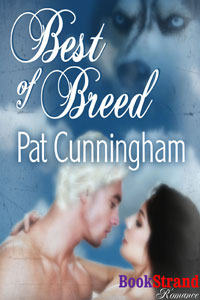 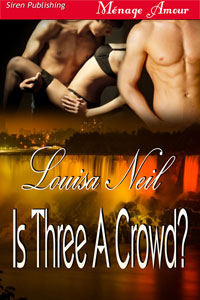 Whispers in the Night (MM)
Gabrielle Evans
In Shelf
$1.99