A Mule for a Princess (MM)

Bobby Estrada is tired of school, rules, and boredom. He wants to have adventures. Eventually he arrives in southwestern New Mexico on foot, tired, and hungry. Orr and Jase, the mule men, give him a job mucking corrals. Six months later he has grown up, learned a lot, and bought a young mule to train. That’s when some exotic visitors show up.

Doyle O’Brien, an Irish aristocrat, is dedicated to caring for his young niece for whom he became guardian after her parents were killed in a tragic accident. She was also injured. Young Fiona loves horses and rode well before she became partially paralyzed. When Doyle hears mules are safe and reliable if properly trained, he decides to try to find a small one Fiona can eventually ride. She immediately falls in love with Powwow, the young mule Bobby has begun to train.

In Doyle, Bobby sees his dream prince come to life. In time the O’Briens must go home, taking Powwow. Bobby is determined to go, too. Can an Irish aristocrat and a young Latino cowboy find common ground beyond the lust that sizzles between them and make a modern fairy tale come true? 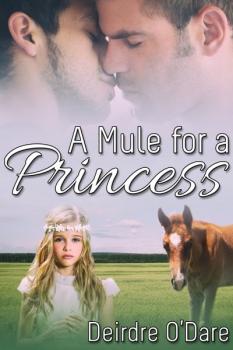 A Mule for a Princess (MM)

The drive back to the ranch took far too little time. They didn’t talk much as Doyle concentrated on the winding road. He drew to a stop by the gate, but left the engine running. Suddenly, he reached across the seat and put a hand on Bobby’s knee. In the dark, his face was not clear, but Bobby felt the force of his gaze as well as that touch.

Doyle’s words came softly. “Yes, I’ve noticed. I also see you’re going to be a good man yourself. I get a sense you’ve done a lot of growing up recently, right?”

Bobby nodded, keenly aware of that hand, warm through his jeans. He wanted to feel it many other places, too, but told himself to be patient. “I’m trying to,” he admitted. “I was kind of a punk for a while and got to where even I didn’t like me too well. That was one reason for the mule stuff. Learning and growing, and I’m glad I chose this way.”

“It’ll be a big change for you, Ireland, I mean. I’ll do what I can to help you adjust, but I’m going to be busy for a while, probably traveling a good deal. I never wanted the O’Brien empire, but it looks like it’s in my hands for now. I have to keep it going for Fiona. Maybe in time I’ll enjoy it more, but for now I’d rather be riding my horses, as carefree as I used to be.”

He exhaled in a slow deep sigh. “It will help a little to have someone like you around. A reminder perhaps.” He drew his hand back and turned his face to the front of the vehicle. “We’ll talk more tomorrow, but I’m glad we discussed this tonight.”

“Me, too, and thanks for dinner. They do put out a good meal up there.”

Then, because it seemed like Doyle was ready to go, Bobby reached for the door. All at once, Doyle grabbed his left arm, hauled him back and halfway around.

As kisses went, it was awkward, almost angry yet powerfully arousing. Doyle’s lips tasted of hot sauce, beer, and man. They ground against Bobby’s, while a questing tongue probed and sought entrance. He could not resist that demand and opened to the other man’s invasion. Omygod, omygod,omygod. His head spun, his heart slammed against his ribs, and he went iron hard at once.

Falling into a whirlpool of sensations, he was not ready when as abruptly as Doyle had grabbed him, the Irishman shoved him away. “Go. Just get out. That was not supposed to happen and I won’t remember it tomorrow. You’d do best not to either.”

This time, Bobby got out. He scrambled and staggered away from the vehicle. Somehow, he made it through the yard gate. Without looking back, he stumbled up the two steps to the porch and on into the house, trying not to make a racket. He knew Orr and Jase went to bed early, and he didn’t feel like answering any questions should he wake them up. As he entered his room and shut the door as quietly as he could, he heard the SUV pull away.

He sank onto the bed without even turning on a light. It was all just too much to take in, to comprehend. Was it possible he might actually go to Ireland -- soon? That was amazing. Then, more amazing still, Doyle had actually kissed him. The most shocking and sensational kiss he’d ever experienced. He touched his mouth with a fingertip. It still felt almost raw, bruised yet tingling.

Oh, he wasn’t all that jaded with kisses. Most of the few he remembered he’d initiated with a degree of clumsiness and uncertainty. There had been nothing uncertain about Doyle. Bobby had hardly even dared to think the older man might be gay, much less attracted to a guy hardly more than a kid, a guy who had just begun to recognize that he was, indeed, gay himself.

Where I Belong (MM)
Jae Moran
In Shelf
$4.99
Tweets by
sirenbookstrand