A New Leash on Life (MM)

Beaten by the IT recession, Justin has come back to his hometown where he’s inherited a small house from his mother. Surely Barry, his old crush and sometime nemesis, is long gone. Jobs are scarce, so impulsively Justin seeks to buy into a pet grooming business. But when he has to visit the local bank for a loan, who sits behind the big desk but Barry?

Justin’s appearance jolts Barry out of his miserable rut of a life. What if they were to pick up where a brief boyhood attraction abruptly ended? Then his mother’s sudden stroke throws his whole life into a tumbled ruin.

Juggling business and pleasure can be a complex, risky endeavor. Will Justin resist Barry’s charms and flee again, or will fate give them a new leash on life? 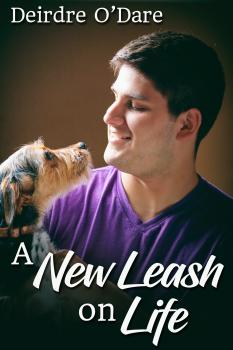 A New Leash on Life (MM)

Barry sucked in a fast, hard breath. “My God, Justin. I -- no, we won’t let that happen! I’ll check with some people and drop a hint that you’re here and do great work. It can’t be that hard. The kids are doing it, aren’t they? You’ll pick it up fast. You always were a quick study, or at least it looked that way. I don’t want you leaving now. You just got back home.”

A mixture of fury and defiance poured through Justin. Goddamn it, no. I am not going to end up so beholden to this guy that I can’t say no. Maybe I want to say yes instead, but not because I have to.

“Wait just a fuckin’ minute. I’m not going to become your pet toy boy, or let you buy me with some kind of warped charity. Either I make it on my own, or I don’t. If I go belly up, you and the bank have a lien on my house and on the contents of the shop here. You’ve got your ass covered. If I catch you meddling in my business, I’ll walk, no I’ll run. Vanish. Disappear. I did it once and I can bloody well do it again. Quit playing whatever stupid game it is you’re trying with me.”

Barry let him go and took a fast step backward. “Whoa, easy there. Don’t blow this out of proportion. We’re not going to live together or even be seen together all the time. Linda Vista’s a small town and still pretty damn conservative. I’ve never told anyone I’m gay, although some may guess that’s what wrecked my marriage. Partly true. My mother doesn’t have a clue -- at least I’m pretty sure she doesn’t. As for us, we’re just old friends from school days. That’s all anyone needs to know.”

“That’ll be all there is to know,” Justin insisted. “I ran scared ten years ago because I wasn’t even sure I was gay then, at least not sure I wanted to be. Yeah, it was different in Phoenix. I had a couple of relationships that died of natural causes. This ain’t Phoenix. And maybe you aren’t those guys, either.” He put as much disdain and dismissal into his tone as he could.

He saw the hurt flash across Barry’s face. Maybe he had made his point. This damned obsession they both seemed to have held for over a decade needed to die -- right now. In this conservative little town, how would it work if they came out? The possibilities were scary. No, he couldn’t feed and cultivate this attraction, let it grow and take root -- at least more root than it had already. No. Fucking. Way.

“You can look at anything you want to in here,” Justin went on. “It’s yours, or may become yours in a few months. After that, get out. For now, this is my space. I’ll bring the appraisal papers in tomorrow and leave them with Tina. If you still want to give me the loan, it can go straight into the account I opened the other day. I’ve still got a virtual signature set up from my old job to do the paperwork.