Nathan Pratchett's last relationship ended because he spends too much time at the barn with his mare, Birch. But he finds peace in the saddle.

However, Birch seems to have other plans.

After losing a shoe while out on a trail ride, Nathan is forced to use a new ferrier. After that, it seems like Birch is a different horse. She's gone from well-behaved to running loose! And, for some reason, she keeps winding up at the home of a dreamy fella named Lucas Shaw. Is it possible the mare knows something Nathan doesn't? 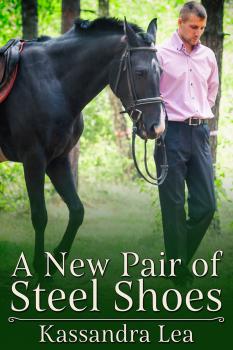 Besides, horses were important to him, did he really want to date someone who wanted to deny him his pleasure?

Nathan was about to put his phone back in his pocket, finish up his lunch, and head back to work when it rang. He blinked, stared dumbfounded at the screen. For a split second he hoped to see that it was Marsha, instead he was greeted with an unknown string of numbers. Frowning he hit the answer button.

"Hi, is this," the unfamiliar male voice paused. "Nathan Pratchett?"

Nathan opened his mouth, but the right phrase got stuck on his tongue, his brain still trying to process what just happened. A tingle had gone through his body and settled in the pit of his stomach with a flutter. It was also quite possible that his heart skipped a beat, the world around him shifting into slow motion, and all because of the voice on the other end of the phone. Struck by disbelief he pulled the phone away from his ear and stared at it, confused, trying to make sense of what just transpired.

A crow squawked shocking him back into reality.

A tinny voice beckoned him from the phone and he put it back to his ear. "Yes," he finally managed to get out. "This is Nathan Pratchett. Who, may I ask is this and how did you get my number? And let me just say, if you're trying to sell something I'm sorry, but I'm just not interested."

The man laughed lightly and Nathan shivered. "Nothing like that, I assure you, and my name is Lucas Shaw. I went outside a few minutes ago to fetch something from my shed and was quite surprised to discover a horse rooting around in my garden." Nathan's back straightened, a shot of panic slicing through his body. "I managed to get ahold of her and found your number on her halter. I was wondering if you might be able to come fetch her?"

Nathan practically jumped off the bench heading back to the office, his mind racing. He would have to use personal time, explain the situation to his boss, and then go out to the barn to borrow a trailer. Thankfully his boss was the understanding sort so he saw no problem getting the time off and he had the rights to use Eleanor's trailer whenever he needed, he'd just shoot her a text to let her know. What really bothered him, however, was how Birch managed to get out to begin with. Unless someone left a gate open she shouldn't have been able to get out. Could she have jumped the fence?

"I'll be there as soon as possible," Nathan breezed inside. "Let me just inform my boss that I need to leave."