A Path of Petals

Griffin Holt arrives in England intent on selling his deceased father's house and returning to America as soon as possible. Griffin is a workaholic, annoyed at this forced change of routine. When he gets lost and can't find the guest house he should be staying in his frustration multiplies. He follows a constant line of blossom trees, hoping to find at least one signpost. Instead, he encounters an odd, bohemian woman twirling in the road and showing no signs of moving.

Rain Teslar knows who the man in the car is, the whole town does and they've been waiting for years for him to return. He just doesn't realize it.

Rain instantly strikes up a friendship with him, though it isn't reciprocated at first. Each day her carefree nature annoys him a little bit less, and her help with unraveling the secrets of his past has him seeking her comfort. However, if Griffin's new life is to be a fresh start, changes have to be made—changes neither of them are willing to make.

Content Warning: Contains moments of cuteness that will make you swoon, along with sexy interludes that will increase your temperature. Also uses random, amusing British slang. 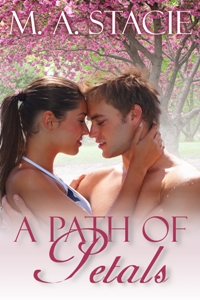 A Path of Petals

"...I was taken by the relationship forming between the two lead characters. So utterly different there shouldn't be any romance happening between them, but yet it just seems to work. Not to mention the steamy and romantic love scenes that can take your breath away, this is definitely one to read." Roni at Romance Book Scene

Griffin took a lazy look at her. She was clad in a tight green tank top, tiny white shorts that molded her ass, and a pair of striped knee high socks. Her newly curled hair bounced around her shoulders, her ass jiggling as she shook her hips.

"Do you want me, baby?" Rain bellowed along with the tune.

Griffin leaned against the door frame, folding his arms across his chest and smirking.

The last line was accompanied by a special pop of her hips. Griffin adjusted the front of his jeans because they had suddenly become two sizes too small. He couldn't tear his eyes away, watching every undulation of her body and feeling every swish of her hips like it was a punch to the gut. She entranced him but he still wasn't convinced that he liked her.

Rain lifted her arms up, making the pink floral tattoo ripple on her skin. Continuing to bop in the kitchen, she was oblivious to his perusal. He couldn't drag his gaze from her, fleetingly wondering where those other petals that she'd mentioned were on her body. Shaking his head, he tried to dislodge the thought, even though it was becoming increasingly difficult. The movement of her body raised the hem of her tank, flashing a slip of pale skin. His mouth was suddenly drier than the Sahara.

Rain spun around grinning, clearly unconcerned that she had just been caught singing about rather mortifying exploits. "You like spying on me, don'tcha?"

Griffin gaped, all words flying from his head. "Um…I… Well…no!" he eventually stated, after gaining some composure. "I was not spying, and to be honest, if you didn't like the idea of someone walking in on you and seeing your little dance, then you should have kept it confined to your room."

She quirked a brow and cocked a hip as she added, "Really? You've been here two days, and yet you feel the need to offer me pointers on etiquette? And here I was thinking that you needed training in the art of manners."

"I'm not offering anything. I just thought—"

"Forget it. I was just pulling your leg. I kind of like ruffling your feathers anyway."

Griffin bit the inside of his cheek, trying to stop a groan from exiting. He was thinking about her pulling something entirely different. Again, he wondered what the hell was wrong with him. Maybe there was some strange drug in the water here. 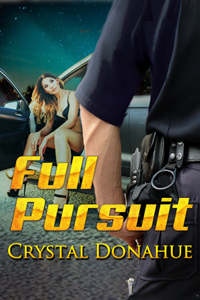