A Question of Taste (MM)

Steven and Conrad are cruising along now, until Steven tries to figure out where they stand. Are they a couple? A pair of misfits? Just friends? Sometimes deciding what you want and what you need is just a question of taste.

A Question of Taste (MM)

There is something of the sea in a man's semen: salt and brine, a thick rush of primal fluid that evokes the sharp taste of a gulf's warm water, a flavor that puckers the mouth and tongue. For Steven Pershing, tasting it for the first time was like coming home.

It didn't start out as their first argument. It was a Sunday afternoon, the Florida heat creeping and humid outside. In their motel room, the AC was cranked up, the TV was turned low. Steven had one leg looped over Conrad's thigh and he listened to the other man's heartbeat, steady as a metronome.

Oh, this feels so good. So right.

Three months since the undercover operation. Three months of night's in Conrad's bed. Three months ... together. Steven sighed and stretched. His contentment being in Conrad's bed surprised him. As odd as it sometimes felt to wake in the night and realize that another man held him, there was something special and precious about this.

He knew Conrad was dozing, could tell by his slowed heartbeat. Out of curiosity, Steven had counted one morning when Conrad was still asleep and found his lover had a resting pulse of only forty-two.

Conrad made his own pulse race though. The way he touched Steven, the things he said in that throaty growl of his, the pure sweet taste of his caramel skin made Steven ache. Conrad would press him against the wall or throw him on the bed and Steven would go weak. The sight of Conrad on his knees in front of him made Steven's knees shake, literally shake.

Time to do a little exploring. My turn to make him shake.

He straddled Conrad's thighs and bent low. His fantasies sparkled in his brain like champagne. He'd wanted to try this ever since that night in Conrad's apartment but he had held back, not sure why. There was something so primal about this act; subservience and conquest, control and acquiescence. 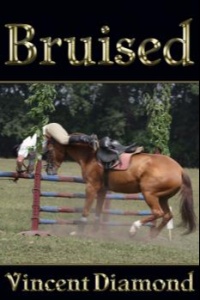