A Rare and Beautiful Thing (FF)

Miranda isn’t sure if she is transgendered or a lesbian. When Cal, a gay boy her age comes to stay next door for the summer, they become close. Even though they are opposites, they are both outsiders, and their friendship blossoms over the summer. Could there be romance despite their differences?

Then twins Ada and Van move into the neighborhood, and Miranda finds herself torn between them. She can’t decide who she’s more attracted to -- Ada, who may be lesbian, or Van, who is transgendered. Will she find love with one of them instead? 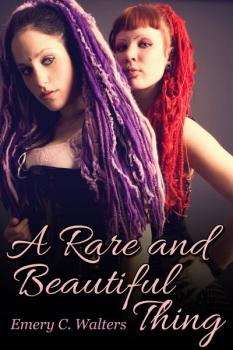 A Rare and Beautiful Thing (FF)

What were the odds that the only two transgender kids in our high school -- if we were the only ones -- would find each other and even like each other? I’ve heard of trans people who sneer at others because they’re not as trans as they are, or that they can’t be trans because they haven’t done this or had that -- yet. You should not do that, throw rocks at your own people, live in a glass house and smash your own windows. You have to stick together. And then there was the whole LGB or GLB or LGBTQI etc. thing. Where do you stop including people?

Nuts to that. Here I was in the golden woods, leaves crunching underfoot, the whole beautiful sunny autumn day thing, with a beautiful person who liked me back. There was no way I was going to ruin it worrying about things I couldn’t change anyhow. Hell, I’d be lucky if, some fine day, I could even change myself.

I managed to steer us, without thinking about it, to the little glen where I’d smooched Cal. It was a happy place, and brought Cal’s spirit back to me as if he were really there. I wished he were.

“This is beautiful,” Van said approvingly. “I like it. What a day, huh?”

If you’re waiting for us to make love, don’t hold your breath. I wanted to kiss him more than I’d ever wanted to kiss anyone, other than Cal, of course. But I held back; I mean, technically he was the boy, right? But as he lay on the leaves beside me, idly watching the clouds go by and without a clue in the world about how gorgeous he was ... well, maybe a little clue, I thought, as I caught him cutting his eyes over at me and then looking away innocently. Yeah, innocent, my hind end. He was pursing his lips together now and sighing.

My mouth -- I had no idea this was going to happen but suddenly I said, “Are you gonna get hormones and grow breasts?” Well, that was that. His eyes filled up with tears. His breathing changed to short little gasps like he was going cry. His chin trembled and that was it for me. I didn’t care if he had boobs on his butt or dicks growing in his armpits. Whatever inside him was showing up so fearfully on the outside, his emotions, his thoughts, his caring, his needing, it tore my heart open, and while there was still Cal in there, a gaping hole had opened up that Cal could not fill. Cal didn’t fit in this part. Ada didn’t fit. Nobody fit, except this person here beside me. Van.

So this time in the grass, I was the one doing the kissing, initiating it like I thought I would with Cal. I was the one pressing myself on top of the other, and I was the one whose soul thrilled to his response. If this was lust, I’d be terrified of love. But it wasn’t lust, because I needed this person, this other spirit, to be with mine. The kissing was sealing wax on an undying declaration of love, and need. If -- and probably when -- we got around to doing the deed, I thought at the time, that we would use whatever parts we had at that time. The love we shared would overcome any dismay that might occur because the outside of the person did not meet our expectations, our thoughts based on our ‘chosen’ identity. Chosen not in choosing to be gay or lesbian or trans, that’s just what we were, but chosen as a self-labelling device to clarify things for ourselves as well as others.

That said, we kissed for a long, long time. I think we only stopped because I got a tickle on my arm. When I lifted my head to look, I saw it was a butterfly, so out of season that it shocked and delighted us both. We both laughed when it landed on his nose, as if to kiss him, and then if flew away. We looked at each other, thinking, what a rare and beautiful thing to have happened. I felt like it seared my heart. I pulled down my sweater and showed him my tattoo, and when he ran his finger over it just like Cal had, I almost died.

When we left and walked each other home, dusk was falling and a chill had finally bitten into the warmth of the day. The sun was glowing red far to the west, and a wind had come up to shake the remaining leaves off the bare, dark trees, but the warmth and beauty of the butterfly still remained.