A Reason to Kill

Young hotshot Detective Geminer became a police officer to put away scum like the man who killed his father. His latest case, the Do-Good Killer, chooses his victims based on prior criminal records and thinks their history of crime is justification for his murders. As the isolated Geminer attempts to capture the elusive criminal, cope with the loss of his father, and find normal human relationships, he questions his own motives behind being a police officer and begins to learn that he and his enemy have quite a bit in common. 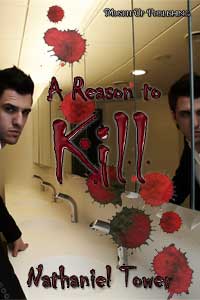 A Reason to Kill

Clint's self-assurance didn't prepare him for what awaited him inside. He pulled out his dust mask as he went inside. The mask fell out of his hand at the sight of the blood-soaked floor and furniture in the front room. The blood hadn't pooled in one spot like it would have from a quick wound. Clint was glad he hadn't worn new shoes as he stepped through the scattered bloody seas that flooded the room. On the other side of the couch he found the victim, at least what was left of him.

Rather than finding one body with a solitary wound, he found several pieces of a body, each with numerous stab marks. Whoever had done this had chopped the body into pieces after slitting its throat. Or perhaps the perp cut off the limbs to torture the victim first, and then slit the throat. Neither explanation sat too well with him. Clint imagined the situation. He couldn't understand someone cutting up a body after killing it. The sight of a man standing over the body and chopping off its limbs disturbed him more than anything he had seen in any thrasher movie. He hated to think anyone would spend all that time torturing a dead body. But he also couldn't understand the opposing scenario. If you were going to cut someone up to make them suffer, why would you slit their throat and drain out all of their blood afterward? Neither explanation seemed to fit in with the Do-Good Killer's general motivations or styles. The Do-Good Killer operated quickly and efficiently, leaving behind no potential traces. A murder executed in this fashion must have left behind dozens of traces, and Clint intended to discover them all. Perhaps the killer had become sloppy, or perhaps he was angry that night. Or perhaps he had truly a psychotic mind and was not the swift justice criminal they thought he was.

As Clint crouched near the body, he tried to get into the head of the criminal. The Do-Good Killer killed because he thought the legal system had failed. He made the killings as quick as possible, and probably got no pleasure out of the actual killing, only taking pleasure from the actual deed of eliminating a criminal. This act looked like the aggressor had gotten plenty of pleasure. Clint assumed the Do-Good Killer was responsible for this even though the pieces didn't all fit. He assumed this because it was his job, but he wondered why the man would have stooped to such a heinous act. He knew there must be a reasonable explanation as to why the Do-Good Killer would've done it this way, but he was too shocked and tired at the moment to think of that reason.

He investigated each piece of the scene, starting with the neck wound. Its diameter was less than three inches, just like the others had been. A clean cut. Straight in, straight out; on the right side of the neck, just like the others. He assumed DGK was right-handed and stabbed the victims from behind. Or was he left-handed and had the gall to stab them while facing them?

Clint took photographs of the wound from different angles. Before arriving at the scene he expected to see a gun shot wound this time. So much for the symmetry of the crimes. It was impossible to tell if there had been any struggle, but Clint guessed this victim put up a fight. The victim might've even recognized the DGK. Perhaps that was what caused the DGK—if it was him—to act in such a way. Or maybe he was changing up his style to create a more difficult trail.

Clint wasn't interested in the other wounds, but he examined the rest of the body. The victim had light brown hair, much lighter than his own. From the picture ID of Brad Thompson, Clint knew this color matched. As he scanned the body closely, he finally found the clue the Do-Good Killer had not given him before: a single dark brown hair was stuck to the bloody stump connecting the left leg to the torso. The hair color was quite similar to his own, and he hoped this indeed was the killer's and not one lodged loose out of his bed-messed head as he bent over the mutilated pieces. Regardless, he picked it up carefully with tweezers and placed it into a translucent zippered bag.

"Torrez," he shouted after sealing the bag.

Torrez came with a silent nod.

"Found this hair on the victim. Doesn't match his own. See what you can do with it."

"And Torrez," Clint said without looking up at the short officer he knew was about to walk away.

"Yes, sir?" he repeated, this time adding some inflection.

"Next time, speak for yourself."
"Yes, sir," Torrez responded as he turned and walked away, leaving Clint wondering if the little man could say anything else.