The Army breeds aggressive competitors. Private Liam Kelly, a Boston intellectual, almost comes to blows with another private, Austin Brown, a Texan redneck, during dog-handling training before deployment to Afghanistan. An antagonistic relationship in a war zone can get one killed, so the two warily keep their distance. An ambush leaves them sole survivors in an enemy-infested wilderness far from their base, forcing the pair into a dangerous trek. Days spent trying to sleep under a small tarp, hiking in tattered uniforms, hungry, and tired as, accompanied by their bomb-sniffing dogs, they use nighttime to hike across treacherous terrain toward their home base.

'Don't Ask, Don't Tell' appears the safest way to go, but Liam finds nothing safe in the Afghan wilds, and comes out to Austin one night, feeling that if death awaits him out here, then he would rather not die as a phony. To his vast surprise, it doesn't seem to make much difference to Austin, and one night he wakes to find his companion spooning with him−and then more.

Liam enjoys the newfound closeness, but wonders what will happen when−if−they get back to base. An alliance in the wilderness is one thing, but could the intrusion of the 'real world' lead to disaster? 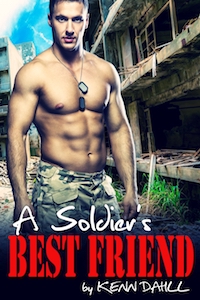