A Scoundrel in Silk

Sir Henry Polglase—Polly to his friends—cannot deny his desire for Titus Kandel. But there’s a grave complication. Titus is a slave, and Polly is a slave trader. It seems unlikely Titus will ever forgive him, but Polly trusts to his luck, letting fate take a hand in the future he hopes they can make together.

For hearts as well as fortunes can be won—or lost—on the turn of a card.

A Scoundrel in Silk is the second installment in the Chevaliers & Charlatans series. Find out what the crew of the Audacious got up to before they became the Pirates of Port Royal! 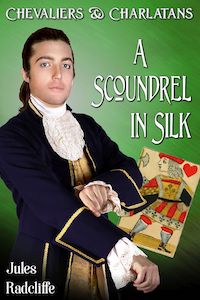 A Scoundrel in Silk

The water Titus brought was cold. No word of rebuke passed Polly’s lips, for he had already resigned himself to an uncomfortable journey. There was no softening in that dark face, no hint of forgiveness in the candid eyes. But Polly could not accuse him of insolence—since entering the cabin, Titus had stared very deliberately at the floor.
“Get into bed,” Polly ordered tersely.
“Yes, master.”
Polly’s lips thinned at the subservient tone, and at the title he had instructed Titus not to give him. The slave reached for the thin mattress, tucked into a space under the berth. Polly put a hand on his arm to stop him, and Titus flinched as if he had been burned.
“In the berth, Titus.”
“A proper slave sleeps on the floor, master.”
“But you are a most improper slave, and an impertinent one too. Get in before I’m forced to discipline you.”
For the first time since the wardroom, Titus’ eyes lifted to meet his. “Mayhap I deserve to be beaten. Master.”
Polly stared coolly into those defiant eyes. A slow smile spread over his mouth. “If this is how you speak to the man who does call himself your master, I’m surprised you’re still alive. Now get into bed. I’m too fatigued to argue further.
“Yes, master.”
Though the words were whisper quiet, the sarcastic tone burned Polly’s ears. It seemed impossible to break through the man’s hostility.
But there was more than one way to skin a cat.
Polly busied himself at the basin. He watched from the corner of his eye as Titus stripped to his drawers and climbed into the wide berth. The man lay on his back tonight—the bruises on his arse seemed to cause him less pain today. Van Wyck knew precisely how hard to strike so that the damage did not affect his slave’s ability to work. Polly gritted his teeth at the thought, wondering if the cuts that bled had been accidental—due to lecherous excitement—or calculated. He could not decide which reason disgusted him more.
Satisfied that Titus was settled, an arm across his eyes to block the light, Polly doffed his clothing. Every stitch. He was proud of his physique, which he took care to keep fit with exercise. Parading naked around his cabin, he ostentatiously stowed his garments, rattled drawers as he took out toilet articles, and created a deal of splashing as he washed. He lovingly laved his upper body with the cloth. Humming a little tune, he carefully cleaned his privates, grinning to himself when he caught a glimpse of an eye peeping at him. Yawning, he stretched up on his toes, showing off his body to the covert watcher in the bed.
It was a hot night, so he left the window propped open. He doused the lantern. Faint starlight penetrated the cabin, but not enough to illuminate. He felt his way over to the berth, climbing up into it. As his eyes grew accustomed to the gloom, he could see the figure lying beside him, dark against the pale sheets.
“I thought we’d agreed to be friends, Titus,” he said into the tense silence.
“That was before you went into business with Jonkheer Van Wyck,” replied Titus after a long moment.
“I don’t see how it matters. You know I need money, and his is as good as another man’s.”
“You wouldn’t understand.”
Polly sighed and settled on his back. “I don’t suppose I would. I cannot imagine how it must feel to be another man’s property.”
“And yet you don’t hesitate to make men the property of others.”
“Nay, ’tis the traders in Africa who do this. We merely bring them to the Indies.”
“You quibble, just like a merchant. I had rather sleep than talk, if you please.”
“There are many things I’d rather do with you than talk,” said Polly softly.
“I have no choice but to serve you,” said Titus, making no effort to disguise his scorn. “Just as I serve Jonkheer Van Wyck. Master.”
Again, the title that set his teeth on edge. Not to mention the comparison with the vile Dutchman. Polly took a calming breath, knowing Titus was being deliberately provocative. Last night he had genuinely feared Polly would violate him; mayhap that fear still plagued him and he covered it with this brittle defiance.
Polly rolled onto his side. Against the white-washed bulkhead, he could see the man’s noble profile—high, intelligent forehead, commanding nose, the dip of firm lips, the thrust of a stubborn chin. He longed to trace the contours, but he would never lay a finger on Titus without his permission.
“I dreamed of you last night,” he said in a low voice. “We lay beside each other—just as we do now, only you were my lover. I shall dream of you again tonight. I know what will be in that dream, for I have thought on it all day. Shall I tell you?”
In the dark, he heard Titus’ breath catch.