A Step Too Far

Gina Tortomelli and Nikki Manning have been friends since childhood, but now with college over and the stresses of working life, things are beginning to come unraveled as lovers. Nikki is moving further and further into an exploration of her submissive desires, which Gina is uncomfortable following her into. In a local newsmagazine, Nikki discovers a new, avant-garde company specializing in bringing women a submissive sexual experience in a safe environment. Anxious to try bondage, Nikki raises a fuss when Gina doesn't want to play, forcing her lover to investigate the company. Calling the paper, Gina finds out the company has been checked out thoroughly by the PD, and she meets Andrea, a police officer who is also inexperienced but curious about bondage. Gina invites Andrea into her relationship with Nikki, hoping for a friend and ally, but then sparks begin to fly. Gina's insecurity flares and Nikki becomes bitchy in return when Gina feels Andrea is getting closer to Nikki than she is.

Nikki continues down a slippery slope of submission, trying to attract Andrea and at the same time confusing and repelling Gina. Eventually Nikki meets Jack Gabriel, who is not at all what he appears, but seems to the submissive to be all she desires. As Nikki is slowly drawn down the road to total enslavement, Gina moves in a surprising new direction, and Andrea struggles to keep the three of them together. Will Nikki give in to full submission, and will Gina find herself as she becomes a person she never thought she was. In a tale of change and renewal where everyone has something to lose and something to gain, who will take the step too far? 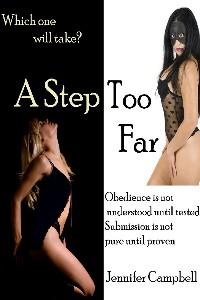 A Step Too Far

"Danny, Gina and I want to play a game. We want you to be our Master, and make us serve you as your slaves. Please understand, I want you to be dominant, take control of the situation. Do you understand what I'm asking?" His erection now waved in her face, but she waited patiently for his answer.

Nikki shook her head. "No, I want you to master me, make me do what you want, not just tell me."

Now Nikki smiled and nodded, and Gina shivered glad she still had her panties on. She had watched Nikki do this before, with different guys, with varying results, but Nikki had never been satisfied. However each time Gina watched, she thought of how hard it would be for her to put herself in Nikki's position, the submissive.

"Suck my cock." The command came out of Danny's mouth with authority, an authority he assumed would make Nikki jump to the task, but he was wrong.

In her desire for real domination, Nikki simply knelt there, looking sexily up at Danny with her mouth open but unfilled. She had no intention of sucking his cock at his command; she wanted his action to force her.

Danny moved his shaft toward his mouth, figuring he could simply take possession of the warm wetness, but Nikki was having none of it.
Folding her arms over her breasts, she closed her mouth, refusing him entry. For Nikki, what Danny did next was a moment of truth.

When Danny stopped in his tracks and looked down at her with confusion in his eyes, her heart sank. It doesn't look like he's the one.

"Okay, so what is this, a cock tease? You say you want it but then you refuse." Danny's confusion could perhaps be forgiven, in the climate of politically correct sexual relations, but what Nikki wanted was not politically correct.

"No cock tease here, If you make me suck I'll suck, and I'll love it." Again Nikki opened her mouth and her knees, perhaps to add to his desire to have her. Letting her right hand find her labia, she slipped a finger into her moist tunnel.

Looking like someone had stolen his toy, Danny sighed. "Okay, babe, it's your game, what do you want?"

"I told you, to be mastered, made to suck you. Can't be any plainer, Danny." Nikki voice was raised, and Gina simply couldn't believe how determined she was.

Clearly amazed, Danny was speechless for a moment. "Well, I don't know, that's not something girls usually want. You're telling me you really want that, for me to grab your hair and force myself down your throat? I'm not sure I can."

"Why are you not sure, Danny?"

"I've never done anything like that before. I'm not sure I could do it." His voice sounded sheepish.

Exhaling and looking scared, Danny wades in the deep end and grabs hold of Nikki's mane. Not jerking her head to take control, he simply holds her still so as not to hurt her. Moving his erection into her mouth, he doesn't have a chance to get all the way in before Nikki moves her head deftly, dislodging his cock and pulling away from his grip.

Danny is outraged. "What the fuck, I'm trying to give you what you want, bitch. Can't you cooperate at all?"

"No, I can't and I won't. That's the point you don't get, I want you to force me. It was a crappy first attempt, but now you're mad, so maybe you'll do better." To Gina's amazement, Nikki opens her mouth to prompt him to try again.

Danny is mad now, but he is still Danny. Grabbing her locks again, he jerks her head back but cringes as he does it. Feeding his shaft into her warm, wet mouth, he gets all the way in before he hears her gag. Proving his lack of real dominance, he pulls back asking her as he does. "Are you okay? Did I hurt you?"

Ripping her head from his groin, she looks up at him with disappointed eyes and sputters her response. "No, Danny, I'm fuckin fine, but you're done. Get the fuck out of here, your time is up."
"What, you fucking cock tease, you're not throwing me out. Not before I get some pussy."

Standing up, Nikki aggressively moves toward him despite her smaller size. Reaching out, she slaps his face and grabs his cock. "There's no pussy you can get here, just pussy you can take if you can, but you can't." To make her point, she twists and pulls up on his shaft, making him squeal in agony.

Suppressing tears, Danny throws parting shots and retreats to a chair where his clothes lie. "Fucking cock-tease bitches, you'll get yours some day." Dressing as Nikki watches, he remarks to her.

"You play this game too long, bitch, you're gonna get hurt."

Cool as the other side of the pillow, Nikki stares at him until he looks away. "Perhaps, but not by you, so get the fuck out."

Sleeping with the Band
Dee Dawning
In Shelf
$3.99
Tweets by
sirenbookstrand