A Succubus for Christmas and Other Tales of Devilish Delights

The succubus is an enduring icon of myth, a demon that seduces and sleeps with her prey before taking their life and soul. In this collection M. E. Hydra brings you thirteen erotically charged tales of sexy succubi and other exotic creatures.

In A Succubus for Chistmas a man discovers his surprise sexy gift also possesses a dark side...The Masterton Covenant asks how much would you risk for one night of perfect pleasure...Four men are taken to a very special place in Flesh Pitchers of Prague...A tough demon slayer discovers why 'Men can't fight them' in Slayer vs. Succubus...A man gets his Happy Ending in a sensual massage that touches him right to his soul...A former soldier tries to resist the wiles of an exotic alien queen in The Coils of Aenictia.

Prepared to be enthralled, aroused and terrified by these and other tales of dark, seductive beauties. They'll give you pleasures beyond your wildest dreams, and terrors beyond your darkest nightmares... 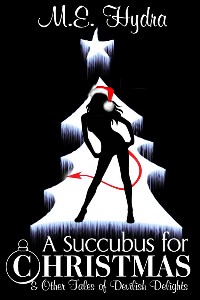 A Succubus for Christmas and Other Tales of Devilish Delights

"If you’re looking for a collection of works that steams up your screen, look no further! Not only do these thirteen stories bring a satisfying flush to your face, they enthrall you in a world where dark nature devours its prey. This collection of shorts is sure to evoke fear from you and satisfy your senses."

Ennis grabbed a beer from the fridge, walked into his bedroom and switched on the light.

He was shocked to find a girl sitting on his bed.

No, not quite a girl. Something else.

She looked like a petite young woman, but her eyes gave her away as something not human. They were pure black. No whites, iris or pupil, just an abyssal black all the way through. Her face was delicately elegant, almost elfin, apart from a pair of full, sensual lips. Incongruously, a Santa hat was sitting on top of her head between two pointed ears. Wavy red hair spilled out from beneath the hat to cascade like flames onto her pale shoulders.

When she saw Ennis her face split in a broad smile.

“Master, I waited for you,” she said in a voice that chimed like silver bells.

Her slender, pale body was naked apart from a couple of strategically placed pink ribbons. Smiling and jiggling she reached behind her back and the ribbon around her chest fell away to reveal a pair of full, milky-white breasts. They were much larger than would be expected for such a slender body. The girl coquettishly folded her arms around them, more to bring them to Ennis's notice than hide them. Not that she needed to; Ennis couldn't take his eyes off her. She had the most beautiful body he'd ever seen.

“You're a succubus,” Ennis said, still stunned that such a thing could be real. He cast his mind back through all the wild parties he'd ever been to in an attempt to remember if he'd ever taken enough LSD to put this down to a flashback.

The girl demurely looked over her shoulder. Two small folded black bat wings rose into view. She extended them a little to prove they were real before folding them back again. A long slender red tail with an arrow-tip point curved round from behind her back. The point playfully brushed the second ribbon at the point where it lay over her sex.

“I'm yours, to give you pleasure in any way you desire,” she said. 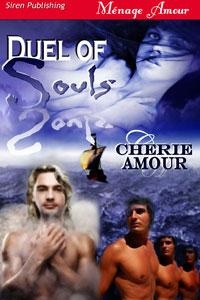 All Alone in the Night
Michelle Houston
In Shelf
$1.99
Tweets by
sirenbookstrand