A Succubus for Halloween and Other Tales of Terrifying Temptresses

Halloween is a time for chills and thrills. A time for femme fatales to sharpen their claws and take to the night in search of fresh prey. Cuddle up in front of an open fire as M. E. Hydra brings you a delectable dirty dozen of tales about ravishing succubi and other sensual predators.

A man uses a succubus as an instrument of revenge in “A Succubus for Halloween”. An unusual treatment for claustrophobia is prescribed in “Naga Special Massage”. In “The Pearls of the Mediterranean”, a group of holidaying lads discover an exotic nudist beach with a secret. Things get wet and slippery while “Oil Wrestling a Succubus”. Against the backdrop of demonic invasion, a soldier is subjected to the fleshy pleasures of “Capramendes, the Milkmaid”. And finally, a doctor finds a sexy companion for “A Halloween Party with a Succubus”.

Sit back and enjoy these and other tales of weird, wanton and wicked temptresses. They'll give you pleasures beyond your wildest dreams, and terrors beyond your darkest nightmares... 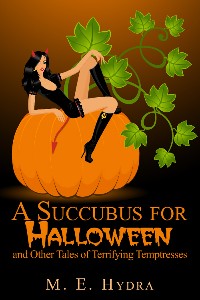 A Succubus for Halloween and Other Tales of Terrifying Temptresses

The source of that extra excitement was also trivial to work out. There was clear evidence the young man had been engaged in vigorous sexual activity right before he’d died.

With who, now that was the interesting question.

It should have been ‘with what’, as Landis was to discover later that night as he was sewing the corpse back up.

Landis jumped in surprise. There was a girl sitting on the next autopsy table. Where had she come from? You needed a keycard to get into the lab and Landis was the only one on duty tonight.

“I only wanted to give him pleasure,” the girl said. Tears ran down her cheeks. “I didn’t know his heart was weak.”

She was quite a pretty girl, if dressed a little provocatively in a black leather bra and panties.

Landis looked more closely. Were those horns on her head? And her eyes...what was up with her eyes?

He thought it was shadows at first, but then his eyes accustomed and he realised those inky black pools really were her eyes.

Something moved behind her, dark and leathery like the wing of a bat.

“What are you?” Landis asked.

He looked at the box—the black candles were still safely wrapped up in clear plastic bags—and then at the corpse. Could an airborne hallucinogen be involved here? Some kind of exotic drug evaporating from the corpse?

He didn’t feel like he was under the influence of any foreign substance. Everything felt as it should be...aside from the semi-naked girl with horns and empty black holes where her eyes should be who’d appeared out of nowhere. ...and a tail.

He saw it, red and long like a whip or snake, dangling over the side of the stainless steel table.

“I’m a succubus,” she answered. “He summoned me.” She looked at the cadaver, currently split open from crotch to sternum, on the next autopsy table. “He was to be my master,” she added, more tears running down her pale cheeks.

“Summoned you, to do what?” Landis asked.

“To give him pleasure, in any such way he desired,” the girl answered.

She stared directly at Landis and for a moment he felt the full force of her sexual attraction burning on him like the light from an interrogation lamp. Only for a moment, before she glanced coyly away. Landis gulped.

“I didn’t mean for him to die,” the girl said, her petite frame rocked by a series of sobs. “Now I have no master and without a master I can’t stay here. I’ll have to go back...unless...”

She looked back at Landis and gave him a smile winsome enough to melt the craggiest of hearts.

“Will you be my master?” she asked.