A Tale of Fur and Flesh

Princess Lally was a happy child until her mother’s untimely death. It was then her devastated and distraught father locked himself away, leaving Lally to grow into adulthood without parents to care for her. When the King finally emerges after ten years, he is no longer the man Lally remembers from the halcyon days of youth. He has descended into lunacy, and is intent upon marrying his daughter.

Lally’s joy at her father’s return quickly becomes rage, and she takes refuge in the darker realms of her personality, surrounded by a forest of shape-shifting creatures. Disguised as a peasant girl under layers of furs, she seeks shelter and protection in the land of the good King Aelwyn. Will Lally remain in the dark world of the shapeshifters and succumb to the same madness that has overtaken her father, or will she find relief from her suffering in the one man who treats her with kindness? 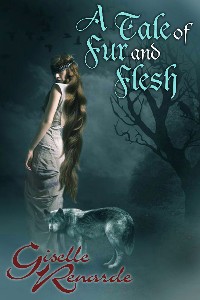 A Tale of Fur and Flesh

Revere the natural world. That’s what mother taught. Honour the forest and its creatures will respect their humble visitors. But mother was gone now, so Lally climbed the mulberry tree, ripping thin sheaths of bark from its trunk. Ten years, and still father was grieving, locked alone in his chamber. Lally found a sturdy branch to sit on before tearing fruit-bearing offshoots from the great tree. Mother was dead and father was an impotent ruler. An absent parent, as well. He didn’t care a crumb about her. She’d grown into womanhood without him. If only he had died instead of mother. Mother was so knowledgeable and caring and wise. She could easily have run the kingdom on her own.

Black juice bled through pink silk as Lally smeared the fruit against her tattered gown. Tearing mulberries from their stems, she pressed them into the fabric of her slashed skirts and armless bodice. Her dress now stood dark against her pale skin. The contrast was pleasing. Her body was life costumed in death; peaceful death cloaking useless life.

“Ah, you too are dressed all in black,” Lally said to the tree snake slithering along her branch. She had no human companions. Why shouldn’t she speak to the creature? “Why do I exist?” she asked him. “I have no purpose, no friends, no utility. If she ceased to be, who would miss the abhorrent princess?”

“I dare s-s-s-say,” a throaty voice hissed. “I should miss you greatly.”

The unanticipated response shook the princess. Nearly falling from her branch, Lally jerked around to see who addressed her. She had not heard any person’s approach, and indeed saw no man about.

“Who speaks?” she commanded. “Reveal yourself.”

“As you desire, your highness-s-s.” As the dark voice replied, a gust of wind forced Lally to grip the wide branch with all her might. The small tree snake grew and grew, sprouting human arms and legs. The flesh of his core was formed of black snakeskin, gleaming like chainmail. With his newly-formed human hands, he rubbed his snake’s head to reveal a human countenance. Long hair shone black as his eyes, but his face was pale as winter.

So the tale was true! The villagers believed all forest creatures to possess human wisdom. But, despite their capacity to take on fleshly form, it was said they only did so over matters of great import.

Lally’s heart leapt from her breast to her mouth. She was utterly unable to speak. Snake’s eyes, partially veiled by raven locks, shone like two candles in a cavern. Great insight glowed from the dark gaze of this manly being. It was as though he viewed her from a distance, but knew precisely what she desired. To touch his drawn cheeks, caress his thin pink lips, to feel the smooth black diamonds upon his chest...

Her Ex-Marines (MFMM)
Becca Van
In Shelf
$1.99
Tweets by
sirenbookstrand