When cantankerous, persnickety Adria, princess of Laradale is awakened and hurried off to her father’s chambers, the only thought in her mind is of a shining knight from a distant land come to take her hand in marriage. She learns she is half right – there is a shining knight, and he is hoping to marry her. But, before that can happen, he must prove his worth by saving her from a monster so horrible that he cannot be named.

Will Adria’s descent into the Minotaur’s labyrinth end with a heroic rescue, or in a twist of fate she never saw coming? Will her knight in shining armor prove true, or will she be A VIRGIN FOR THE MINOTAUR?

Off in the distance, somewhere beyond the walls, she heard the same scratching sound from before. Adria’s mind immediately returned to the horrific figure holding aloft the dead hero from the vault. Outside, that ominous scraping noise continued. Up and down, back and forth. She strained, but it took quite a while before she was able to orientate herself enough in the pitch blackness to figure out from which direction the sound came.

“If the sound – whatever it is – comes from here the loudest, this must be...” Knocking around the entire cell, the difference in tone was almost imperceptible, but finally she found a place where the sound was less thick, maybe even hollow on the other side. “Well, what can it hurt to try?”

Putting her back against the stone and digging her heels in hard, she pushed. It may as well have been a cave wall for how much it moved. She dug in and shoved again, gritting her teeth and pushing with all her might.

“Woops!” Adria yelped as her feet shot out from under her, and she crashed down hard on her tailbone.

She pushed herself off the dirt and gritted her teeth. “One more try Adria, one more try. This thing’s gonna move, it just has to.”

Adria gasped when her second shove worked far better than she thought. The stone practically flew backwards, out of the wall and away from her back. Through empty space, she fell. Tumbling through the gaping hole in her little chamber, and into a hallway, Adria blinked as a cloud of dust stung her eyes.

She stood, stumbled, and tripped again, falling forward this time.

That time though, something caught her - something very large, and very, very strong.

Something Sinful This Way Comes (MMF)
Karen Mercury
In Shelf
$0.99 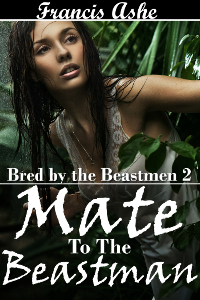