Chris Banks, livestock vet and longtime friend of Kalum Truesdale, has a secret. Ever since he met the cute, shy, yet bratty Lily Truesdale, he’s wanted to claim her. As a Dom, he knows how to take his time, enjoy the chase, however Lily isn’t taking the bait.

Lily Truesdale, is enamored with Chris Banks. The sexy cowboy with a gentle touch, does things to her no other wolf ever has. But, when his secret is spilled by one of the female wolves in the pack, she backs away, uncertain of the man.

Taking a page out of Kalum’s book, Chris devices a plan to win Lily over. He knows she has a submissive streak buried beneath her bluster. Getting her to acknowledge it is the issue. So he offers her a deal. One night with him, no holds barred, to explore Dominance and submission.

Lust combines with passion leading to an unforgettable evening of pleasure. One that unveils a deeper connection between them—which leads to one more question, will one night ever be enough? 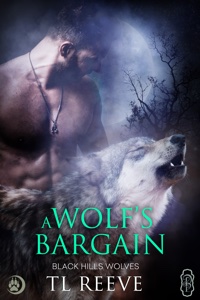 Kal gave his shoulder a squeeze. “Want help getting your foot out of your mouth?”

“I have a feeling I’m going to need it.” He frowned.

Stepping inside the mudroom, he removed his vest, hung it up then discarded his boots. As soon as he entered the kitchen, he’d get an earful from the womenfolk.

“What’s for lunch?” Kal passed him and crossed to his mate.

“Scraps,” Lily replied. Her curly brown hair had been pulled up into a messy bun, allowing some of the wavy locks to frame her heart-shaped face. Her full, bow lips were pulled in a thin line as she glared at him.

His dick thickened at the challenge held in those slate-blue eyes.

Shit. He sauntered into the room. “Sorry. I should have chosen my words better.” He glanced at Jordan whose plate had been piled high with lunch fixings. The kid chewed and swallowed faster than a jackrabbit being chased by a coyote.

Lily gave him a flippant look then went to the stove. Great, you’ve really gone and done it. Chris took a seat next to Jordan and stilled the hand-to-mouth gorge fest going on. “Easy, kid. I used the wrong words. No one is going to take anything from you.”

“Don’t let Chris give you a hard time, either. You’d think he was raised by a pack of wolves or something.” Kal nuzzled his mate’s neck, smiling at her giggle before he took the plate Lily handed him. “Thanks, little bit.”

The boy looked up at him, cheeks bloated, looking more like a chipmunk than a wolf. He gave a curt nod then finished eating what he’d shoveled into his mouth. “Okay.”

Without a word, Lily placed a dish in front of Chris. He frowned at the meager fixings. A few slices of fried potatoes, the smallest sliver of steak, and a handful of peas. However, he didn’t bitch about it. He’d caused the mess. He’d deal with it. “Thank you, Lily.”

She rolled her eyes at him, and he fisted his hands under the table. The wild, dismissive streak running through her called to his wolf. The part of him demanding her submission, no matter what it took.

He ate in silence, finishing before the others got their lunch. “I’ll see you later, Kalum. Call me if you need anything.” Chris ruffled Jordan’s hair then stood.

Under His Protection (MF)
Doris O'Connor
In Shelf
$3.99
Tweets by
sirenbookstrand