Meet the Advantage Player. An Advantage Player is one who has an Edge; a way to tilt the odds more into his favor than any casino would like if they realized what was actually going on. This Advantage Player's game is Blackjack, and you'll learn a lot about that mysterious world as you watch his visit to the casino unfold. He's in Las Vegas for a long weekend intending to score enough money for his next several month's expenses, while remaining under the radar of those who are on the prowl for players exactly like him. But this trip to this casino puts him squarely on a collision course with Lady's Night as well. That night of the week when college-age women put on their fancy dresses and come to the casino looking for the excitement of coaxing the free-spending male gamblers into throwing a few big chips their way for some free gambling. Vicky is on her first Lady's Night with her two much more experienced friends. She's worried about the whole idea because she doesn't know what might be expected of her in return for these "favors" she's about to request. While she soon finds out that this particular Advantage Player knows a secret or two in gaining his way with the fairer sex as well, things soon turn into something far more magical than either of them ever could have ever imagined. This is a tale that the big casinos can only hope is fiction. 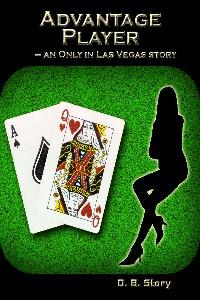 Heat Rating: Sizzling
Word Count: 21,146
0 Ratings (0.0)
Romantic Suspense Erotica Fiction
In Bookshelf
In Cart
In Wish List
Available formats
PDF
HTML
Mobi
Professional Reviews
A Romance Studio Review by Steph B. - 4/5 STARS!
(A) fun and interesting look at the world of gambling from the view of an advantaged playerI found the description of the mechanics of a blackjack game fascinatingI thoroughly enjoyed this steamy and charmingly wicked contemporary romance. Take a gamble and read this one for yourself! D. B. Story is a new author for me but one I will look for again.
Read more
Excerpt

What I hadn't planned on came next.

I should have remembered that this night of the week is Lady's Night at this casino. I'd heard about it from the reality show.

What is Lady's Night? It's when the twenty-something young women in town put on their evening best and arrive en masse to assault the middle-aged men.

Now don't get the idea that I'm being overly harsh here. These aren't whores, hookers, adult entertainers, or any of the other professional working girls. In fact, prostitution is illegal in Clark County where Las Vegas is located. You have to travel a good seventy-five miles or more to a county where that is accommodated.

These are just very pretty single girls-who unfortunately know too well just how pretty they are-out to have some fun at someone else's expense. Considering how many of them are recent college graduates just starting their way out in the world, most of them need someone else to pay for their gaming and entertainment in a place like this. And they're not shy about asking. In fact, they're usually downright direct.

Most arrive in groups of two to four, probably having shared the ride in, together for mutual support. They'll cozy right up to men with largeerstacks of chipsmen they've never met before, lean over to show some carefully exposed cleavage, maybe even plant a kiss on the cheek while asking, "Would you like me to help you play those?"

It works. It works amazingly well. Older men with money to burn being flattered by young women in skimpy dresses that often leave little to the imagination. I will never cease to be amazed just how much money a man will part with for a little flattery from a pretty girl who plans on him receiving nothing more than that. And who will disappear the moment that his money is gone.

At my table I was one of only two possible candidates, so some of them passed us by for richer hunting grounds. Also, being in the Hot Seat made me harder to reach. This was fine with me. It was a distraction I didn't need, already being up over ten thousand dollars for the few hours I'd played so far, and intending to leave with much more before the night was over.

I'd already turned down a couple of these freeloaders with a quiet, yet serious, "No thanks," when I saw Her. She stood there fifteen feet away by the nearest row of slots, looking both beautiful and forlorn at the same time.

She was tall, striking, and memorable. She looked to be twenty-four, a nice five-foot-nine barefoot, and had more class and unconscious grace than she realized. She also had a figure!

I immediately dubbed her The Woman in the Red Dress, because she wore a rich red evening dress with a deep-V from her neck nearly to her navel. I could see just enough of the side to know it was backless down nearly as far, meaning no bra was covering her clearly ample bosom. Despite the way the dress artfully bunched itself in pleats over the two sides of her chest, it was clear she had something nice residing there.

The pleated skirt part reached demurely to her knees, below which she wore sheer nylons. Her dress was matched with a red satin pair of three-inch pumps with sturdy square heels. I could see Ms. Red Dress is a big girl, and wasn't about to go tottering around in some insane pair of stilettos. What I could see of her legs made me forget about Holly altogether.

This dress was a perfect match for the waves of rich dark brunette hair cascading down around her face and beyond, and was complemented by matching lipstick and nail polish.

Ms. Red Dress was hesitating before making her first move of the evening. And she had a deer-in-the-headlights look telling me this was likely the very first time she'd ever done anything like this.

My snap judgment, before I had to turn back and play my next hand, was that there is no way she'd come here alone. She had to have been dragged here by some girlfriends who where trying to improve her clearly dreary social life with some girl's night out fun. She was a peacock among the peasants.

When I won my hand and looked back she was still there. Then, as I suspected would happen, two other, more experienced looking, girls went back over to her. One of them was a busty blonde with a far more exposed superstructure who I'd already turned down.

Although there is no way to overhear a conversation even between the players next to you in a normal casino, I knew exactly what those girls were saying to each other. Her friends were trying to get her to make her move.

It's easy, they were telling her. Just find a man with lots of chips-and a drink or two in front of him-who is winning. Bat your eyes, rest your hand lightly on his arm, lean forward a bit, and say your line. At one point they even gestured towards me, obviously recognizing the value of the black chips I was playing with now. You don't want to stand here like a wallflower all night, do you?

I could tell she wanted to do this. To go out and just have fun as easily and naturally as her friends were able to do. She yearned for it. And she knew the only thing holding her back was herself. But it was so hard to just actually break the ice this first time.

They spoke at her for a couple more minutes, then suddenly left her alone again as they targeted in on a loud, boisterous group arriving at the next table. A table where the minimum bet started at five hundred dollars. The older man leading them there was wearing a half open silk shirt whose price I wouldn't even try to estimate, plus several heavy gold chains and diamond-encrusted rings. Most of his entourage were younger men of his same ethnic group. A natural target for the women, except for Ms. Red Dress, who most certainly wasn't ready to swim with those sharks quite yet.

As she looked around for something-anything-other than that, I delayed playing my next hand long enough to catch her eye long enough to offer a sympathetic half-smile. Then I had to turn back to my cards.

Things were helped along at that moment as the player next to me busted with the last of his money and got up, leaving an empty chair next to me.

I felt the heat of Ms. Red Dress's tentative approach without looking back that direction at all. I didn't want to scare her off. I could hear her soft breath, and felt the intensity of her gaze on my blind side as she waited for an opening in the game. I played-and won-two more hands before I felt her hand descend gently onto my bare arm.

She used the same line as her friend tried on me. Maybe it's the line they all use. In a slightly husky voice she asked, "Would you like some help in playing those?"

I looked up to see the most clearly communicative-and equally indescribable-expression of anguish on her lovely face. One which silently shouted, I hope he isn't going to expect too much more than what I just offered!