India Othmar isn’t having a great year. Her husband of thirty-one years has left her for their son’s ex-girlfriend. Her grown children have moved home. Her best friend Eva seems determined to set her up with every oddball in their small Massachusetts town. And her most significant relationship these days is with Cherry Garcia.

But India is more resilient than she thinks. And though it will take a broken arm, a lawn littered with engine parts, some creative uses for shoes, and a scandalous love affair of her own, she learns, much to her surprise, that her life hasn’t ended with her marriage. 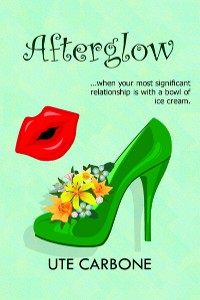 I was nearly too embarrassed to face Mitch. Upending a suture kit had been bad enough, but this… I mean, here we were having a friendly dinner. And here was Red, turning it into something sordid. I did face Mitch though. I owed him an apology.

Mitch smiled. “Nice of you to acknowledge that.”

“And Red Lansing is an idiot. An idiot who jumps to conclusions.” I could feel my face go hot. Mitch grinned at me. “I guess it is kind of funny,” I said.

“I don’t think it’s funny at all.” Mitch took my hand and kissed the place where the cast had been. Which, had I wanted to delude myself, could have been misconstrued as a friendly kiss. The next kiss, though, was a direct hit. On the lips, with feeling, and there was no misconstruing that at all.

Mitch took my chin in his hand. “I’ve wanted to do that ever since you showed up in my ER,” he said.

“I don’t know what to say,” I stuttered out.

“Maybe you should think about it,” Mitch said. “I’ll go home and you can think about it.” He fished his car keys from his pocket and let himself out the door. Halfway down the stairs he stopped and turned. “Don’t think too long,” he said. Then he was gone.