Seventies slacker (to use a word not yet invented) and aspiring writer Alice moves from Virginia to Boston in 1977, with nothing but her intelligence, sass, and a MasterCharge. Attacking life and its problems the way a shark pursues prey, within weeks she's accumulated a shared apartment, a job, and an assortment of friends that you'd expect to find on the other side of the looking glass, from crazy-assed musicians to writers to pro dommes and call girls. Not to mention the two very fine men who take turns in her bed: George, who wants a woman who can keep up with him, both mentally and physically, and Doug, a pretty boy who hooks Alice without even casting a line.

Doug , a wannabe journalist who lands women as easily as the local fishermen land cod, professes love to Alice. Yet he can't be true to anyone, not even himself, for his past holds a secret about his long-absent father, one his mother never revealed to him.

In this coming-of-age tale, Alice finds that she doesn't always get what she wants, but, as the Rolling Stones sing, she usually gets what she needs. 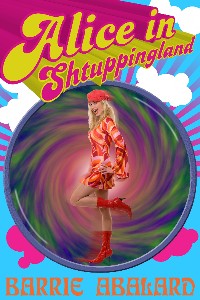 My lust didn’t keep me warm for long. Thirty-five frigid minutes later, I was staring at a street sign, shivering upon feeling the bite of the wind off the Charles River. Neither Todd nor tasty Doug had said anything about a Brookline Street. I rechecked the map to locate Putnam Ave and, after a short walk, found it. When I turned left, I could see the Cambridgeport Spa two blocks down.

A funky mixture of wet wool, spicy Caribbean food, and smoke of at least one illegal variety assaulted my nose. I'd never need to buy dope again—I could get high just stopping by to pick up my bread and cigarettes here.

The man behind the counter, clad in a rainbow Rasta hat and tie-dyed T-shirt, nodded. I nodded back. "I know Todd and Marcus. They want me to call them from here, and they said you'd let me use the phone." More silent nodding—the clerk must have been enjoying a mellow ganja high—while he handed the phone to me.

Todd answered on the first ring, telling me they'll meet me in five minutes. I thanked the clerk, who, of course, nodded. The store, at most ten by twelve, reached capacity when three additional customers walked in, so I went outside to smoke a cigarette. Before I could finish, two men, one short and stocky, one tall and skinny, approached, bundled in bulky parkas that looked like military surplus from the army-navy store I'd seen on Boylston, across the Charles.

Short and Stocky, his curly hair hanging past his shoulders with his face's lower half masked by full mustache and flowing beard, said, "Hi. I'm Todd. He's Marcus. You Just Alice for Now?"

Marcus, his Afro so large it obliterated my view of the weak sun, smiled. "We're musicians. That's how we are."

Todd bent over, howling with laughter at Marcus's non sequitur. Okayyyyy. Apparently someone else besides the nodding Rico was one toke over the line.

After his hilarity subsided to intermittent giggles, Todd stroked his mustache as if it were a pet. "Want to see the place? It's a dump, of course, but cheap, and no worse than other dumps around here. Seventies inflation, rents are sky-high, you take what you can get. At least there’s no cockroaches. Marcus and I are gone most weekends for out-of-town gigs, so we need a roommate who'll be home more than we are. Having the place occupied most of the time scares off the burglars."

"Mmm, is crime a problem?" At the thought of burglars, I dropped my cigarette so I could shove my nervous hands in my pockets. Some big-city woman I was.

"No more than any other part of Cambridge. It's mostly property crime, not muggings."

"Not in the daytime, anyway," Marcus added.

Oh, great. That meant, this far north in January, I'd be housebound from four p.m. to seven a.m. But it was cheaper than the Y. Besides, who said it was any safer after dark near the Y?

"We've got six other calls to return. You're the first applicant, so you have dibs. Want to see it?" Todd pushed.

"Let's go," I said before my inner straight person could freak.

"You working, or a student?" Marcus asked while the three of us dodged icy patches on the unshoveled sidewalks. I saw a couple cars with faded, tattered McGovern Shriver '72 bumper stickers, more with Carter Mondale stickers from the most recent election. None with Nixon stickers. After all, I was walking around in the Peoples' Republic of Cambridge.

"Working," I said, crossing the fingers hidden in my pockets.

"Your voice sounds southern. What brings you to Boston?"

"Fame, fortune, and men. Hey, why do you guys have an answering machine? They cost big bucks."

"Our manager was tired of us missing calls, so he gave us one." Marcus locked eyes with me, smiling as if he were the cat and I was the delectably-lappable cream. "Find any men you like yet?" he purred.

I was considering my reply when Todd butted in. "You got the money for one month's security deposit and two months' rent in advance? That would be, uh… “

“Two-twenty-five," I said. I’d always been quick with figures. "Yes, I have it."

"Shamrock Cab." I’d seen one moments before and I prayed these guys wouldn’t demand pay-stub verification.

"Cut the bullshit," Todd said. "You look fresh from the farm. Cabbing in the city would have eaten you alive by now."

Panic can make you tell strange lies. "I don't drive. I'm the announcer.” I put on a hard stare and my best tough-bitch expression.

Todd squinted at me. "The 'announcer'? It's called 'dispatcher'. Now I know you're lying."

"Hey, don't hassle the chick," Marcus said. "If she's crazy enough to live with two musicians, I say we believe her."

My boldness faded. Living with two musicians. Were they expecting more than rent? I had to ask, stupid as it might sound. I liked lots of sex, but I wasn’t ready to sell myself for rent. "I’ll have my own room, right? And we're talking a roommate situation, nothing more?"

Todd brayed with laughter. "Now I know she's fresh from the farm. Where you from, babe, Kansas? Toto living in your luggage? Shit, you don't look like the type to run out on the rent—the guilt would kill you. Hell, you could be a Combat Zone hooker for all I care, as long as you pay up the first of every month. And yes, we want a roommate, not a piece of—"

"Hey," Marcus interrupted, his voice as sultry as Barry White's. "The lady wants to hang with me, I won't toss her out for eating crackers."

Parts of me were melting under the glare of Marcus's bald flirtation. I liked him better than squat, hairy Todd. Marcus was fine.

"Here we are." Todd pointed to a sagging triple-decker painted baby-poop-yellow. The paint was peeling like skin after too much sun, and the minuscule yard lacked enough snow cover to hide abandoned odds and ends. "We've got the whole third floor," he bragged.

"Oh, goodie," I muttered while climbing the creaking steps. They were so narrow, Todd had to walk in front of me, and Marcus, behind. I could feel the man’s eyes on my ass. Not that I minded much.

"You got a TV?" Marcus asked. I shook my head. I didn’t even have a bed, just a couple of suitcases of stuff that I hauled via Greyhound.

"You can watch mine whenever I'm away,” he offered. “Just don't spill crap in my bed. Late on Saturday nights they show Creature Double Feature, with all that old science fiction shit from the Fifties. Like the giant ants. You know that movie?"

"Yeah, that's it. Channel 56. Check it out. Lots of fun if you're high. 'Course, if you're high with a righteous dude, forget the TV. You'll have better things to do."