Dragon Charmer—taking care of your pesky dragon problem—for a price. Business is good for Alice, right until her dragon goes crazy and bites off her arm. To make matters worse, a tall, dark stranger kills the cash-cow dragon before her eyes. Instead of dying from her wounds, Alice finds herself under the tender care of Bade, a gentle-handed Bulgarian far from home with secrets in his satchel. If they can scratch each others backs, the secrets might live on and Alice might still have a job. She’s never backed down from a challenge, but she’s in for more than she bargained for with the tall, dark stranger. 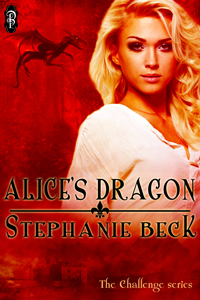 People milled about the dock, many scowling at the ship. The prevailing fashion resembled the practical slacks and sweaters of his homeland. One especially bearded fellow stepped forward when the hands lowered the gangplank.

“Well,” he said. “Been a while since we had visitors, but I reckon my men still know how to unload. What’s your cargo?”

The captain stepped forward. “This bloke’s junk. It’s below board. My men will get it ashore.”

“Can’t interest you in a few days docked?”

The captain scowled. “I’d sooner spend my coin where the lasses are lovely, the beer flows, and I won’t be set afire by a dragon.”

The mention of dragons made Bade listen harder while the crew unloaded his cargo into the waiting hands of the stevedores.

“Well now,” the oldster said. “We have ourselves a charmer, no sense worrying. The girl is working up on the hill with Rusty right now. He won’t bother you none.”

Bade spun to face where the man pointed and his heart froze. A giant red beast with a wingspan at least five times his height towered on its four legs, circling a tiny woman. He grabbed his sword and ran for the hill.

“For crying out loud,” the man said. “She has it handled. It’s what we pay her for.”

Bade ignored him, racing over the rickety dock to a narrow, pitted main street which ran straight to the base of giant cliffs. He mounted a long set of crumbling stone stairs, the sounds of growling and giggling getting louder. He didn’t know what a dragon charmer did, but Bade recognized an animal ready to pounce. The one on the hill showed all the signs of losing control.

He crested the hill and confronted the largest dragon he’d ever encountered. The pure magnificence of its size humbled him and brought tears to his eyes. How many times had he witnessed a young one cut down before it reached such wondrous proportions? To see this one alive and vibrant, even on the edge of homicide, heartened him. He’d chosen the right home.

A small woman dressed in bright colors danced around with a shield on her arm. The metal shone in the sun. Bade cringed as clouds rolled in, his bad feeling amplifying. She knew her way around a dragon, but the clouds and serpent were about to join against her.

Under Orders (MF)
Doris O'Connor
In Shelf
$2.99
Tweets by
sirenbookstrand