All Kinds of Bad

Dating the boy accused of trying to kill you is complicated. Proving he’s innocent is downright deadly.

Seventeen-year-old Lydia’s life is jolted when she’s nearly killed in a drive-by shooting. Things take another crazy turn when she meets Nathan, a hottie with a killer smile—and a delinquent past.

Romance ignites between Nathan and Lydia, but crime overtakes their small town and evidence points to Nathan’s involvement. And when he’s accused of firing the bullet that almost killed her in the drive-by shooting, Lydia’s convinced he’s being framed. But why? And by whom?

Lydia sets out to investigate, but as she creeps closer to uncovering local secrets, someone lurks on the sidelines, ready to silence her. With her life and Nathan’s freedom on the line, she must expose the truth behind the crimes, even if it means breaking the law herself.

16+ due to sexuality and adult situations 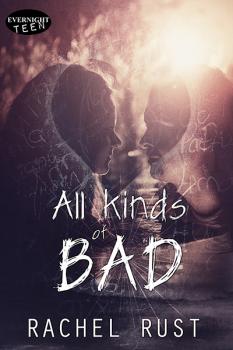 All Kinds of Bad

The stench of motor oil and metal hung in the air as I stood next to Nathan in the garage. I tried my best to ignore his arms. His muscles were not just the sleek kind that appeared on thin people with no body fat. He had actual muscles. Rounded, protruding muscles under flawless brown skin—only a foot away. My fingers flexed of their own volition. I crossed my arms, tucking my hands into submission before they decided to reach out and squeeze something.

His Camaro’s red paint was a tad faded, but other than that it looked in decent condition—at least to my novice eyes. My mind filled with phantom sounds of a rumbling engine. Parked facing the driveway, the car looked hell-bent on busting loose.

“It needs a ton of engine work.” Nathan leaned forward, placing his hands on the car. The muscles in his forearms flexed, and I nearly melted into a puddle of goo.

I forced my gaze back to his face. “Does it have a name?”

“I named my car,” I said, ignoring the voice in my head telling me to shut up and not be a dork. “I call him Frankie, but his full name is Francisco the Great and Powerful.”

Nathan laughed. “Francisco the Great and Powerful, that’s a good one.”

It was hard to tell if he was being sincere or making fun of me.

He stepped back and folded his arms across his chest. “Her name’s Caroline.”

“I like that name. Did you name it after someone? Some hot chick from a movie or something?”

Nathan exhaled a small laugh. “No, nothing like that.” The smile on his face then faded as tires crunched over the gravel of the driveway.

Just behind me, Sergeant Rollins pulled up in his police car. I mentally rolled my eyes. “Why is he here? I already told him everything I know.”

Nathan stood tall, arms crossed. His silence told me not to ask any more questions. Whatever was going on—whatever Sergeant Rollins’s business was with him—I was clearly not welcomed to be a part of it.

I took a step back. “Well … I suppose I should go then.” I meant it, but my feet glued to the floor and my mind forced me to say my next words before Rollins came into earshot. “Are you friends with Taya Pearce or anything?”

“She’s having a barbeque at her house tonight for the basketball players. I was wondering if you were going to be there.” My heart galloped into my throat as the words came out.

“I heard about that. You gonna be there?”

I nodded, unable to produce actual words as his smile overtook all my brain functions. Shuffling my adhesive-laden feet forward, I finally walked away.

“Lydia,” Nathan called out as I approached my car. My stomach flipped at the sound of my name having materialized from his lips. He leaned against a pickup in the driveway, muscular arms crossed in front of his chest, and flashed an impish grin. “Thanks for the ride. I’ll return the favor one day.”