Always and Forever Be Mine

Falling in love was never the plan.

Max Harvey was only supposed to spend a few days in the UK to solve a problem in his aero designs and then return home to the US in time for Christmas. But that was before he bumped into the hotel maid.

When Talia Wolf was suddenly thrust into the role of parent to her five-year-old nephew, Charlie, she had to give up the archaeologist career she loved. Now she spends her days at a job she hates, barely making ends meet, as she and Charlie move from place to place, trying to stay one step ahead of Charlie's drug-addicted father.

Two people who had never had time for love, but when they met sparks flew. With Christmas only a few weeks away is there a chance that they're just a wish away from happiness? 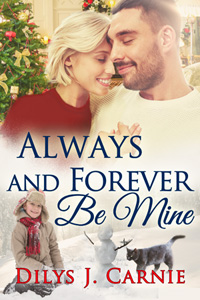 Always and Forever Be Mine

"But Aunty Tally…our Christmas tree," a voice piped up in the back seat.

Talia could tell from Charlie's tone that he was on the verge of tears, and her heart broke for him. Turning her head so she could see him, Talia smiled at him. "We'll go get one later on the bus."

She hoped she'd be a little more steady by then. The incident with Roy had shaken her up, and if she was honest, it had frightened her. She'd been so grateful when Max had come to stand beside her.

"Yes, yes, yes. Please, can we go with Max?" Charlie pleaded as he jumped up and down in his seat.

"You really don't have to." She was thankful that he hadn't said anything about the altercation that had just occurred.

"No, I don't, but I want to, and then perhaps later you can explain to me why that man was shouting at you?"

He had lowered his voice toward the end of his words, and she looked at him, about to argue, but she could see in his face that he wasn't going to take no for an answer. But she didn't owe him anything…yes, she did, and to be honest, it would be nice to share it with someone.

She stared back at Max as he waited for her answer. He had started the car, and she could feel the full force of the heater on her body as it finally thawed out.

"Thank you. It certainly would be easier than the bus." Talia had not been looking forward to doing that.

"Perhaps we could get something to eat as well. Are you hungry, Charlie?" Max asked her nephew.

She chuckled at the look of confusion on Max's face. "MacDonald's," she explained.

He laughed. "Sure, Charlie, Maccy Dees it is."

They went for food first and then to the garden center to look at trees. It was freezing cold but Charlie didn't seem to notice it as he ran around the trees, looking for one he liked.

The scent of pine was prevalent, and she breathed it in. There were Christmas decorations everywhere. It was a happy place to be. Families walking around trying to decide on their trees, children very hyperactive, and the music that everyone loved at this time of year. It was like a giant playhouse for children.

"Thank you for this. It has been a fun evening."

"My pleasure. I've enjoyed myself," he said as they followed Charlie.

She laughed. "You don't have to say that. I have a feeling it's not something you've done before with an almost six-year-old hyperactive child."

"No," he said as he stopped, and she turned to look up at him, her eyes staring at his mouth as he spoke.

Her heart rate tripled to a speed that made her catch her breath. Despite the cold, she suddenly felt hot. When she looked back up to his eyes she saw that his pupils had darkened and she was useless to stop the kiss that she knew was coming.

He leaned in, and anticipation clutched her as his breath mingled with hers. The closer he got, the quicker her breathing became. It was like slow motion, a whisper, a touch away from feeling those wide, smooth lips on hers.

"Yes," she replied, her voice sounding as distant as the moon and stars above them in the darkness of the early evening.

"Yuck, are you two going to kiss?" a little boy's voice said.

Talia jumped and almost fell over. If it hadn't been for Max reaching out for her arm, she would have been sitting on the cold ground.

Max got himself together before she did. "Have you found a tree?" he asked Charlie, which was a good call on his part because her nephew forgot all about what he'd asked. He put his tiny, warm hand in hers and she wrapped her fingers around it.

"Come on, Aunty Tally. Come and see it."

She followed behind him, having no choice as Charlie held onto her hand so tightly. She could hear Max behind her, and she refrained from turning around to look at him.

They stopped suddenly, and Charlie stood next to a tree; not just any tree, but a humungous one.

"Honey, this is far too big for our house." Not to mention the price, she thought as she saw the tag.

His face went from smiling to sad in a split second, and she wanted so much to take away that sadness. He'd had more than his fair share of it.

Max must have seen the disappointment on his face. He went on his haunches and looked at Charlie. "This would never get through the front door, buddy. What about the one behind it?"

She looked at the one Max pointed out. It was a little smaller, but little was the operative word. Talia couldn't see the price tag on it, but she was certain she couldn't afford it.

Charlie went to have a look and gave it his approval by jumping up and down. "Yes, yes, this one, it's bushier. Look, Aunty Tally, it already has snow on it," he said as his whole body shook with excitement.

"Absolutely not," she said.

"Absolutely yes. Let me do this?"

For a moment, she watched as Charlie stood by Max. The little boy placed his hand in Max's, and she looked back up to the surprised expression on his face before he engulfed the small hand in his.

Emotion stung at her eyes. Charlie had bonded with Max, and she was worried what would happen when he went back to his home in America. Was it cruel? Should she pull him away? But Charlie looked so happy, and he'd had so much sadness in his short life.

And instead of saying no, she said, "Okay, thank you."

Charlie was beside himself with excitement, making her laugh.

"You've made a little boy very happy. I hope you'll still be smiling when you try to get that tree into the front room." She chuckled.

"Umm…perhaps we may have to bend the top a little," he said.

"You think?" she asked, smiling.

"Maybe a lot," he said as he stroked his short beard. He looked down at Charlie who was beaming back up at him. "But it will be worth it." 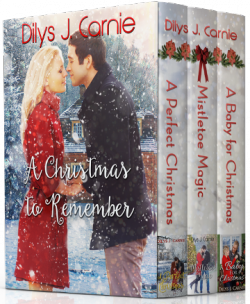 Straight Up (MFM)
Willa Edwards
In Shelf
$3.99
Tweets by
sirenbookstrand