Always and Forever Together

Can Maisy overcome the pain of her past and find happiness?

When Maisy sold her home in the UK and moved to the North Carolina coast with her much loved dog Elsa, she never imagined that she would find love. It certainly wasn't something she was looking for. Maisy doesn't want to be happy. After the loss and heartbreak of her recent past she doesn't believe she deserves happiness. She's just trying to get through each day the best she can.

Jarrod is mesmerized by the woman and her dog who walk past his beach house every day. When he realizes that they met one summer many years ago, it stirs up hidden emotions. But Maisy has been to hell and back and he isn't sure that she's ready for the instant chemistry between them.

Can Jarrod and Maisy find love beneath a thousand stars? 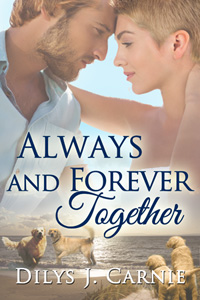 Always and Forever Together

There was a knock at the door, and Maisy quickly covered the painting up. In unison, she and Elsa both made a beeline for the door. She almost fell flat on her face as the dog moved in front of her.

Catching sight of herself in the seashell mirror over the small table by the door, she placed her hand over her mouth to stop herself from squealing out loud. Her hair was a mixture of green and yellow paint. She even had it down one side of her face, which looked much worse due to a crease down her cheek that must have come from the way she slept. Damn! She looked like she'd had a fight with a paint pot.

"Never again. Not one more drop of alcohol shall pass these lips. Water only from now on," she whispered while scowling at her reflection.

Elsa sat at her feet and watched her as if she'd gone mad. Maisy concluded she had.

"I know," Maisy said, looking at her. "I shouldn't have drank the whole bottle."

She leaned over to look out the open window, and Jarrod grinned at her. He winked playfully as he said, "Hi."

Elsa jumped up when she saw someone at the window, knocking Maisy over, and she tumbled to the floor.

"Oh my God," she shrieked as she landed on hard on her ass, Elsa licking her face.

"Hey, are you okay?" Jarrod asked as he opened the door. She couldn't believe she'd left the door unlocked, but then again she had been tipsy, so it shouldn't have surprised her.

The giant of a man leaned over her. Wearing well-worn Levis, a white t-shirt, sunglasses, and a sheepish smile, he was all male.

Maisy stared up at him, feeling small, and like a fool for just lying there, but she couldn't help it. He was so damn tall, and oozed sex, damn him. She was still drunk, she must be. She wanted it to be a dream, and not real. Geez, this day was starting off great.

"Elsa, get off, you great big lummox." She pushed her dog to one side.

Elsa sat looking at her with ears perked up.

"It's okay, baby. I'm all right." She caressed Elsa's head as she sat up. "Yes, I'm great, thanks," she answered Jarrod in a sarcastic tone as his large hands held her arms and helped her to her feet.

Taking off his sunglasses, Jarrod leaned down to look into her face with concern. With his gaze focused on her, Maisy tried not to stare back into those greens orbs that had always been her downfall. She knew how wild she must have appeared, but to give him credit, he didn't say a word.

His eyes were tinged with heat as they gazed at her parted lips, and no doubt he recalled the hot kiss they had shared. Hell, she remembered it just as well. Suddenly it was all she could think about: deep, delicious kisses.

The feeling of his hands on her skin reminded her of how he'd touched her, and the tingling in her lower abdomen was heading in a direction she hadn't felt in a very long time.

Oh, absolutely, on top of the world this morning. One thing she had to do was make it clear about last night. Because as much as she'd enjoyed meeting up with him, and, er, other things—even that goofy smile he had on his face now—she had to be honest with him.

She stepped back so she could be released from his hold. "About last night," she said as she clasped her hands together in front of her. "If I gave you the impression I was ready for…" Swallowing, Maisy couldn't look at him. She was so embarrassed she could feel her cheeks heating up.

"Kiss," he said, and she could hear the teasing tone in his voice.

"Yes, the kiss, I'm not in the right frame of mind for anything like that."

Jarrod didn't speak, and it un-nerved her; the silence was awful and made her feel much worse than the pounding headache she had from the hangover.

"It's nothing personal. You understand from what I told you yesterday, I'm not in that sort of place."

He didn't say anything, just continued to look at her, which made her feel mightily uncomfortable, because Maisy knew she had lied to herself. Because who wouldn't be interested in Mr. Handsome? Quite clearly, only someone who had on a blindfold.

She slid him a guarded look. "Look, Jarrod, I know I may have led you on, and I'm sorry, but seriously, I have nothing to offer you."

Maisy could tell he was fighting a smile. He reached down and slipped his fingers through her short hair. Mortification crept all the way to the tips of her toes when he pulled a lump of paint from the strands that were sticking up.

"I was painting until late last night," she explained.

He lifted an eyebrow and looked around the room.

"No, not the walls. I paint…you know, portraits, landscapes, anything."

Maisy realized she sounded like an out-of-breath schoolgirl; time to pull herself together. And, hey, she didn't have to explain how she looked or what she did to anyone.

When Elsa whined, she realized the poor dog was almost crossing her legs, so she opened the door for her to go out to the small yard. Turning back to the man who was far too tall and big for her little house, she folded her arms across her chest. Maisy noticed his eyes following her actions. She realized why as her nipples felt more than a little firm against the material of her t-shirt. Maisy knew he'd seen them.

"You've had a wasted journey."

"I have?" He raised an eyebrow.

Maisy nodded. "Yes, you see, there's never going to be a repeat of last night."

A deafening silence bounced around the room as Maisy waited for Jarrod to say something.

Finally, he spoke. "I'm happy to abide by your rules. However, I'm not here to repeat last night's little tête–à–tête."

"You're not?" A feeling of embarrassment overwhelmed her as she remembered how she'd just rattled on.

Her Knight in Shining Stone (MF)
Tamsin Baker
In Shelf
$2.99
Tweets by
sirenbookstrand