In the spirit of "It's a Wonderful Life," Kay LeGrand brings you a story that will make you laugh, make you cry, and make you believe in miracles all over again. 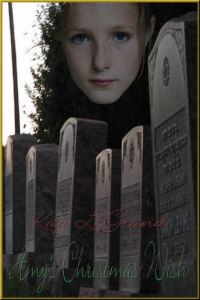 Off to the right, something moved. A shadow, creeping along the chain link fence that separated Moorpark Cemetery from the road and the frost-rimed swath of grass that marked the boundary of the living world.
Georgia touched the brake. By the time she corrected for another slide and brought the car to a stop at the edge of the pavement, the shadow had vanished. Only the wind stirred, flinging crystallized bits of snow before it, forming and re-forming them into patterns that at times looked almost human. A last few of autumn’s dried leaves skittered across the frozen crust, but nothing else--nothing living--moved in the night.
Ghost? she wondered, then hoped. A ghost would be good. It wouldn’t demand anything of her, wouldn’t remind her that she still had a duty, one she’d sworn to uphold, to investigate anything that seemed amiss in the night. A ghost would let her go on her way.
Of course, the dutiful part of her triumphed. She’d known it would.
Turning on her spotlight, she swept it in a slow arc across the embankment. Cone-shaped evergreen shrubs and tombstones leaped into nightmare relief. Skeletal arms of winter-dead branches cast shadows as monstrous and twisted as anything in Georgia’s haunted dreams. And the lurking figure near the fence could no longer hide, though she tried, darting from one shrub to another on her way to a gaping tear in the chain link.
“You there!” Lowering her window, Georgia trained the beam of light on the place where the fugitive huddled, trying to make herself invisible behind one of the smaller shrubs. “Come out where I can see you!”
The figure remained motionless.
“Come out,” she ordered again, her words almost lost in a frigid black blast that swept down off the mountain to buffet the car, and scour it with scratchy spumes of snow. “Now.”
The fugitive clutched her midsection. For a moment she stayed low, bent into the shelter of her shrub. Then, turning, she sprinted through the torn fence, into the cemetery.
“Damn.” Georgia shoved her door open. Her left hand grabbed up her flashlight, and the right went to her gun again. This time it stayed there, ready on the butt, in case this turned out to be some kind of ambush.
For a moment it seemed the girl had escaped. Nothing stirred in the cemetery…nothing but the wind-driven ice crystals that really did chip at the skin.
Halting when she reached the break in the fence, Georgia added the beam of her flashlight to the spotlight’s glare. “I know you’re there,” she called. “Now, come out. Nice and slow. Come out where I can see you.”
Still, nothing moved. If a scrap of bright bandanna hadn’t caught a stray beam from the spotlight, Georgia might have begun to consider the possibility of ghosts again.
“Look.” Tightening her grip on her gun, feet planted wide apart in ready-to-react stance, she directed the beam of her flashlight toward the bit of color, and the time-darkened tombstone that almost concealed it. “There’s no place you can go. Now, I’m giving you ten seconds to come out of there. Then I’m coming in after you.”
“Don’t shoot me.” The girl’s voice choked, thin and reedy, hoarse from exposure to the cold. Rising, she stepped into the open, one hand lifted to shield her eyes from the glare, the other held up, palm forward, at shoulder level in a gesture of surrender.
She was younger than Georgia had first thought, no more than nine or ten, and dressed for the summertime with only a lightweight jacket over her short denim skirt and a red bandanna shirt tied high around her waist. Georgia could almost hear her teeth rattle, even though thirty feet separated them.
“It’s freezing. Where’s your coat?”
“I ... forgot it. Just please, don’t shoot me.”
“Shoot you?” Switching off the flashlight, Georgia lifted both hands and held them away from her sides to show she meant no harm. “Why would I shoot you?”
“Isn’t that what you always do?”
Georgia’s stomach convulsed. She hadn’t meant to terrify the little girl. She’d only wanted to get her out of the cemetery, out of the cold--to protect her.
Like she’d ‘protected’ Zoe?