Wealthy and beautiful Millicent Forrester doesn’t need a man, much less an Earl. But when Millicent is suddenly left to raise her orphaned niece and nephew, her late sister-in-law’s brother arrives on the scene to take control.

Charles Nordfolk, the Earl of Sanhurst, is devastated by the loss of his sister at sea, but even more shocked at the Bohemian atmosphere in which she’s unwittingly left her children. Wresting the young orphans from beautiful, strong-willed Millicent in order to give them the proper British upbringing, however, is more difficult than it looks.

When the Earl manages to get the children removed to his country estate, he’s annoyed to discover that their aunt has accompanied them as a package deal and plans to upset his orderly existence until they can come to some sort of accommodation regarding the children. As the two opposites spar, they inevitably, as opposites do, attract. Will they both get what they don’t want…or what they do? 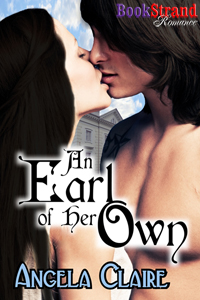 Heat Rating: Sensual
Word Count: 74,169
2 Ratings (5.0)
Historical Regency
In Bookshelf
In Cart
In Wish List
Available formats
ePub
Mobi
HTML
PDF
Cover Art by Christine Kirchoff
Reviews
This was a great book, very funny and sexy with a great chemistry between the hero (who I am in love with!) and the heroine! These characters are just perfect for this period and they way they fall in love is just a wonderful story!
Sam
Read more...
Excerpt

Sanhurst regarded Millicent with somewhat less of the passion he had been feeling out of nowhere just minutes ago. Well, not exactly out of nowhere. He’d had a dream or two about her these past few weeks, that was for certain. But out of nowhere in his waking hours. Or certainly without his volition. He thought of the feel of her mouth underneath his and the eager way she had lunged forward when he first took her in his arms.

And now she sat here so calmly accusing him of deviant practices and asking with her next breath if he intended to bed her. The little baggage. Just like her to string out his humiliation. She should have run from the room or swooned or some such thing.

Come to think of it, she had tried to exit, and he had stopped her. Now, why was that? It was not as if any good could come out of this rehashing of the debacle. But it was still so unsettled. He felt there was something he needed to say, needed to do. Apologize perhaps? No, that wasn’t it. He’d offered that, and she had not seemed duly impressed. He regarded the high color in her cheek bones. Perhaps she was embarrassed. He remembered the soft touch of her fingertips on his cheek.

By God, that was it! That was what was missing. She had touched him. That’s what had started it all. A very forward gesture on her part. He needed to point that out and instruct her as to proper behavior in the future so that this type of scene could be avoided. Too innocent to know what she was doing no doubt, she nonetheless was not entirely blameless for her unwittingly provocative behavior.

“We are still discussing it, Millicent, because it occurs to me that the event that precipitated our embrace cannot be overlooked.”

“The event? The children bidding you good night? What does that have to do with anything?”

“No, not the children bidding me good night. The, well, the aftermath of that. You see, Millicent”—he rather liked using her first name—“you touched your hand to my cheek.”

“I remember that distinctly. I was just trying to wipe the jam off.”

“And then you, well, you licked…” His voice actually broke. This was not having the intended effect of preventing a lapse in the future. On the contrary, the reliving of it was quite invigorating. He pushed forward steadfastly. “You licked your finger.”

She looked at him blankly. This was going to be a bit more difficult that he had anticipated. Just how innocent was she?

“You see, that kind of gesture can be quite suggestive,” he explained in what he hoped was his most helpful tone.

He hesitated. Perhaps suggestive had not been the right word to use with her.

“Relations? Was it suggestive of relations somehow? How? Pray tell. I am quite curious.”

Good God, she would drive him to Bedlam. If she said relations one more time, he would explode. He turned away and reached for the heavy crystal decanter of brandy, pouring himself a healthy dose and downing it before responding. She watched patiently, seeming in no hurry to leave anymore. It would serve her right if he gave her just the sort of information she was asking for. Maybe that would end this god-awful conversation, which had been precipitated by that god-awful, well actually wonderful, kiss.

“I’m just discussing this, Millicent, because I would hope we could avoid this kind of altercation in the future if you would take care to modify your behavior, and I fear you’re ignorant of what to avoid.”

“I gather licking is one thing to steer clear of.”

She looked at him as if he were the one who was mad.

“And touching me,” he added for good measure.

“Aha! So I was right. No touching the earl. You don’t like to be touched by women.”

“Well, no. I mean yes. But only a certain type of woman.”

“The kind you can kiss?”

“We’re getting off track now, Millicent.”

“I still don’t understand the licking reference. I suppose it must have to do with the tongue thing you seem so fond of. Together they must be suggestive of something. Relations, I postulated, but you didn’t respond, so we’re not quite clear on that point, are we?”

This was really becoming much too much.

“Fine, yes! If you must know, my curious little cat, it was suggestive of relations. I saw you put that finger in your mouth and lick it, and I thought of you licking me, and when I kissed you with my tongue, I thought of putting something else in that delicious mouth of yours! There! Are you satisfied now? I just articulated something that I never in all my days imagined articulating to a lady!” Unless she was in his bed, and even then, that was known to be a delicate subject. Some of his most adventurous lovers had still acted with some distaste in response to the nudge he occasionally gave in that direction. What had possessed him to allude to it with Millicent was beyond him. At least he appeared to have shut her up. She continued to look at him, considering.

“I’m trying to puzzle out what that means,” she finally said, not at all with any inflection other than a detached curiosity. What was he to do with this woman?

“Well, you’re not going to find out from me. I’ve done all the corrupting of innocents I intend to do today, if you’ll excuse me.” If he didn’t watch out, she’d have him giving her a detailed explanation, or worse yet, showing her.

“Am I corrupted now then?”

Mandy and the Cowboy Mogul (MF)
Angela Claire
In Shelf
$4.50