And So Is Love

For two years of his ten-year prison sentence, Dane Faulkner has been a man best left alone. When Bailey Lewis disturbs his solitude and becomes a target for the local bullies, Dane finds the best way to protect him is to stake his own claim. What happens when the pretence becomes something more? 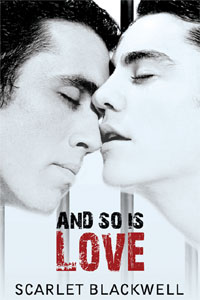 And So Is Love

"What's wrong?" came Bailey's voice below him from the dark.

"What are you thinking about?"

Bailey gave an exasperated grunt. "You're the most frustrating guy I ever met. You're cold and distant and you act like you have no emotions, but you don't fool me for a minute. You're needy and desperate. It's not wrong to admit that."

Dane almost caught his breath at the challenge. For a moment, he saw the scene. Scrambling down off his bunk, pinning Bailey to the bed and taking what he needed. And then he remembered Byron had done just the same and it was enough to quell the flames temporarily.

"Dane," Bailey said when he didn't reply and his voice was soft now. "Come sleep with me. I slept so well that night you held me in your arms."

Dane swallowed. The blood roared in his veins. When he jumped off the bunk, his legs felt weak and uncoordinated. As soon as he pulled the covers back, Bailey reached for him, pulling him close and Dane lay down, his head on his cellmate's chest, listening to the slow, steady beat of his heart. He let the sound fill his head as they lay motionless in the dark together and knew it would never leave him for the rest of his life.

"How long have you been here?"

Dane was surprised at this question. The fact that Bailey had never asked him this or anything else about his crime suggested that he already knew the facts from someone else, but maybe not.

Bailey gave a soft sigh. "How many times have you had sex in that time?"

"I already told you, Bailey, I'm not a fag," Dane said defensively.

"That wasn't the question, I asked you how many times."

Bailey's hand lifted his chin. "Does that mean I'm the first person in two years to kiss you?"

A radiant smile crossed Bailey's face, an almost innocent, childish smile. "I thought so. I knew you hadn't been kissed in so long."

Dane reddened, but he couldn't stop his traitorous mouth asking, "Am I the only person you've kissed while being in here or is there someone else?"

"Oh no." Bailey's fingers traced the curve of his cheek and ran across his lips. "There's only you, Dane. Byron took my body, but he didn't get my mouth."

Their gazes met intensely for the longest moment before Dane slid up and dragged Bailey into his arms, kissing him.

It was no less incredible the second time. Bailey pressed him backwards, lying on top of him, one leg between his, rock hard against his hip and his tongue sought Dane's.

Dane saw stars behind his closed eyes as he met it with his own and felt Bailey's breath in his mouth and his hands lightly holding his wrists down by his head. This excited Dane way more than it should have. He flexed his wrists and was rewarded by Bailey tightening his grip, his belly sliding against Dane's rigid cock, the friction agonisingly delicious.

He let out a little moan, much to his shame, and Bailey broke his mouth breathlessly from his before he kissed his way down his neck, letting his wrists go. Dane held his breath as Bailey moved down his body, sinuously sliding his naked torso slowly down his cock so Dane thought he would blow at the pressure against his aching tool.

Bailey's mouth found one nipple, licking and tonguing before drawing it inside, sucking it stiff so Dane's back arched helplessly and he grabbed at Bailey's hair. His cellmate didn't stop there, only carried his trek southwards, below the blanket. Dane felt his cock leaking as Bailey reached his stomach, pressing kisses on the line of dark hair which ran down to his groin before he mouthed his hard cock lightly where it rested against his belly through the thin material of his boxers.

Dane shuddered and tried to stop Bailey's hands as they pulled his boxers down. But his cock sprang free, some of the aching pressure released and his protests went unheeded.

Slowly, Bailey's lips nuzzled Dane's bush, moving onto his inner thighs before a warm, wet tongue swept over his balls.

Dane jerked in shock. He gripped Bailey's head and tried to pull him away, lifting the covers so he could see his face. "Don't." His voice was unsteady.

"Let me." Bailey stared up at him with his face ghostly in the dim light, his eyes jet black. "Let me suck you off. Please, Dane."