And the Lion Shall Lie with the Lamb (MM)

Day to day, Jason's convinced there’s no escape from domestic discord, but nighttime is a different story. In dreams, he escapes to a world beyond imagination, where there are giraffes as big as dinosaurs, and pretty felines dance with swaggering stags. Also in this world is Tavaris, the lion shifter Jason loves. With Tavaris, he feels safe and protected.

Will Jason have to return to his horrible life with Maurice tomorrow morning, or will Tavaris claim him at last? 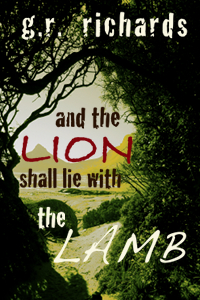 And the Lion Shall Lie with the Lamb (MM)

“Have I been here before?” Jason asked the ladybug, whose size seemed in constant flux now.

When they arrived at a clearing, the insect said, “You tell me.”

Jason stepped up on the raised tree root before him and gazed across the savannah. There seemed to be every type of earthscape possible represented in this place, from desert to plains to rain forest, and all so close you could walk from one to the next. The memory of this place was buried just deep enough that he couldn’t quite access it, but he knew it was there, and that knowing made him feel a little queasy.

All across the plains, animals roamed free. Giraffes the size of dinosaurs craned their necks up, munching on leafy foliage that grew back the moment it had been devoured. As he wandered through warm lush grasses, wolf cubs wrestled with goat kids as a kangaroo nanny watched them play. Jason couldn’t help but smile as he observed those fuzzy little cubs latching on to a goat kid’s tail, slipping onto their backs, and writhing side to side with the enthusiasm that only a baby animal could enjoy.

The ladybug continued on and, as though they were attached by a silver thread, Jason followed. He passed by cats walking tall on two legs, dressed in rumba skirts. They beckoned him to dance and when he shirked the offer, feeling sheepish and shy, they approached a group of stags, who eagerly set down their glasses of scotch to join them on the dance floor.

And then, in the rippling mirage sheen of a distant mound, Jason spotted the figure that brought all the memories streaming back to consciousness.