A seemingly lost little girl leads Bart to the scene of a horrible accident. As he consoles Sawyer, who crashed his bike into a New York City bus, he finds himself comforted instead when Sawyer offers him a pendant to keep him safe as he heads off to boot camp and eventually war.

More than a decade later, the pair are reunited on Thanksgiving Day, one on one side of a soup kitchen serving table, one on the other. They nearly miss each other, but fate -- or something else -- seems to want to bring them together.

It isn’t only on that day, either, but throughout the holiday season, during which Bart discovers the significance of the pendant and both men learn to believe in angels and second chances.

A loud sound from the other room made me jump. I heard cursing -- everyone must have -- just before Sawyer and some woman shot through the swinging door. The front of Sawyer’s apron and shirt were soaked. I could see right through the expensive fabric that clung to his chest. He was hairy, and apparently cold, judging by the pointiness of his nipples.

“Call somebody,” the woman said.

“Anyone know how to fix a leaky water pipe?” Sawyer asked with a crooked smile and a tone of urgency.

I looked around for raised hands. I still wondered where the little girl and her mother had gone. I never had found them, so I’d sat back down and shoveled down my food in record time. Neither of them were probably plumbers anyway. “I ... I can probably help,” I said.

“Bless you.” Sawyer was at my side. He reached out, and my heart stopped when I thought he was going to touch me. But then he put his arm back at his side, as if I was too far beneath him to allow that sort of contact.

“I’ll need tools,” I managed to say, my anxiousness and the rejection stifling my words.

“There are all kinds back there,” Sawyer said. He was leading the way, his wet shirt pulled tightly across his strong, broad shoulders and back. “I don’t much know what any of them do,” he admitted. “But hopefully one will be what you need.”

I felt the apprehension start to bubble in my chest and spread out like a small electrical current in every direction, up my arms, down my legs, and a prickly sensation at the top of my head as I knelt down on the floor. “You can go do whatever you need to be doing,” I said to the three standing over me. I hoped I hadn’t come off rude, but there seemed to be far too little air for far too many people. “I’ll be okay.”

I wasn’t under there long. Within a couple of minutes, I had tightened the connection and then wrapped it in silicone tape. Sawyer came back in just as I was washing up.

“Running water ... and only from the faucet. Good deal.”

“It’s a temporary fix. It should really be re-soldered, but this will hold for a little while.”

God! He was adorable when slightly befuddled. “Solder. Yeah. I don’t have the equipment, but I can do it.”

He could probably tell by the look on my face that asking a homeless dude for his cellphone number was a pretty dumb move.

“How about this?” he amended. “Leave me a very specific list of exactly what you need, and tell me when you can do the job. We’ll set it all up ... if you’re interested ... and also let me know your rate.”

I was only half listening by then, because Sawyer had bent over to get a small notebook and a pen from a lower shelf. When he’d done so, a pendant fell from the open collar of his shirt. It was a thick piece of round metal with the number 12, just the one I had lost. 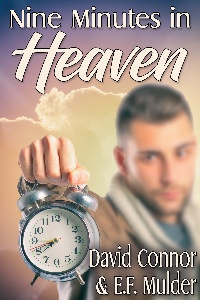