Angels Of The Night: Discovery

Allison Webber is tired of looking over her shoulder. Stalked by shadows for her entire life, she embraces the invitation to join a secret society hiding the existence of vampires. Things heat up quickly in this all male cult when she catches the eyes of two sexy vampire twins, Thane and Darcy Wallace. Amid steamy encounters with the identical twins competing for her attention, Allison learns her mission is to aid a select group of vampires, the Angels of the Night, as they hunt and destroy the females of their species. Completely taken with the brothers and her new role, she fails to see that one of the twins has been using her. Allison must delve deep within herself for the courage to save the brother she loves and destroy the one who betrayed her. 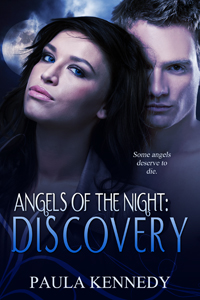 Angels Of The Night: Discovery

I awoke with a start when the Jeep stopped. As I thought about the dream, I wondered who Darcy had been talking about. Who had he wanted me to go to? And where had we been standing?

Pushing the strange message to the back of my mind, I thought of how it had felt to kiss him. I knew it wasn’t real but the sweet taste of his mouth seemed to linger. I licked my lips and looked sheepishly over at him.

Smirking as if he could read my thoughts, he threw the Jeep into park. Mere feet from the front of vehicle, a large expanse of blue water stretched for miles. Lake Superior was a frothy mess today and despite the heat, a cool wind off the water snaked its way through my cracked window to ruffle my hair.

We were parked in the sand at the bottom of Gros Cap hill. Several gulls swopped down suddenly, suspended in the wind that whipped the top of the water, and looked at us sideways before disappearing in to the air on another current.

“Good nap?” he asked as he opened the door and stepped out of the Jeep.

I chuckled to myself. “That’s one way of putting it.”

I jumped out of the Jeep and followed him through the metal gate meant to block access to the property. Large boulders, a few bushes and a lot of tall grass partially blocked the path but it was nothing that would hamper our hike.

After walking for a few minutes past the gate, we came to a spot where you could go right around the base of the hill and onto the Voyager Trail, straight up the hill, or left along the trail that snaked around along the water. As I had suspected we turned left and started on the trail along the base. The cliffs loomed overhead and scraggily bushes seemed to grow right out of the rocks.

My mind returned to the dream I had just had. Darcy had told me to go to him. Go to whom? Who was he talking about? I hated those kinds of dreams that didn’t make any sense.

I was pulled back to reality when my foot skidded on a patch of lose stone.

Whoa, I sure don’t want to fall.

The water was several feet below us at first but the farther we went the farther away the water became and the more nervous I was. It felt as though I was rushing to keep up with Darcy’s long strides and finally had to slow down. The trail narrowed considerably and the rocks had started to erode even more. I was stepping on more lose patches and each stride seemed to set a new sprinkle of rocks into the water below. Cringing, I stopped and watched a large rock tumble down the side of the hill before making a huge splash in the water. Darcy must have sensed that I was no longer right behind him because he stopped as well.

“Am I going too fast?” he asked over his shoulder.

I nodded but kept my eyes on my feet. “Just a little.”

He turned. “Let me carry you.”

I laughed. “No, it’s okay. I just need you to slow down.” I hadn’t been carried by anyone since I was a kid. No way.

My heart started to beat frantically and I looked up into his face. He held out his hands and although it was stupid, I actually considered his offer.

I shook my head. “No really. I’m fine.” I pushed his arms out of the way and was about to step around him when the trail beneath me gave way. He had me in his arms in an instant and his body was as hard as I remembered from my dream. I wrapped my arm around his neck instinctively and the first thing that hit me was how warm he felt.

He grinned widely. “What were you expecting? Cold and clammy?”

I laughed uncomfortably and then let my eyes, which were now level with his, examine his face. He became quiet and stared back at me. Even the wind calmed at that moment and my hair settled around my shoulders. Faint lines sprayed out from the corners of his eyes but other than that, his skin was flawless. My eyes wandered to his lips and the urge to kiss him was almost unbearable.

Was I crazy? Why the hell was I so attracted to him? Could my recent break up with asshole Darren be clouding my senses? Was I so desperate for a guy that my standards had fallen through the floor? Vampire? Really, Allison.

My hammering heart pushed the logical voice out of my head and I leaned in closer to him. Lifting my free hand to his cheek, I was surprised that his skin felt like silk under my fingertips. He was so warm, so soft, nothing like anything I had read. I played with the white blond hair of his eyebrows and he closed his eyes as I ran my finger across his eyelid. The skin there was like tissue paper, soft, delicate. Slowly he opened his eyes and stared back at me with the deepest brown eyes I had ever seen. Tracing my finger along his lips, I could feel air passing back and forth between them. My heart leapt with fear and excitement. He was so real. I leaned closer still and our noses touched. 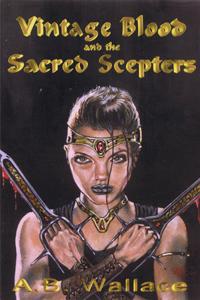 Vintage Blood and Sacred Scepters
A B Wallace
In Shelf
$0.99