Angels Of The Night: Divinity

Together with her vampire boyfriend's triplet, Robert, a dark vampire whose intentions are not entirely clear, and Thomas MacGregor, Allison’s faithful guardian friend, Allison Webber leaves her hometown to find Darcy Wallace and bring him home safely. An unexpected problem has surfaced, however, and a desperate plan is put in place. Allison must make the ultimate sacrifice to save Darcy but soon realizes this is only the beginning of her struggle. Her entire world is about to be shaken to the core by a coven of female vampires and Allison must put her faith, and her heart, in the hands of the one she fears most. 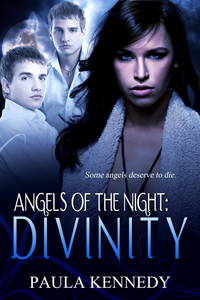 Angels Of The Night: Divinity

I tried not to hear him screaming.

I tried so hard not to see the wooden door tremble with each of his strikes. Tried not to image what he was going to do to me.

The large door, made of mammoth tree trunks strapped with blackened railroad ties, held one tiny barred window and a cast iron handle.

Reality rose around me in a crescendo when the wind held its breath again and I screamed at the sky. Exhausted, my throat raw, I noticed the fluff was falling back toward the earth as my cry faded. The dandelion seed, the tiny spaceship that had nearly escaped its earthly bonds, unexpectedly gave up its flight and floated leisurely downward. I wanted to yell at it, wanted to scream for it not to give up, but my voice was caught and all I could do was watch as its tiny body swirled and spun out of control. It plummeted toward the earth without a chance, without the loving caress of the wind, and disappeared in to the dried out hands of the grass.

Darcy shrieked from somewhere behind the door and threw his full weight against it. I could feel the icy fingers of his mind seeking mine but continually forced him out. He yelled hateful things, shrieked heart wrenching words that stung worse than the lash of a whip, and stared out from behind the bars with mercury eyes. I could hardly tear my gaze away and cast my eyes downwards.

The wooden door shuddered with his next blow and this time splintered. Pieces began to fall to the ground and the heavy metal hinges bulged from the assault.

Another ground-shaking blow impacted the wooden door and cracks began to form in the mortar around the cinderblock walls. I wasn't sure what was going to give first, the door or the walls.

As though in answer to my question, one of the hinges popped free and clanked off a rock before coming to a stop on my foot.

Kicking the tired metal hinge away, I pulled at my restraints futilely and examined the metal chair I was strapped to. I was bound to a metal chair whose legs were encased in cement. The tree line was miles away on either side. This location, this crime scene, had been carefully planned, carefully prepared. There was no one to help, no one to untie my bindings

Silver eyes stared out from behind the door again and a grin spread across Darcy's beautiful face. My body went numb.