Chance Northridge left Los Lobos more than ten years ago, deserting his family and his young, unclaimed mate. Now he’s back, upsetting their world. But those he left behind don’t understand that the pack’s former insane Alpha threatened everything Chance cared about in the world. Still, he’s got some big-time groveling ahead of him. Julie Pembroke has struggled hard to forget her disloyal mate’s desertion and to gain acceptance in the pack as a woman on her own, and making a new life for herself. When disaster strikes his family and endangers Julie’s life, can Chance prove himself worthy of a place in the pack and in his mate’s heart?

He sniffed the air. The scent of cinnamon and vanilla filled his nose and shot straight to his brain—and points south. A fragrance he knew well. Would never forget. The scent pressed all his buttons, triggered every wolfy response. Mate. A scent now tinged by the iron whiff of blood…and the heavy acrid sting of fear. Find. Protect.

Pulse pounding and heart in his mouth, he shifted instantly and bounded off into the dark woods.

A large figure blotted out the sun and crouched above her, growling. Another wolf, then. She could only hope someone from Los Lobos had chanced upon her, and not a feral wolf or some other predator. She wished she could see better, discern the animal’s color and markings. A thick muzzle nudged her side. It released a series of guttural growls and grunts, as if the beast tried to speak to her.

Huge jaws opened and clamped around her belt. She held her breath. The beast’s long, sharp canines didn’t tear her to shreds. Instead, the other tugged on her belt, dragging, pulling, and lifting her out of the ravine. She screamed with excruciating pain. Nausea overwhelmed her. Gulping another breath of fresh air, she steeled herself to keep from blacking out.

Suddenly the other wolf’s scent enveloped and overwhelmed her, awareness jackknifing through her. Not the least foreign. Totally familiar. Playing through all her memories and dreams. No, no. It couldn’t be. She squeezed her eyes closed. Smoke and white sage, pure masculine sex appeal. She’d know his scent anywhere. Her whole body awoke. Shook. Bringing with it a renewed surge of agony. A different kind of tension also took hold. In the midst of all her pain and horror…lust. The recognition stunned her.

A ripple of silver-white energy shimmered in the air and a megawatt bolt of power surged into her. A hand appeared on her shoulder where the paw had been. She couldn’t deny her rescuer’s identity. Darkness began to claim her. 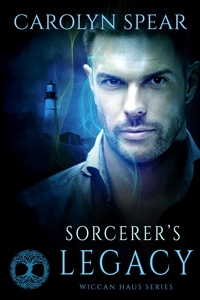