Ten years ago Aubrey St. Clair, Viscount Rothton, watched the man of his dreams Daniel Blake, the Earl of Graystone, walk out of his life after a brief sexual encounter.

Now Graystone returns to London after the death of his wife, and Aubrey is given another chance with his dream man.

But Daniel is determined he will have only one night of sexual bliss with Aubrey and then they must once more go their separate ways. 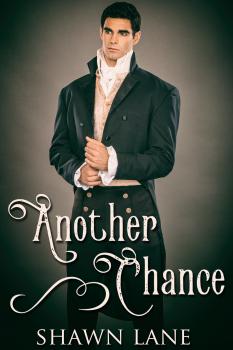 Daniel took the last step into the ballroom. The place swarmed with people. Men all dressed in formal black, ladies in spring colors. Not unlike insects, really.

He’d nearly forgotten how tedious these affairs could be. Almost always were. No hope for it though. Perhaps if he were lucky he’d come across someone he knew.

It didn’t take long before the heads of nearby women turned toward him. After all, Daniel mused, he was an earl. And a wealthy widowed one at that. No doubt the buzzing insects could almost taste him.

He turned away from the nearest crowd, looking for a place he might escape. The card room might be best. He took a few steps in that direction and then stopped.

Directly in front of him, only mere feet away, coming out of a long hallway ... Aubrey St. Clair.

Daniel stood frozen in place. His mind blanked and he was unable to form a thought. At least one that made any sense.

He swallowed the lump forming in his throat.

Lord, he’s still as gorgeous as ever.

Merely handsome didn’t really cover Aubrey. Daniel wasn’t entirely sure gorgeous was enough. The same silky, dark brown tousled locks, the brown eyes darker than any eyes he’d ever seen, nearly black and so intense. Full lips ... and dimples. The kind of sheer masculine beauty that would make every woman there desperate to make him hers. Daniel clenched his fists.

He hadn’t seen Aubrey since the night his father died, yet seeing him now affected him the way it always did. Daniel was rock-hard.

And there coming from the hallway mere moments behind Aubrey was Lady Whittington. Apparently the rumors were true. The two were lovers.

Daniel exhaled. He forced himself to turn his back to them, resisting the nearly unbearable urge to rub the spot on his chest where his heart beat painfully.

Why hadn’t he paid attention to those rumors when he accepted Lady Whittington’s invitation? Hell, it was even rumored that Aubrey fathered her children. Had he realized he would see Aubrey he would have stayed away. Or would he?

Daniel wondered if it was too late to escape. Could he now make his escape and pretend he never arrived? He closed his eyes. Aubrey had looked right at him. He didn’t miss the subtle widening of those intense eyes.

His already aching cock throbbed at the sound of Aubrey’s warm, deep voice. He was in trouble. Turning around, he faced him.

The man was sin walking and talking.

“It’s been a long time,” Aubrey murmured. His gaze went somewhere over Daniel’s shoulder as though he couldn’t quite bring himself to look directly at him.

“Ten years.” Daniel swallowed. “You look ... well.” Lame, he knew but he didn’t think Aubrey would appreciate him saying you look edible.

Aubrey continued to look at a point past him. “I’m sorry about Isabel.”

“Thank you. She ...” Daniel paused, his breath shuddered. “She ... went rather peacefully in the end.”

Finally Aubrey’s eyes met his. Their dark intensity blazed. Behind their depths was a bit of sorrow and uncertainty. Vulnerability. Daniel wouldn’t have believed it possible for Aubrey to be more attractive than he was ten years ago but he was. Incredibly so.

They lapsed into an awkward silence, each one of them just staring.

“I think I need some air,” Daniel said. He inclined his head in the direction of the double doors leading to a balcony. “Want to join me?”

Aubrey nodded, then turned to search the room with his gaze. Looking for Lady Whittington, Daniel guessed. The lady in question had moved on and was involved in a conversation with two other ladies.

Daniel led the way and opened the doors, stepping outside. The night air was warm with a slight breeze. He smelled citrus blossoms, one of his favorite scents of the season. He walked up to the railing and leaned on it, looking out at the Whittingtons’ garden.

Aubrey stood beside him and reached into his coat, withdrawing two cheroots. He offered one to Daniel.

Daniel shook his head. “No, thank you. I never smoke those.”

Aubrey snorted. “Why am I not surprised?”

Daniel tightened his jaw. “No. You meant something, Aubrey. What?”

Aubrey shrugged and turned his back on the garden, crossing his arms. “You were always just a bit better than the rest of us.”

“What?” He straightened and glared.

“Whenever someone suggested doing anything a little different, you balked. You acted like you were above everyone else.”

“You did. You hated every minute of it. You wouldn’t wager more than a few coins and wondered when we were leaving almost the moment we walked in.” Aubrey smiled a bit. “I’m still not sure why you agreed.”

He’d wanted to spend time with Aubrey. Daniel had no intention of telling him that though. It didn’t matter, he thought. If Aubrey wanted to think badly of him, so what? This was pointless.

“Forget it,” he muttered. He walked toward the double doors.

“Going to walk away from me again, Daniel?”

Remember Him (MM)
Bellann Summer
In Shelf
$4.50
Tweets by
sirenbookstrand