It’s the year 1934, and slavery has ended. Emancipation has finally come to the Caribbean island of Antigua. However, slavery’s hold still lingers, though in different ways for the spirit of a murdered slave girl, the soul of a disillusioned Anglican minister, and a mute Antiguan boy, silenced by a blow in his early youth. Each of these three are captive to sorrows, regret and pain. And when each is faced with letting Manley, a cruel bar owner and former plantation manager, die in a fiery inferno, they must each choose. Will their final choices be based on hate and revenge or faith and courage . What they decide will lead to redemption and release from the island, or leave them forever imprisoned in bitterness and hate. 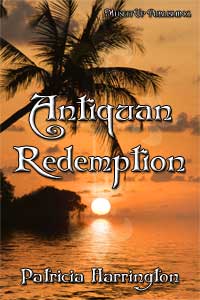 Songas shook his head at his thoughts. Things weren’t much better now. Most of the sugar plantations were gone, and work was hard to get because there was a Depression that beat down on even his little, tiny island.

“Man’s a fool, if he thinks being free and hungry is good.”

Songas shrugged and shut out his bitter thoughts before they could eat away on him.

The donkey trotted faster as they drew closer to the hut, and Songas stared straight ahead, hoping to pass by quickly with no trouble. Every hair on his body rose in alarm, and he slapped the reins again. Suddenly, the wagon lurched, and he felt a weight drop into the seat beside him. He edged away from the presence that had joined him, his heart struggling to escape, but locked inside his body, it could only beat wildly. Fearful, Songas didn’t look around, nor did he dare jump off the wagon. The load of stolen rum from the Portuguese’s distillery was worth his life if it didn’t reach Manley’s. It was his first time delivering for him, and everyone knew he was a mean man. Songas wanted to touch the amulet again, seek its protection, but he couldn’t move his hands from the reins.

He waited, but no sign came from the presence now sitting close beside him. After a while the donkey settled into a steady plodding pace, and Songas sensed that what sat next to him, meant no harm. Little by little, he relaxed, and his thoughts drifted to the hut, that place of evil. Then he felt the presence beside him stiffen and become agitated.

A wail rose to the sky, thin like a reed, cracking at its apex and then falling, broken, into the wagon. Scenes from Cassie’s final days and hours of agony flashed in Songas’ head; he saw her clawing at the hut door, with thin strands of light seeping through the cracks in the hut’s walls and roof, and then the smeared blood on her lips as she gnawed on her own arm for drink and food. A feeling of anguish gripped Songas so hard he bent over in pain, digging his fingernails into his palms. He couldn’t turn away from the horrific images or shut them down.

The sights and the pitiful sounds filling his ears, flooded his soul, and Songas sobbed until he was exhausted and could stand them no more. Then they faded away, and he slumped over. After a while, he became dimly aware, his skin tingling, that the presence was lightly stroking his knee, comforting him. Songas straightened, knowing as sure as if he’d read it in the Reverend’s black, holy book, that Cassie the slave girl was sitting next to him. And he also knew now he needn't fear her. Like him, she’d been seeking a friend for a long time, someone who would understand.

He drove the rest of the way in companionable silence.

Songas tied up behind Manley’s Bar and knocked on the back entrance to the kitchen. He nodded to the boy who opened the door and then slipped inside. He could see from the kitchen that the bar was crowded and smoky with loud voices and louder music. The place was popular with the yachtsmen and crews who’d come to sail in the regatta. Manley’s Bar was set back on a road overlooking Darkwood Beach on the west side of the island. The bar was far removed from the crowded quay at English Harbor and also from the scrutiny of the local constabulary. Manley spotted Songas and came over. “You’re late.” He leaned close. “You’ve got the rum?”

Songas nodded and jerked his head toward the back door.

“Well. Get it inside. I can’t tap it sitting out in your damn wagon.”

With the help of the kitchen worker, Songas wrestled the barrels off the wagon and took them into the kitchen. Manley took out a key ring and unlocked the storeroom door that opened unto the kitchen. The storeroom had one small window covered with iron grillwork. Manley had made sure no one could steal his provisions. His pale blue eyes reflected no emotion as he watched Songas wheel in the barrels.

He grunted with satisfaction after Songas manhandled the last barrel into the storeroom. “My customers will pay through the nose for this rum. Three of the yacht crews are from the States, and the country’s gone daft with its stupid Prohibition. The boats just docked at English Harbor, and their crews will be heading here as soon as they find transport.” He smiled without mirth. “The men will be making up for lost drinking.”

On his way home to Five Island Village, Songas spoke to Cassie, voicing the words in his mind.

“I’m sorry for what happened to you. Seems as how you wouldn’t want to hang around a place where you was hurt so bad. Don’t make no sense.”

Suddenly, Songas had an image of a pretty girl, skin the color of honey, belly large, being pushed and dragged by two boss nigras from the road toward the hut, its door opened wide. Inside it was dark, an empty tomb.

Nearby, the bakkra sat on his horse, his face impassive, his blue eyes, cold.

Songas heard Cassie scream, “Massa, I be good, I be good. I don’ take lady’s brooch!”

The girl struggled and almost tore from the men’s grasp, but they held on to her, and reaching the doorway, flung her inside. Before she could get to her feet, they slammed the door shut. Then they nailed wood slats across the door until it was fortified against the young woman’s pounding fists.

Songas put his hands over his ears but couldn’t shut out Cassie’s cries or her fists beating on the door as the men left.

Later that night, Songas lay on his mat, but sleep wouldn’t come. He gradually became aware that Cassie had entered his small house and stood near him. After a moment, she lay down on the floor a few feet from him. A small thrill of contentment rippled through Songas. He knew Cassie wasn’t going away.

He smiled for her sake.
“If I could make it more better for you, after all this time, I would.”