Samantha is a technopath. In a post-apocalyptic world where all technology has declared war on humanity, she has the unparalleled ability to obliterate the tech-monsters, one threat at a time. But it comes with a costly price tag…

Rodney Connelly discovered Sam and works to protect her from those who would abuse her powers. After all, she’d saved his life…

General Lieberman, self-proclaimed leader of the small unit of combat soldiers, has observed what the technopath can do and believes Sam can create as well as destroy. And he’s determined to exact the maximum—no matter the cost. There is one problem. The level of power Sam must use to create the monster may cost her life. Will she make the ultimate sacrifice to save the world? 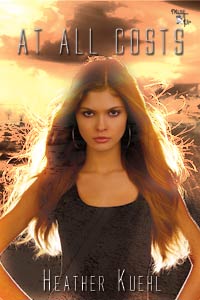 The sound of gunfire woke Samantha from the most peaceful of dreams. She had been at the shores of the lake she visited as a child, soaking up the sun’s rays. Families cooked hamburgers and hotdogs on their grills; the smell made Sam's eager stomach grumble even in her dreams. Birds sang in the background as the sound of children's laughter reached her. The wind breezed through the trees, and for the first time in years, Sam felt at peace.

Samantha shoved her boots on as the dream quickly faded. Tears pricked her eyes as she tried to remember how the sun felt and what birds sounded like. It was another lifetime, she thought, as she left the safety of her Kevlar tent.
They were attacking again. It was what they always did. They wanted Earth to themselves, needed the earth's natural resources to survive, and the human race was just the infestation standing in their way. The entire world had been taken by surprise ten years ago, when every technological device turned against them. There was no final showdown, like in those ridiculous movies that the last president of the United States starred in. It was a steady takeover until the day they showed themselves. And by then it was too late.