At Your Service (MM)

Danny's friend Jen is always trying to play match-maker, looking for the perfect guy for him. When they stop at a restaurant for an early dinner, she decides their waiter Todd is "The One." He's sexy, cute, flirty ... and obviously interested in Danny.

Jen conspires with another employee to get the waiter's number, determined to hook Todd up with her friend.

Danny doesn't know whether to be grateful for her help, or mortified at the lengths she'll go to just to get him a date.

At Your Service (MM)

Fallen Angel Reviews: 4 out of 5.
"This story is short, sweet with a plot that will please anyone who loves a love story with a happy ending."

Joyfully Reviewed:
"Another example of how well J.M. Snyder does romance with realism. The sexual chemistry and tension is great without so much as a kiss between them ... short and sweet and has just the right amount of sexy, fun romance."

Love Romances & More Reviews: 3 out of 5.
"This reviewer enjoyed this short tale. She loved the zaniness of Jen, the hero’s best friend. She’s crazy and not afraid to speak her mind, or get what her best friend deserves ... an enjoyable short story and this reviewer would recommend reading this and others by JM Snyder. "

Two Lips Reviews: 4 out of 5, with a "heat level" of 1.5 out of 3.
"This time around you meet the shy Danny, his not so shy friend Jen, and a cute waiter that changes everything. Thought I would have liked to have seen this story fleshed out more, it was a nice way to wet the appetite and show that J.M. Snyder is an author you will never forget."

The waiter comes back a few minutes later, glaring at us as if he thought we were going to leave and he's mad we didn't. With a sigh, he sets out silverware. "I'll be your waiter tonight. My name is --"

"Todd," someone behind him says.

I look up to find another waiter pushing Evan aside. Now this one is cute, with wispy blonde curls and tan skin and dark eyes that light up the room when he smiles. And he's smiling now, smiling at me, as he takes our napkins from Evan.

"Todd, at your service. I'll be your waiter tonight."

"This is my table," Evan starts, but Todd kicks him in the shin and he bends down to rub his leg. "Ow! Fuck, Todd." When Jen giggles, he frowns at us. "You're working the other side of the room, remember?"

Todd lowers his voice and turns away as if he doesn't want us to overhear. "Take one of my tables."

Evan's still frowning like he thinks it's a bad idea to switch.

Do it, I want to say, because Todd's a cutie and he smiled at me. I want him to smile again. He's so close, my menu brushes his wrist, and I watch the way the fine hairs on his arm stand up beneath the lamented paper when I move my hands.

In a heated whisper, Todd says, "Just this once, Evan. Please."

"Fine." Evan glares at us one last time like we're to blame, then stalks away.

When Todd turns to us again, that smile is back, and I can't help but grin at him. He's got a sexy way about him, and me, I'm glad Evan is gone.

Rolling his eyes, Todd leans down over the table and says, "Sorry about that, folks. You two ready to order?"

Jen points at the Jack Daniels chicken. "Can I have this?"

Jen's eyes widen and I think, Great. Out of chicken. There goes half the shit on the menu.

Then, in the same voice, Todd tells her, "I'm just kidding."

I laugh at the confusion on her face and Todd smiles again. He waves the question away. "Nothing." Still grinning, he winks my way. "You want the JD chicken?"

She nods and he turns to me. "What about you, handsome?"

My face heats at his words and I stare at the menu, unsure what it is I want. Him, I think, but he's not on the menu. "You had me there for a minute there about the chicken. That was a good one." 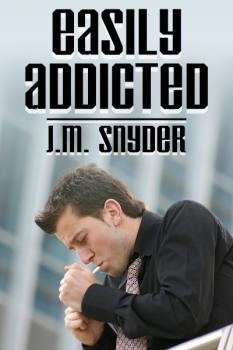 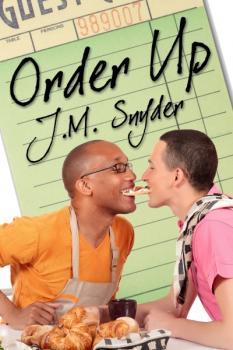