Aurora Atherton has been pining over Doms Mike and Mackenzie "Mac" Tanner for a whole year, but they have never given her the time of day. She is worried that the boys in high school and college were right about her being frigid and is resigned to being alone for the rest of her life.

But then a guardian angel by the name of Turner Pike steps in and sets the trio up.

Even though the three people begin a relationship, there are still issues to be worked out before the boat stops rocking.

Will the two Doms get through the walls around their little sub? Or will issues from the past impinge on their relationship?

Danger comes calling and it’s a race against time to rescue Aurora from the clutches of malevolence. Their woman’s life is in peril and they have to get to her before it’s too late.

Aurora had actually taken the time to put on makeup for tonight. She had dark smudges beneath her eyes and still had some bruising on her cheek that she was trying to hide, and because she wasn’t sleeping, she was so anxious she wasn’t eating much either. The thought of food made her feel physically ill, and she only managed a few bites to eat over the last five days. She let the smile fall from her face as the latest members to enter disappeared through the internal double doors to the club, and she lowered herself into the chair with a sigh.

Masters Matt and Luke were taking turns being with her at the reception counter, and Master Luke was currently speaking on the phone. When he shifted she glanced over to see him watching her with a frown. She looked away quickly and cursed the heat suffusing her cheeks. Aurora had attempted a scene with him and his brother, and she hadn’t felt a thing when they had played with her. She was deeply embarrassed over that incident and had hoped she wouldn’t have to spend much time with them, but it seemed she was being thwarted in all directions lately.

What the hell is wrong with me? Why can’t I feel anything when I submit? I know I’m submissive inside, so why can’t I let go?

Aurora felt like she would never experience the deep-seated need of true submission and wondered if she was just wasting her time. Maybe all those boys in high school and college were right. Maybe I am just so fucking cold inside that nobody will ever get through the layers of ice. The word frigid hovered on the edges of her mind.

Master Turner had taken her aside quite a few months back and suggested she not play in the club until she was truly ready. She could remember that conversation like it was yesterday and didn’t think she would ever forget it. God, she was so naïve. How the hell had he known how she felt? She had been so careful and tried not to let on to anyone what her feelings were, but it seemed her efforts had been futile. Sometimes she wished she had never discovered the world of BDSM. If she hadn’t, maybe she would be in a vanilla relationship and happy enough with her lot, because she wouldn’t have known what was missing.

“Aurora, why do you persist trying to scene with Doms you have no connection to?” Master Turner asked.

Master Turner sighed. “You, little sub, have a very loving heart. We both know that no matter how hard you try, no one but the men you love will be able to make you react. You aren’t ready to play with other Doms, Aurora. I would really appreciate it if you didn’t play unless your heart was in it, honey. You are damaging my Doms’ egos.”

Aurora’s face flushed. She lowered her eyes and shifted uncomfortably.

“Will you do something for me?” Master Turner asked and waited for her to meet his eyes.

“I want you to think about playing out a scene with Masters Mike and Mac.” He held up his hand and gave her a stern look when she opened her mouth to interrupt. “Don’t interrupt me, sub. We both know you want to, Aurora, so please don’t you dare insult my integrity by denying it. You are the sort of woman who will love once and deeply. You won’t ever be able to endure another’s touch. Please, just go and ask them to top you. But if you can’t find the courage you need to face the men you care for, don’t ask or accept scene plays from other Doms unless you can give them your true submission.”

Aurora didn’t know how to respond to or face such blatant truthfulness. She tried to lower her head, but Master Turner reached out, cupping her chin to stop the action.

“I’m not trying to hurt you, Aurora, but if you continue on the way you have, you may end up doing more damage than good. How are you going to feel if you finally find a Dom who can reach you physically? I know you, sub. You are going to tear yourself up inside if you give yourself to a man or men you don’t love. You will never be able to look yourself in a mirror again. You will feel like you have betrayed your heart and soul. Give them time, honey. They will come around eventually, and the wait will be worth it.

“Don’t ever doubt the passion you have buried deep inside. It’s there just waiting for the right men to tap into. You are a true submissive, Aurora, but you need to have your heart engaged to give up that tight control.”

Master Turner took hold of her hand. “Now, why don’t we go and sit at the bar for a while. We can share a drink, and I want you to relax for a few minutes and think about what I’ve said.”

Master Turner helped her onto a stool and ordered her a drink. She sat and thought over everything he had said and knew he was right. She wasn’t in love with Masters Luke and Matt, so she had been locked up tighter than a chastity belt inside. Making the decision then and there to not play in another scene was like a weight lifting from her shoulders. There were only two men she wanted to be with, and no one else would ever do.

How she was able to move on legs that felt like the consistency of wet noodles she had no clue. When she was in position, draped across it, she held still while they secured her wrists and ankles with the cuffs. Her mind raced as she wondered what they were going to do to her. Her body ached to be filled by them, but she wasn’t sure she should let them. They had ignored her for so long. Why all of a sudden were they willing to see to her needs now?

“You have been a very bad little sub. Will you take your punishment and please your Doms?” Master Mac asked in a low voice.

“Yes, Master,” she responded before she could stop herself. Aurora wanted to ask them why they wanted to play with her now, but knew if she spoke out of turn she would displease the two Doms and earn more punishment.

Warm hands caressed her ass cheeks, and it took everything she had not to wriggle or thrust her ass up into Master Mike’s hands.

“Do you know why we’re going to punish you, Aurora?”

Smack. Aurora gasped as a hard hand slapped her ass. The sting radiated heat into her flesh, and the vibrations caused her clit to throb.

“You need to be punished for letting other Doms play with you. If I ever catch you with another man there will be hell to pay, baby.” He landed smack after smack on her ass, raining blows on each cheek alternately but never alighting in the same place.

The tension seeped from her body and she became more relaxed with each swat. After the tenth blow, the stinging pain seemed to morph into pleasurable tingles which reverberated from her butt cheeks and traveled around to her pussy. She inhaled deeply and sank into the calm sea of sensation. Her awareness was of her own needy body and the two Doms in the room with her.

Fingers caressed her slit, rubbing through her swollen, wet tissue and up to her engorged nub. Hallelujah, I have a wet pussy. If I can get turned on then that must mean I’m not frigid. Her clit throbbed in time with her rapid heartbeat and her cunt clenched as if begging to be filled.

“So fucking wet,” Master Mac rasped. “You like getting your ass spanked, don’t you, sub?”

“Yes, Master,” Aurora replied.Was that my voice sounding so dreamy and breathy?

“No one else can make you wet for them, can they, baby?” Master Mike asked as he slapped her ass again.

“Such an honest little sub.” His hands smoothed over her ass cheeks, making them tingle even more.

She sobbed with arousal and hoped they would make her come. She was so hot, wet, and achy, and she knew only these two men would be able to quench the fire burning inside.

“When was the last time you had sex, honey?” Master Mac asked.

“I–I…” Aurora stammered, and then she cried out when a finger drew small circles on top of her clit.

The hands caressing her ass stopped and the finger massaging her clit halted.

“Are you a virgin, sub?” Master Mac asked in a hoarse voice.

The finger working her clit began to rub, starting off slow and gathering speed while the hands on her ass gripped and kneaded it, separating her cheeks and stretching her asshole. Aurora whimpered as another finger rimmed around her pussy, gathering cream and creating blissful pleasure. Then that finger began to penetrate her body and the one on her clit moved faster and faster. Her internal walls rippled, sending more cream to drip from her vagina. Her womb grew heavy and her blood heated as her insides grew tauter and tauter. The further the finger slid inside her cunt, the more her need grew, and she tried to force that digit in more. Another slap landed on her ass, this one much harder than the preceding smacks. She cried out when the finger was withdrawn but then mewed with delight as two were pressed inside her body. Then they began to move. In and out they thrust, stretching and caressing her wet flesh while sending shards of pleasure coursing through her.

The tension inside her grew in mammoth proportions until she felt like she was on the edge looking over the cliff face. And then she was there, right on the precipice, gasping in great gulps of air as she tried to fill her lungs.

Aurora screamed as bliss assailed her from all sides. Fingers rubbed against her asshole, lighting her up, as others pumped in and out of her pussy and rubbed her clit. 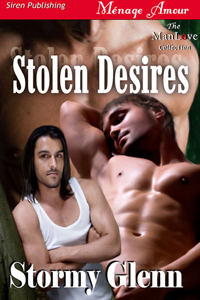 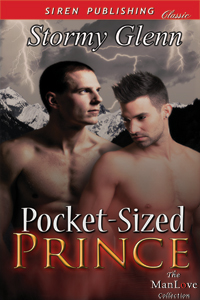 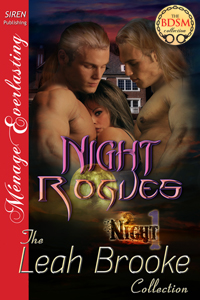 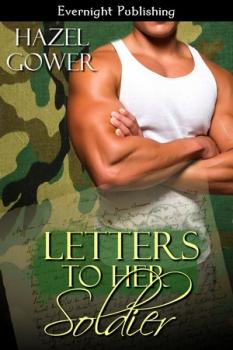 Letters to Her Soldier (MF)
Hazel Gower
In Shelf
$3.99 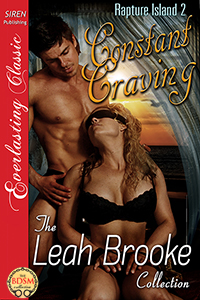