The characters from Surprise Gifts return for another kinky adventure. Former NFL defensive lineman Brad Williams only agrees to put on his old football uniform and take part in a charity bachelor auction when his boyfriend, Nick Dailey, promises to bid on him. But when the auction begins, Nick is nowhere to be found, and to make matters worse, an obese woman in the fourth row keeps topping everyone’s bid.

Fortunately it turns out she’s bidding for Nick, who has been busy setting up a post-auction candlelit picnic. But Brad soon discovers the food is just the appetizer, and he’s the main course. Before long, his wrists are bound above his head and he’s teased with various sex toys until he gets his just desserts. 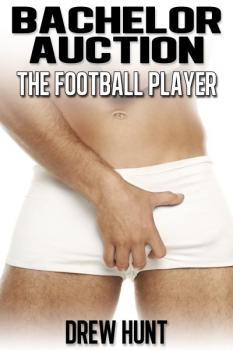 “And what am I bid for this finest example of USDA grade A African American beefcake? And see how he’s so perfectly packaged in his football uniform?” the auctioneer asked, wrists flapping and bangles clattering.

As soon as he’d stepped on stage, Brad had insisted the auction be delayed, or maybe he could be bid on later on, like the guy had wanted in the first place. Anything to delay things until Nick showed up. But the auctioneer had batted away all of Brad’s objections, insisting the show had to go on.

“And what’s more, ladies, gentlemen, and those who haven’t yet decided, Brad’s uniform is genuine.”

“Show us what’s underneath it!” someone yelled out.

Brad glared at the guy from behind his facemask, but the auctioneer ignored it and lifted the hem of Brad’s jersey to whoops of joy from the crowd.

“See these killer abs, folks? Just think, if you’re the lucky guy tonight, you’ll be kissing these cobblestones. Can you imagine dipping your tongue, or something else warm and wet into the spaces between these cut abs?”

There were roars of approval from the crowd.

Brad clenched his fists. If this twerp puts his pierced tongue or his dick anywhere near my chest I’ll break every bone in his body!

But thankfully the man let go the hem on Brad’s jersey, much to the crowd’s disapproval. But then immediately his hand latched onto Brad’s right sleeve.

“But, oh, no, wait just a minute. Brad’s killer abs aren’t the only muscles you could be feasting on tonight. No --”

“His big, black dick!” someone shouted out. “Say, is that a pair of socks in your pants, Brad?”

Addressing the crowd, a pleased smile on his face, the auctioneer said, “Well, if you’re the lucky bidder tonight, you’ll find out, won’t you?” The man then turned back to Brad, rolled up the sleeve, and gave his biceps a squeeze. “Think about it, boys and girls, Brad’s big, beefy biceps could be wrapped around you tonight.” Turning back to the audience, the man asked, “So, come on, people, it’s time to start the bidding. What will you offer me for the big, bad, bodacious owner of The Other Team?”

“I got a three dollar bill,” one guy near the front called out, waving said bill in the air.

This raised a laugh among the crowd.

Brad gave them a glare then took another look around for Nick.

“Twenty dollars!” a woman called out.

Brad looked around to locate the voice and found, to his horror, it belonged to Penny’s mother. Penny’s three-hundred pounds of wobbling lard mother. Brad didn’t do women. What the fuck did the mother of Nick’s best friend and employee not understand about gay sports bars and gay bachelor auctions?

A weedy guy off to Brad’s left bid thirty dollars. At least he was male, but he wasn’t Nick. Where the fuck is Nick? Brad scanned the crowd yet again.

Mate of the Wild Alpha (MM)
Marcy Jacks
In Shelf
$4.99
Tweets by
sirenbookstrand